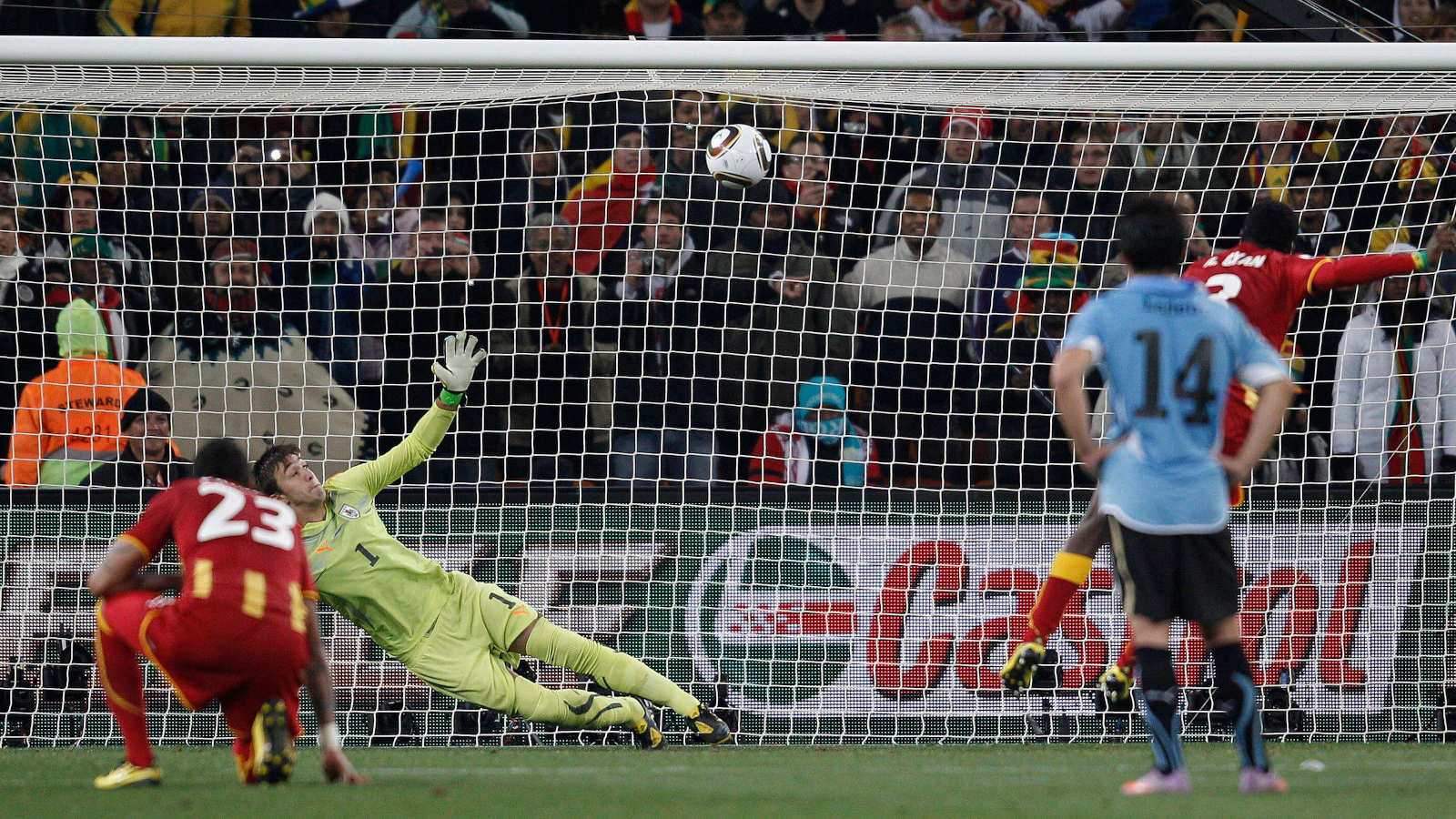 Ghana have waited 12 years to exact some sort of revenge on Uruguay over the handball and penalty miss at the 2010 World Cup. Now they have their chance.

Notions of gamesmanship and cheating can become extremely blurred in professional sport. Different people have different lines in the sand, and these were put to the ultimate test in a World Cup quarter-final at Soccer City in Johannesburg.

The preamble had been fairly straightforward. In Africa’s first World Cup finals Ghana were the last African team standing, and their match against Uruguay felt winnable. It would have been the first time that an African nation got so far as the semi-finals of the tournament.

For 119 minutes, all felt relatively normal. Sulley Muntari gave Ghana the lead in first half stoppage-time, but this was cancelled out with a goal for Uruguay ten minutes into the second half. But a storm – pretty much a perfect storm, as things turned out – was brewing. With two minutes of extra-time to play and Ghana pressurising for a winning goal, a free-kick on the right resulted in a brief game of head tennis, the ball being cleared off the line, and then Luis Suarez pushing a shot away when it was heading into the goal.

Has there ever been a higher-pressure penalty than the one Asamoah Gyan had to take that day? There were almost 85,000 people inside the stadium and millions watching at home on the television. Furthermore, all the talk before the match had been of Africa getting their first-ever World Cup semi-finalist. There wasn’t just a weight of a country’s expectation on his shoulders as he stepped up to take that kick, it was an entire continent.

He smacked his shot firmly against the middle of the crossbar and over. There was a certain inevitability about the fact that Uruguay went on to win the penalty shootout that followed soon afterwards.

Anger has been simmering in Ghana over Suarez’s involvement in that incident ever since. He was, of course, sent off for the deliberate handball and his reaction to the missed penalty only seemed to inflame matters further. Suarez already had a reputation as the gamesman’s gamesman, the player most likely to do whatever it took to get the slightest advantage. And it wasn’t just the handball. It was the reaction, the celebration and the subsequent lack of contrition for doing what he did that really smarted.

To even get sent off for this sort of offence hasn’t always been the way and deliberate handball on the goal-line by defending players used to be considerably more commonplace than it is today. In England, a change to the rules to send players off for ‘professional fouls’ and ‘serious foul play’ was first suggested in 1982 and sending players off for deliberate handball – or, more commonly, denying a goal – was subsequently codified into the laws of the game.

But we have to consider the context of this particular incident to understand it. In the 119th minute of a World Cup semi-final, there are almost no opportunities left to rescue things should the ball go into the net. Suarez took the hit of a red card and suspension for the semi-final against the Netherlands. It can hardly be said that he wasn’t punished for his actions. As for the team itself, well, Uruguay lost 3-2 to the Netherlands. Would they have won had he played? That’s infinitely debatable, but it seems unlikely that their chances weren’t diminished.

And while the reaction to his over-reaction to the penalty being missed was entirely understandable, it’s also worth bearing in mind this was the last minute of a World Cup quarter-final. In such a moment, adrenaline will be coursing through the body of everybody involved. In an ideal world, perhaps Suarez wouldn’t have reacted in the way he did to Gyan missing that penalty, but if you don’t understand why he did, then you probably don’t understand the pressures and mindset of top level professional football as well as you think you do. Nowhere in the world is the ‘heat of the moment’ more amplified than in the closing stages of a high-profile game.

Twelve years on, the opportunity to finally exact some revenge has finally presented itself and all seems set fair for Ghana. They have been involved in two of the most interesting games of the tournament so far: a 3-2 defeat to Portugal in their opening match followed by a 3-2 win against South Korea. A point will be enough for them, so long as South Korea don’t beat Portugal by two goals in the other group match.

Meanwhile, Uruguay have looked distinctly underwhelming in theirs, having taken just one point and failing to score at all. They’re bottom of their group and need a win to have any chance of getting through to the next round of the competition. On top of this, Suarez is still in the Uruguay squad, six weeks shy of his 36th birthday. He’s not the player he was but he’ll be there, and that may be what really matters to Ghanaians.

Ghana should beware. The pressure will be back on their team, while Uruguay have long revelled in their reputation as ‘spoilers’ and if there’s one lesson that we can take from the penalty incident in 2010 it should probably be that pressure can really get to players. Had Gyan converted that penalty kick, it’s highly unlikely that this incident would be making any headlines this week. For his part, Suarez has pointedly refused to apologise for his actions on that day.

None of this is intended to ascribe ‘blame’ to anybody. Sometimes what happens is just a perfect storm of circumstance, and Gyan had to walk into the middle of it. That he stepped forward to take that kick – possibly the highest-pressure penalty kick in the history of African football – says more about him than the fact that his shot was an inch or two too high.

Suarez has done far worse things throughout his controversial playing career that he managed at Soccer City in 2010, but none of this feels much like an action that wouldn’t have been taken by the overwhelming majority of professional players. And while the fact it still hurts Ghana is entirely understandable, some of the subsequent claims made about that incident – that the ‘goal’ should have been allowed to stand even though the ball didn’t cross the line – have felt a little fanciful. Such a rule change could be put into the laws of the game, but it seems vanishingly unlikely this would happen at a time when football’s direction seems to be towards complete objectivity, rather than subjectivity.

But Ghana will never have a better opportunity to lay that ghost to rest than they will with this final group match. They’ve been playing pretty well, they’ll have the majority of the crowd on their side, Uruguay have been some distance short of impressive in their previous two games, and on top of this, Suarez himself will be right there in the thick of it to witness whatever comes to pass. This has been a good tournament so far for African teams, and Ghanaian qualification would break the previous record of there being two qualifiers from the continent in the knockout stages of the competition. No pressure, lads.