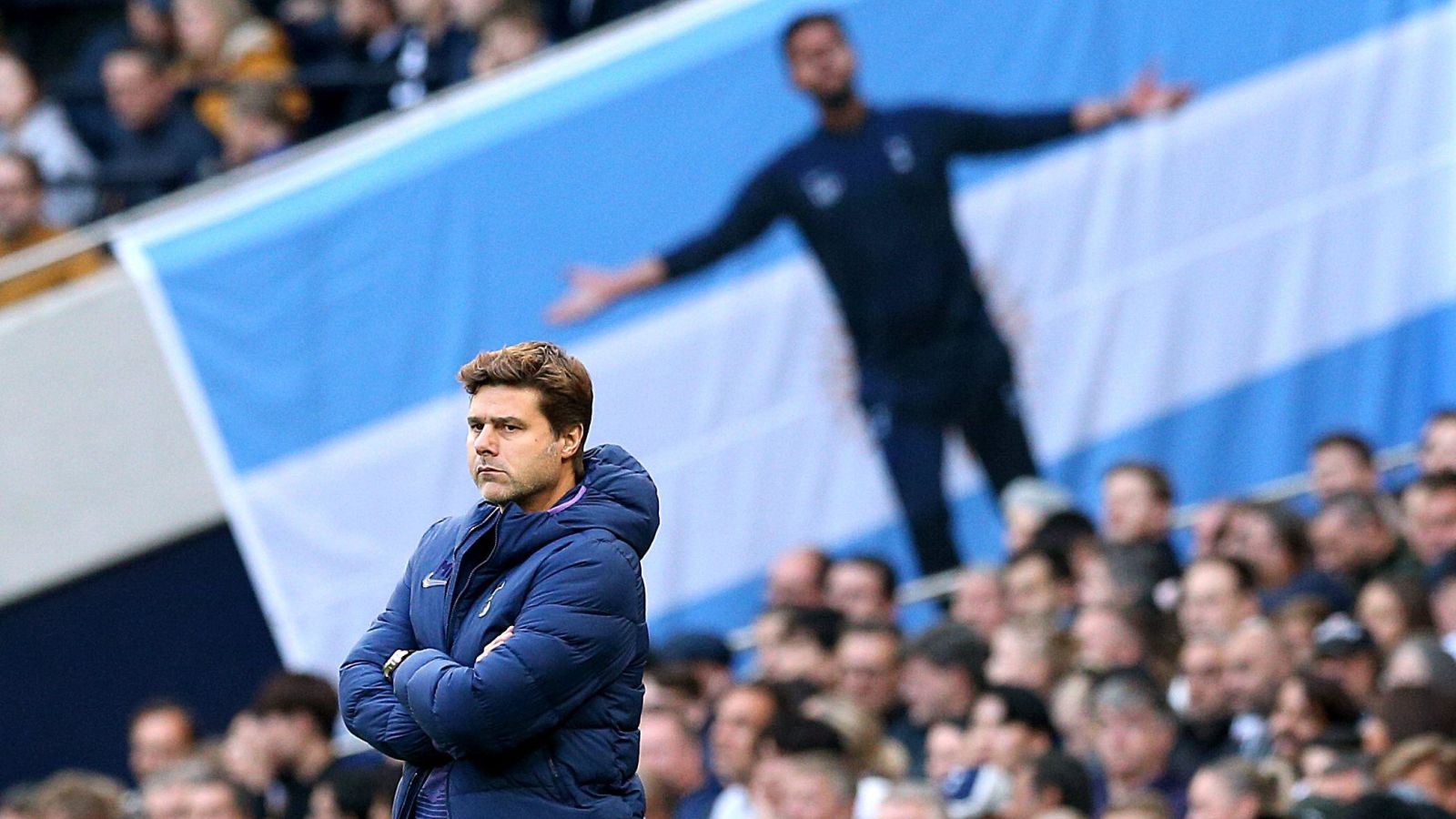 “From the day that I left the club, my dream is to be back and to try to finish the work that we didn’t finish. Maybe in five years, maybe in 10 years, and now I’m going to conspire with the universe and to throw out the idea that before I die, I want to manage Tottenham again and try if possible to win one title.”

With Antonio Conte once again making eyes at the exit door and Daniel Levy now apparently not much arsed either way, the king across the water is being touted as a possible replacement. Because of course he is. We can’t pretend we’re not delighted about the prospect.

Pochettino v Conte is a fun contest to weigh up anyway. It gets to the heart of what you want from football, what you expect from your team. We thought about it last year, just before Conte propelled Spurs to an unlikely Arsenal-mugging top-four finish, and concluded that while Conte was the better manager, he wasn’t the better Spurs manager. We doubted ourselves after the way the season finished. We probably shouldn’t have.

While that top-four finish represented a genuinely impressive achievement for Conte and Spurs, in reality nothing has really changed other than the Conte timeline becoming even more pressing and much of what follows here is unchanged from nine months ago.

Pochettino has taken only one job since his 2019 sacking at Spurs, a never entirely happy spell at PSG that went precisely as anyone would have expected and with the exact reaction in its aftermath.

Paris, predictably, brought the trophies his CV lacked. It has, just as predictably, exposed the disingenuous nature of the previous arguments against his coaching talents because he hadn’t won trophies.

Because it was never really about the trophies; it never is. It’s just using whatever stick is available to beat the target of your criticism. Had he won a Carabao or FA Cup with his magnificent Spurs side, the ‘no trophies’ argument would simply have become ‘only a Carabao’. Even winning the 2019 Champions League would simply have been memory-holed and written off as a freak occurrence. (Which wouldn’t even be entirely unfair. It really was quite freakish.)

Pochettino did precisely as well as anyone could have realistically expected at PSG, but inevitably that has seen his stock fall. Anyone could win Ligue 1 with PSG, it’s meaningless, as long as you ignore the fact that Thomas Tuchel could not pull it off a couple of years ago. And no manager has delivered the Champions League title they crave and it remains doubtful whether any manager can overcome the disadvantage that comes from trying to level up from a weaker domestic league to the teak-tough knockout stages.

His reign in Paris was as flawed as it was always likely to be. His next job after Spurs always had to be one of the superclubs, but PSG always seemed the very worst fit despite his links to the club in its former guise as just a football club. Pochettino’s ethos is all about the collective – “you sign a contract to train, not to play” – and that was never a good fit. Just like Conte is never going to be perfectly suited to Spurs. Were it not for Conte’s miserable record in the Champions League, he’d probably already have the PSG job that looks a far better fit for his talents.

Pochettino’s detractors use his time in Paris as evidence that there remains something second tier about him, that he isn’t quite up to the biggest jobs. Really all that we know for sure is that he wasn’t right for this specific big job.

The criticism is unsurprising, but what is strange is that there also now seems to be some negative retrospective reappraisal of his time at Spurs, much of it coming from Spurs fans themselves.

Nothing that has happened to either Spurs or Pochettino since his departure appears to support this view, but it’s definitely there.

So we’re asking again: would and should Spurs consider bringing Poch back?

You don’t have to think they should, but at the very least the dreary trophy-counters turned trophy-dismissers must at least acknowledge the inherent appeal of just running with the energia universal vibes and bringing Poch back, re-signing Dele Alli and re-swapping Bryan Gil for Erik Lamela. Especially when the current offering is so frequently so very drab.

Conte has enjoyed transfer-market backing beyond that of any other Spurs manager of the ENIC era. It’s not been flawlessly spent and many of Conte’s grievances about the remaining holes and gaps in a patchwork squad are valid, but Spurs were and are never going to throw Chelsea-style money at the wall to see what sticks. And a manager who won’t commit to a club beyond the summer is hardly one in a position to demand transfers, and the doubts over Conte’s future must inevitably come into the thinking of any potential new arrival anyway.

At any club, no matter how wealthy, you’re going to have to work with some players you inherit. Which of those players at Spurs has Conte actually improved? It’s none of them, isn’t it? Without the brilliant yet opportunistic snafflings of Dejan Kulusevski and Rodrigo Bentancur from Juventus, it’s wildly unlikely Conte would have delivered that top-four finish and even less likely that he would still be in north London.

Conte is not a manager for the long haul at even the biggest clubs, and certainly not at Spurs.

It hasn’t been a catastrophe, and if he were a manager Spurs could realistically expect to remain in post for five years then there wouldn’t be a major problem. Given where he found them in November 2021 they had no business being in Champions League contention so quickly. Even this year’s wobble has only seen them fall to fifth. If these were the foothills of a proper new five-year plan they would still arguably be ahead of schedule.

But with Conte, Spurs are always against the clock. His contract runs only to the end of this season and even that looks a long way off now with the much-touted 12-month extension possibility . seemingly moot. There is no escaping the sense that however things are currently going in what has been an up-and-down reign he has always had and will always have one eye on the exit door.

Spurs will always be in this curious stalled position while Conte is manager. He was never going to turn them instantly into top-level contenders again because nobody could, but what he can  achieve is caveated into oblivion by the near-certain knowledge that he won’t be around to finish what he starts. It all feels oddly directionless and increasingly pointless. He is laying expensive foundations for a palace that will never be built.

There’s no denying an element of Tobias Funke ‘but it might work for us’ to the Pochettino return. But it would at the very, very least provide an instant lift to the mood around White Hart Lane and the prospect of a manager who might still be around to finish the job in the unlikely event that things suddenly all go to plan. And even if it did go horribly wrong, as the “never go back” truism and the fact this is Spurs suggest is really quite likely, the closure that would provide – even if painful – is something both club and manager probably need to properly move on.

Spurs and Conte simply aren’t on the same page, or quite often apparently even working from the same book. It seems increasingly likely both parties will be reasonably happy to call the whole thing off come the summer.

So why wait? If Pochettino truly is as willing as he is available, then there seems vanishingly little to lose by giving him six months to assess a squad that is currently receding further and further from the Champions League picture with every game under a manager who has never really looked like he wants to be there. Starting again would be frustrating for Spurs, but whether it’s with Pochettino or anyone else it feels less wasteful than spending the next six months going through the motions of something already doomed.

Spurs have tried the ‘best’ and they still haven’t won anything while playing often miserable football. Might as well not win anything playing exciting football under a manager whose affection for the club is genuine and deep.