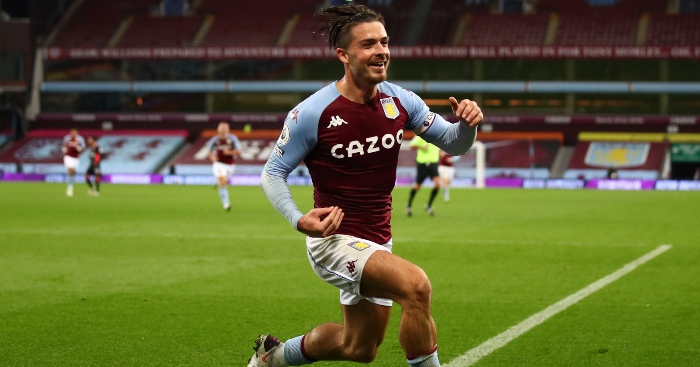 “An exceptional player, but too expensive for Manchester!”

Pep Guardiola was half-right about Jack Grealish. England’s latest great hope is indeed a one-off talent. But it’s becoming clear now that he would have been an absolute bargain for Manchester City, Manchester United or any other elite-level club in need of the swagger and drive Grealish provides.

As Winty wrote in August, even after lockdown, the 25-year-old was confined to Villa Park. The Villans were well within their rights to ask for somewhere in the region of £70million for their skipper but it was a demand deemed too unreasonable for any of Grealish’s suitors amid a global pandemic.

But it transpires that Grealish would have been a freaking steal. For United, City, Arsenal or any other club who might reasonably have cobbled together enough cash to tempt Villa into parting with their prized asset.

Those clubs and any others casting admiring glances in Grealish’s direction now he’s emerged as a key part of England’s future will surely pay the penalty for missing their big opportunity.

Most rueful should be Ole Gunnar Solskjaer. The Manchester United manager spoke in the spring of a chance to ‘exploit’ the transfer market with the Red Devils’ riches but he had to beat a hasty retreat when it became clear that Britain’s richest club were as reluctant as everyone else to part with their cash. United had a golden opportunity to close the gap on their rivals but instead endured a transfer window as shambolic as many of Ed Woodward’s previous recruitment failures.

Perhaps United were banking on Villa being relegated to secure a hefty discount. Or they might counter with the Paul Pogba problem as mitigation.

In a Covid-free world, it is almost certain that Pogba would have kicked up a stink pungent enough for United to banish him to Spain or Italy. Maybe the plan was to reinvest what money they received for Pogba in Grealish. Playing off the left side as a creative midfielder, there seems little question that Grealish would have been a huge upgrade.

That was true then and Grealish has reinforced the point this season with five goals and six assists in eight games. Not one of the numerous systems Solskjaer has tried in this campaign would have hampered Grealish and there is no doubt that the England star could dovetail with Bruno Fernandes in a way that Pogba simply will not.

The way that Grealish, similar to Fernandes, grabs games by the scruff of the neck and dominates with bravery and imagination on the ball while taking the knocks as opponents grow evermore exasperated with his refusal to give it back, the Villa skipper looks every inch the type of player Sir Alex Ferguson would have made an exception for.

“If a really top-class player became available, then we would go for him,” said Ferguson while otherwise refusing to recruit in 2011, referring to his knack of seizing opportunities when they present themselves. Solskjaer – who loves few things more than channelling his former boss – should have remembered that when Grealish was available in the summer.

One of Ferguson’s greatest regrets was missing out on Paul Gascoigne and the comparison with Grealish has been made numerous times now. This weekend, it came from ex-Spurs skipper Graham Roberts.

I have had pleasure of watching England’s greatest midfielder in the last 25 years many times in Gazza for Spurs and Rangers and honestly I think Jack Grealish is the closest I have seen to him in style.

Former Arsenal captain Gilberto likened Grealish to Dennis Bergkamp last week, perhaps more in terms of impact than style. “Grealish, amazing. It seems he could be a player that Arsenal missed… he could be somebody for the future at Arsenal.”

Indeed, he could have been. The Gunners spent Grealish-type money on Nicolas Pepe a year ago and this summer, even while laying off staff, they were willing to spend on Thomas Partey. A similar investment in Grealish would have solved numerous problems for Mikel Arteta, mainly around the creative void in his midfield, but it would also have enabled the Gunners boss to shift Pierre-Emerick Aubameyang off the left flank and into the centre, where he would gobble up whatever Grealish could serve him.

If he was possibly too expensive for Arsenal last summer, Grealish almost certainly is now. Should he continue in his current vein of form – why wouldn’t he now Villa have teamed him up with better players? – what price-tag might Villa slap on their captain next year? They could argue that he is worth at least the same amount as Jadon Sancho, who would have cost £108million in a pandemic. With Grealish safely under contract and unlikely to rock the boat to force an exit, Villa could add another £40million or more to their previous valuation.

City could pay whatever Villa are asking, but so too could they last summer. Guardiola has spent a mega-f*ck-tonne of money as City boss but never yet has he spent an extraordinary figure on one star – four clubs have spent more on individual players, with United, Chelsea and Liverpool doing so more than once.

City would have had to shatter their benchmark by at least £10million to get Grealish in 2020 but next year that difference will rise by perhaps another £30million. All the talk is of City going big next summer, with Lionel Messi and a top-class striker on their radar too. If Guardiola wants Grealish, then last summer was the optimum time to be brave.

There is little hindsight in play here. Grealish is hogging the limelight simply by continuing his form from last season, when he almost single-handedly kept his boyhood side in the Premier League. Given how he is relishing playing in a better Villa side, Holte Enders might suggest that there is no need for Grealish to go anywhere.

If he chooses to see out his career at Villa Park, Grealish should not be chastised for his loyalty. But the playmaker was open to moving in the summer prior to signing new terms and the same will probably be true next year.

By then, though, his price may have doubled. His suitors should already be kicking themselves.