Home Everton Farewell then James, an inevitable but glorious flop 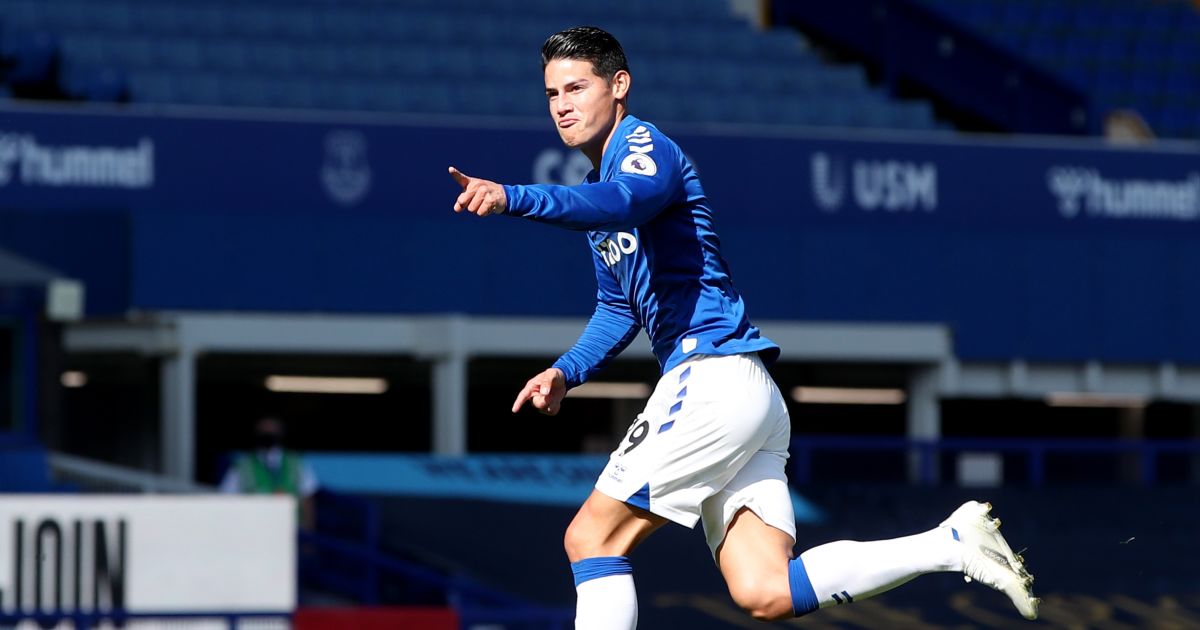 James’ star shone only briefly for Everton, but for a short while there it was glorious.

We all knew it would end like this, and maybe that’s the point.

James Rodriguez’s absurd, inexplicable and yet briefly glorious Everton career is over, barely a year after it had begun, with the club desperately packing him off to Qatar for a knockdown fee just to get his £220,000-a-week wage off the payroll.

Truthfully, could it have gone any other way? The answer is surely no, and that’s just one of the reasons why Everton signing James might be our favourite Premier League transfer ever.

It has ended pretty badly and pretty quickly. Any cold and sober assessment of Everton’s highest-paid player ever has to conclude that 23 Premier League games, six goals and a Twitch stream in which he cheerfully admitted to not knowing who the club still paying him the thick end of a million pounds a month were playing that weekend (“Oh, Leeds? A difficult game. Let’s see what happens. Hopefully they will win.”) constitutes a flop.

But you can prove anything with facts.

Because every now and then, James was still extraordinary and remained even it has most distant and aloof an eminently watchable footballer. That first, and ultimately only, season was a long way from a total write-off and while there was no way back once Carlo Ancelotti hotfooted it back to Madrid to be replaced by the very capable yet very sensible Rafa Benitez with his ideas like ‘running’ and ‘tactics’ and ‘knowing who we’re playing this weekend’.

Out went James, in came your Andros Townsends, your Demarai Grays, your Solomon Rondons. Everton will be a very different side now. They will ultimately probably be a better one.

Yet they will be less fun, and there are plenty of reasons why the signing of James was the right thing to do despite the expense and despite the near inevitability of it all ending precisely the way it did.

What Ancelotti did in general, and specifically with James, was allow Everton fans to dare to dream. In those heady yet ephemeral days of autumn 2021 when the Colombian was casually tearing Premier League defences to shreds at little more than walking pace and Dominic Calvert-Lewin seemed to score twice every game and Everton were top of the league, all things seemed possible.

In the strangest of all Premier League seasons the idea of an excellent manager with a genius playmaker and confident striker launching an unlikely title tilt didn’t seem that unlikely. I mean come on, there were even moments when we thought Jose Mourinho might still have it in him. It was a different time. If you weren’t there, you just don’t understand.

Most of James’ best moments for Everton arrived in that giddy early part of the season. After the shock of his signing came the sheer electric thrill of the opening game of the season, when Mourinho’s timid and terrified Spurs side were given the absolute runaround. James didn’t get on the scoresheet but he did everything but before Calvert-Lewin got his real breakthrough season up and away.

Maybe for those of us who deeply enjoyed the whole concept of James at Everton and seek to justify its inevitable ultimate failure can use Calvert-Lewin as the cornerstone of a justification that offers something more tangible than a handful of goals and flashes of genius. Maybe Calvert-Lewin breaks through as he did without James elevating Everton’s whole outlook and ambition and mood. But maybe he doesn’t. Football is a capricious and tricky thing. Talent is only one part of it. Calvert-Lewin clearly has that, but the opportunity he got – and so thoroughly grasped at the start of last season isn’t one afforded to many young players outside the gilded elite.

We know we’re reaching here. We’re desperate. But there were other occasions. The thrashing of West Brom. The two goals against Brighton. Perhaps most significantly of all that assist for Richarlison to finally help Everton end their Anfield hoodoo.

They were fleeting moments, but for a certifiable flop they are moments that mattered. James left his mark on the Premier League and for those few short months when he was happy and fit and focused and knew who Everton were playing next, he made English football a better and more fun place.

He will be remembered as a cautionary tale. A reckless low-percentage signing from a slightly desperate club trying to fast-track itself back into the long-lost big time by sheer force of will.

That it ended badly came as a surprise to precisely no-one. But let’s not pretend there weren’t some happy and magnificent moments along the way. He got fans out of their seats (albeit mostly seats at home) and put smiles on their faces. For a little while anyway. That has to be worth something. Probably not £220,000 a week. But something.