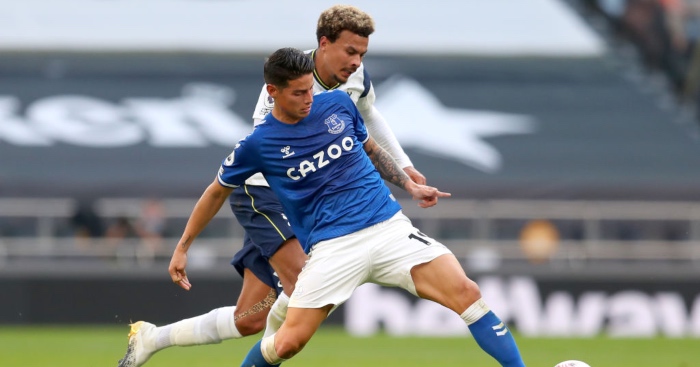 Last summer, while still in charge of Napoli, Carlo Ancelotti admitted he was “very attached” to James Rodriguez, amid speculation the Serie A side would make a move for the Colombian. It never materialised, and the Italian would have to wait for his next club, Everton, who have granted his wish to to be reunited with James: a lost soul who was missing his mate.

“He’s really excited about the project of the club and the fact we want to improve,” Ancelotti said after James was announced as an Everton player. “He was really excited to sign and I didn’t spend time to convince him – he was already convinced.”

It’s not a surprise. James has played his best football under Ancelotti for Real Madrid and then Bayern Munich: familiarity offered the playmaker the best chance to revive a career that was fading through nothing but a lack of game time. The quality is still very apparent.

A little over two months ago, Spurs laboured to a 1-0 win over Everton. It was a terrible game, with Tottenham’s perpetual counter-attack eventually winning out. But what was most striking was the inability of either midfield to take charge. A lack of control, ideas and technical proficiency made for a very difficult watch.

James – along with fellow new signings, Abdoulaye Doucoure and Allan – have completely changed the way in which Everton approach a game of football. While Tottenham’s acquisitions – Matt Doherty and Pierre-Emile Hojbjerg – offer an improvement, but no alteration in the game plan.

Before, whether through Ancelotti’s direction or an on-field lack of trust, defenders bypassed the likes of Tom Davies and Gylfi Sigurdsson; it was impossible for them to get a foothold in the game or to build any significant pressure.

Now, there’s a pattern to their play, an obvious method: Allan provides solidity; Doucoure further grit and a forward thrust; James the vision, creativity and execution. In their first start together, they were all sublime.

It may have been a set play that won the game in the end: a stunning outswinging delivery from Lucas Digne and a towering bullet header from Dominic Calvert-Lewin. But the battle was really won in midfield, with James the conductor.

He was a cut above in possession. His influence on the game was summed up by one stage of play early in the second half. Tucked in off the right side, he casually killed a fired ball from defence dead with his first touch before laying it off simply to a teammate. A pre-emptive glance over his shoulder meant he could take the return pass and immediately drift a cross field 30-yard ball straight on to Richarlison’s head.

The striker fluffed his lines but it was that switch of play in particular that was a constant thorn in Tottenham’s side. James was always looking for the Brazilian, and didn’t miss.

Spurs did make it easy for him. It wasn’t that they were necessarily being “too nice”, but inefficient and lethargic. James has a wonderful first touch, but it was rarely tested through pressure from Harry Winks or Hojbjerg. Dele Alli – rightly hauled off at half-time – was non-existent.

The problem is, those midfielders – whoever they are – are always chasing their tails. Goals don’t come from possession for Spurs, they come from a se- piece or a counter-attack. There’s very little midfield respite unless they win corners or free-kicks high up the pitch. It looks incredibly wearing.

They don’t have a James, who can keep the ball in that hole between attack and defence; to monopolise possession and create chances. A forward pass either seems to bounce off Lucas Moura or is played in behind for Son Heung-min, who far more frequently has his arms up in the air in frustration than the ball at his feet.

Alli is also not that player: he’s not a striker; he’s not a No.10. He plays a position that doesn’t exist and it’s been a problem for Spurs for a while. When he’s contributing – scoring goals and assisting – the juice is worth the squeeze. As soon as he’s not, he’s a luxurious liability; one no team – let alone Spurs – can afford or should put up with.

Giovani Lo Celso was sorely missed. But even he doesn’t offer quite the same skill set as James or Christian Eriksen, who used to stroke passes around from exactly the same position.

The good faith built through an off-season glimpse inside the mind of Jose Mourinho has already, predictably evaporated. The Spurs fans face a very long, tiring season unless they dip into the transfer market to fix their obvious flaws.

But the Everton faithful have every right to be thrilled by the prospect of a team they can finally be proud of with a midfield star who could be set to reaffirm his world -status.