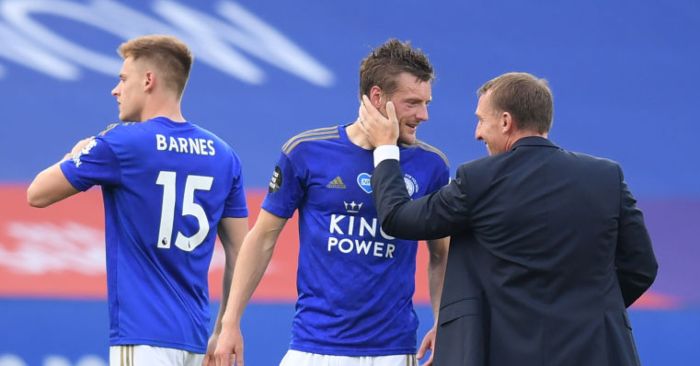 There is something engrossing about watching an elite finisher play the sort of passes they themselves would thrive on. That inversion of roles carries with it a perverse charm, like a prolific actor making their directorial debut, or a superhero helping their long-suffering sidekick save the day instead.

You can’t help but watch. It challenges perceptions and self-imposed boundaries. The very principles of typecasting can be shattered in 90 minutes.

Jamie Vardy is a striker. Not a centre-forward, in the mould of Roberto Firmino or Dennis Bergkamp, but a striker. A ruthless, cold-blooded, single-minded goalscorer. A destroyer, not a creator.

Picture him. What do you see? A tireless run off the shoulder of the hapless last defender to latch onto a long ball over the top, followed by a low, driven finish and a celebration in front of the opposition fans who have dedicated the entire game abusing him from the stands. It is simple but effective; predictable yet unpreventable.

It does not even have to be a vivid memory of a particular goal. His most renowned of 103 in the Premier League came against Liverpool in February 2016 and offered a slight variation on the tried and tested method. Vardy was still galloping behind Mamadou Sakho, chasing Riyad Mahrez’s 50-yard ball into a wide-open space on the right. But it was the finish that was so striking: a sensational dipping effort that clashed with the net but also our collective idea of what Vardy is capable of.

Yet his most instructive, iconic goal came in April 2018. Mahrez, again, spotted the run and obliged with a pinpoint pass from behind the halfway line to the edge of the penalty area. Vardy accelerated beyond Craig Dawson and, before the ball could even bounce, struck a perfect volley past Ben Foster without even looking at the net, sprinting at full speed and with his weaker foot.

It required absolutely sublime technique, control and timing, and perhaps aware that he had strayed too far from the safety of his own script, Vardy proceeded to congregate at his favourite corner of The Hawthorns to honour the moment with his favourite West Brom supporters.

He has always been a more complete footballer than he is given credit for, but old foes Sheffield United, and maybe even the unabashed praise of Chris Wilder, brought perhaps his finest, most rounded top-flight performance of all.

It started as most would expect, Vardy hitting the post when played through by Youri Tielemans. But from there, finisher became facilitator. One raking Ryan Bennett pass was turned into a wonderful assist for Harvey Barnes, who could not beat Dean Henderson. Minutes later, Wilfred Ndidi slid Vardy in behind again but he waited, occupied the thoughts of both John Egan and Jack O’Connell and created space and time for Barnes once more.

Vardy simply doubled down: leading a counter-attack from which Ayoze Perez ought to have added to his opener; opting to ignore the offside Barnes before playing a wonderful ball for Tielemans to waste the opportunity instead; then collecting a fine Jonny Evans pass to square for Demarai Gray’s goal. The variation in his delivery was breathtakingly effective. The right decision was made every time.

Between the 51st minute and the 79th, Vardy hit the post and created five chances – including the goal that secured Leicester three crucial points – with six passes. In one fell swoop, he proved himself greater than just a goalscorer.

That is, of course, a misnomer in itself. The 33-year-old does not just score: he stretches defences, creates confusion and panic and opens up space. He is typically there for goals but does so much more.

But he reached a different plane on Thursday. This was irrefutable proof, a prime example of Vardy allowing Danny Ings to close the Golden Boot gap while still making the most telling contribution of the midweek, just when Leicester needed him. It was Harry Kane in Spain – just with an imperious Batman flanked not by Raheem Sterling or Marcus Rashford, but a clumsy Barnes.