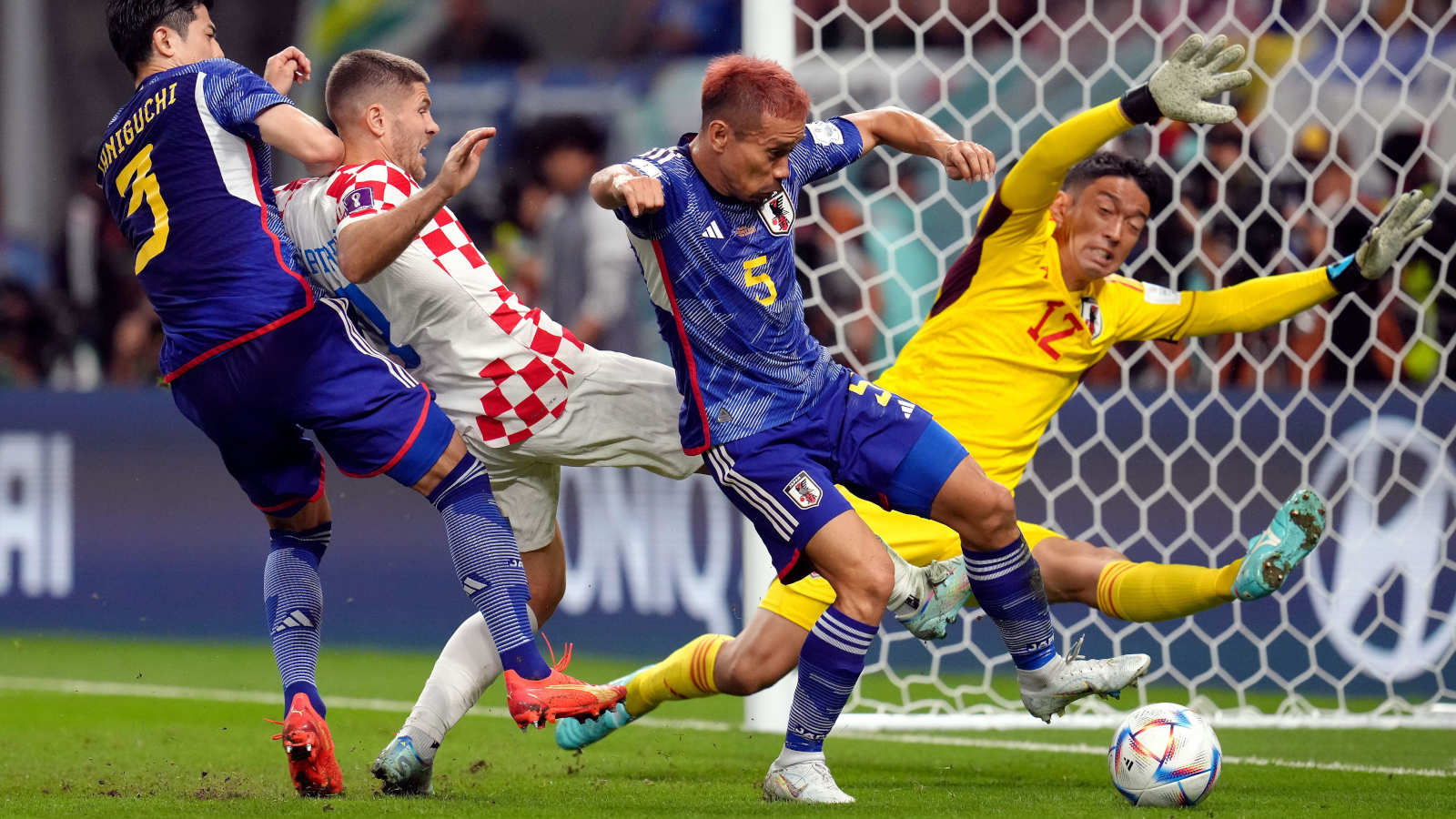 Japan had already shocked Germany and Spain in their group, but Croatia’s experience and some bad penalties were enough to prolong their second-round agony.

On October 28 1993, they took to the pitch for the final round of matches at the top of a six-team mini-tournament to decide Asia’s qualifiers for the World Cup finals in Doha, knowing that a win against Iraq would take them to to the USA the following summer for what would have been their first World Cup finals qualification.

With Saudi Arabia and South Korea just below them in the table, they led 2-1 going into stoppage-time before a goal from the Iraqi subsitute Jaffar Omran coupled with results elsewhere put them out of the competition while Saudi Arabia and South Korea, their biggest rivals, qualified in their place. This match has become known in Japanese footballing circles as ‘The Agony of Doha’.

Japan have qualified for every World Cup since then but they’ve never got past the first knockout stage of the competition. Four times now they’ve got that far – once as hosts – but every time they’ve fallen at that hurdle.

In 2002, they lost as hosts to Turkey. In 2010 they were beaten on penalties by Paraguay, and in 2018 they were two goals up against Belgium with just over 20 minutes to play before folding and losing 3-2.

And in the end they couldn’t overcome Croatia, either. It took the first penalty shootout of the tournament to separate these two teams, with Takumi Minamino, Kaoru Mitoma and Maya Yoshida all having their penalty kicks saved by the Croatian goalkeeper Dominik Livakovic, as Croatia, beaten finalists last time around, progressed at the end of two hours of football during which they’d offered little indication of why they really deserved a place in the quarter-finals of the World Cup.

Tenacious and experienced they may well be, but that was about the best that could be said for them by the end of this match.

Sometimes we get so caught up in the moment of a surprise result that we don’t take the time to consider where that surprise came from in the first place. For Japan to beat Germany was one thing, for them to go on and beat Spain was something else altogether, and those wins didn’t come from nowhere. They came from a team who played without fear, and with a degree of flexibility that could turn a weighted blanket of a defence into a sudden, waspish attack.

These were no conventional ‘upset’ results, either. Japan arrived with a plan, and a large part of that plan involved them being comfortable out of possession, while preferring to be pragmatic and economical when they did have it.

Both Germany and Spain seemed to fall into a trap brought about by under-estimating them and paid a price for doing so. In Germany’s case, it was the ultimate price. Japan, for their part, sealed qualification against Spain after a fairly horrendous result of their own, a 1-0 defeat against a weak Costa Rica.

While Croatia made the final of the competition in 2018, they hadn’t exactly set the group stages alight this time around, scoring all four of their goals in their game against arguably the weakest team in the tournament.

This was sandwiched between goalless draws against Morocco, who were by some distance the most impressive team in that group, and a rapidly-imploding Belgium.

If anything, it was something of a surprise that it took Japan until two minutes from half-time to take the lead. They created chances, forced the game to move to their tempo, broke more effectively, and played with an energy that seemed beyond a Croatia team for whom this felt like a game too far from a very early point in the game.

But then, the energy and intensity that Japan brought to their performances also made Germany and Spain look a little like that, too.

When the goal did finally come, it was from an inventive set piece to which Croatia were simply too slow to react. Ritsui Doan, Hidemasa Morita and Maya Yoshida combined to set up Daizen Maeda to head in from close range. This creativity was in stark contrast to a lumpen Croatia performance with attacks that just seemed to run out of steam before they could create a clear opportunity. The first half was light on clear-cut chances, but it was clear by the interval that Japan deserved their lead.

Four years earlier, en route to the World Cup final in Russia, Croatia conceded first in each of their knockout games, only eventually coming unstuck in the final against France. They even fell behind first against Canada in the only one of their three group matches to feature any goals whatsoever.

And ten minutes into the second half they did it again with a goal out of thin air, a header from Ivan Perisic that came with so little warning that it felt like having a bucket of cold water thrown in your face.

But the rest of the 90 minutes rather slid away from two teams who looked increasingly equally matched but playing different types of football. Perisic, a tournament special if nothing else, flashed a shot narrowly wide, but otherwise chances were few and far between as the game trundled inexorably towards extra-time.

One of the stranger feelings of this World Cup has been the veneer of plasticity that has coated it since its beginning, with very few red cards, practically no own goals and, in half of the round of 16 games, none even extending as far as extra-time.

If anything, the last 20 minutes of normal time felt a little too sanitised, but they were an improvement on extra-time, during which neither team really seemed to want to take the chance that might break the deadlock. It’s an understandable reaction. Why take a chance when you’ve worked so hard to get to this point in the first place? But it doesn’t make for a particularly edifying spectacle.

It wasn’t difficult for the mind to start wandering towards the question of why they actually still bother with extra-time in the first place.

When Croatia attacked, they seemed limited to slinging diagonal balls into the penalty area which were comfortably claimed by the Japanese goalkeeper Shuichi Gonda without too much issue. Japan remained happy to sit back and absorb, to allow Croatia to chase around the middle of the pitch without too much consequence. Japan continued to look more dangerous when they did attack, but those breaks became increasingly rare as the extra 30 minutes wore on.

It’s a strange way to finish a football match between two teams that have tied over 90 minutes, to make them play an extra 30 minutes of the same, only a bit more tired. And ‘tired’ was the theme of the shootout too, with three poor attempts from Japan – they did at least manage to convert one – comfortably saved and Croatia converting three of their four.

Livakovic equalled a record already jointly held by saving three penalty kicks, the same as his compatriot Danijel Subasic against Denmark in 2018 and Ricardo of Portugal against England in 2006.

Of course, the benefit of hindsight affords us the ability to ask why Japan didn’t press harder in extra-time. It’s a question that will likely be commonplace as the team’s fourth failure to reach the quarter-finals of the World Cup falls under the microscope.

In the end, Croatia had the experience and the nous, just enough to edge through by the narrowest of margins. Japan, meanwhile, now return home following a couple of excellent performances, their tournament ended in the first knockout stage for the fourth time.

The agony of Doha didn’t quite replicate itself this time around, but their agony of the knockout stages of the World Cup remains unresolved for now.