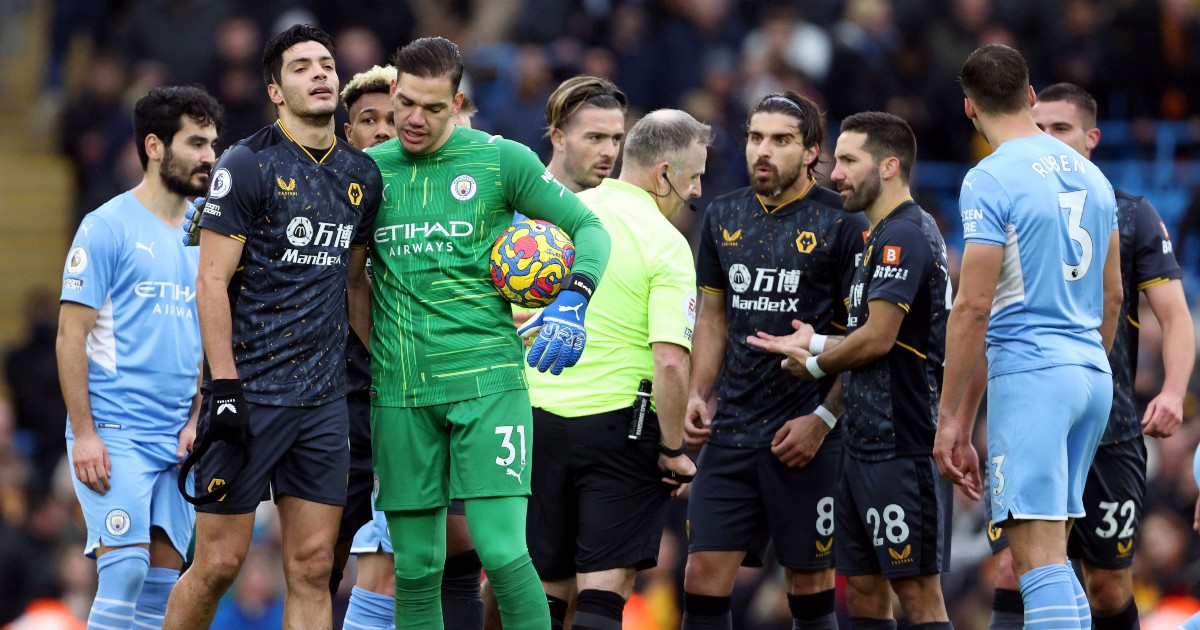 It takes a special refereeing performance to anger both teams but Jon Moss managed it in a fractious game between Manchester City and Wolves.

The only thing Manchester City and Wolves might be able to agree on is that their at times tempestuous, often truculent and regularly tiresome Saturday lunchtime meeting was decided in entirely appropriate fashion. It was, for long periods, the absolute pits – just too literally in the case of Joao Moutinho.

It takes a particular kind of refereeing performance to have both sets of supporters pitching you as the villain. A specific balance is required to convince home fans of the established elite that you are favouring the underdog, while simultaneously persuading the visiting team that the bigger sides get all the decisions made in their favour. Jon Moss even issued a red card that neither party could really disagree with, yet still ended the afternoon as both an obstacle to Manchester City’s inevitable victory, and the culprit for another hard-fought Wolves defeat.

The penalty was a nonsense. Bernardo Silva’s delivery connected with Moutinho’s armpit and bobbled out for a corner. Moss and his officiating team were justified in initially awarding the penalty but it is a mystery how that could be upheld on countless VAR viewings.

To be fair, Joao Moutinho should probably have considered not having arms there.

With that said, Manchester City probably still win this game with or without Raheem Sterling converting his 100th Premier League goal from 12 yards. Jack Grealish missed a monstrous chance soon after, Jose Sa saved well from Gabriel Jesus, Max Kilman blocked brilliantly from Phil Foden and the pressure only built after the opener.

It was a repeat of the Wolves game a week prior, down to the scoreline and even Conor Coady’s wonderful covering from a goal-bound shot. Kilman almost snatched an equaliser after the impeccable Rayan Ait-Nouri broke in stoppage-time and lifted a cross into Ederson’s previously untouched penalty area, but it would have been daylight robbery with 52,613 witnesses.

That sense of Wolves injustice will linger regardless. Ait-Nouri was fantastic in a great 90-minute duel against Sterling. Romain Saiss and Kilman were utterly repellent in the best possible way, marshalled phenomenally by Coady. For the first half, Adama Traore was the game’s best player, holding the ball up so well to relieve pressure and drawing four fouls, two of which resulted in bookings for Ruben Dias and Rodri.

Approaching half-time, that gave Wolves a platform to build from. With a centre-half and holding midfielder on yellow cards and Traore in his typically destructive mood against this opponent, they were growing in confidence at a time when Manchester City‘s frustration was starting to show. The home fans booed and jeered every 50/50 decision going against their team, passes were strangely loose and space was nowhere to be found.

Then came the real swing. Moss absolutely shouldn’t and likely will face undue and disproportionate criticism but this result can be traced back to the infuriating stupidity of Raul Jimenez. As soft as his first booking for a halfway-line foul on Rodri may have been, his immediate second for blocking the subsequent free-kick was foolish, naive and cost his team dearly. It turned mission improbable into mission impossible.

Jurgen Klopp noted that Wolves “changed their approach” against Liverpool last week, and that “they normally are a footballing side, we didn’t see much of that”. It is a post-match accusation he and Pep Guardiola are fond of – and they reserve particular praise for opponents who play progressive football while getting battered by their teams – but they are always speaking from a different reality. Wolves played to their perceived strengths and for 45 minutes, that plan absolutely worked.

The culpability of Jimenez and the officials changed that and to Manchester City’s credit, they took full and dull advantage. When none of the three contenders can afford to lose ground in the title race, matching Liverpool’s win last week in terms of result, scoreline and the difficulty in achieving both is a fine achievement.