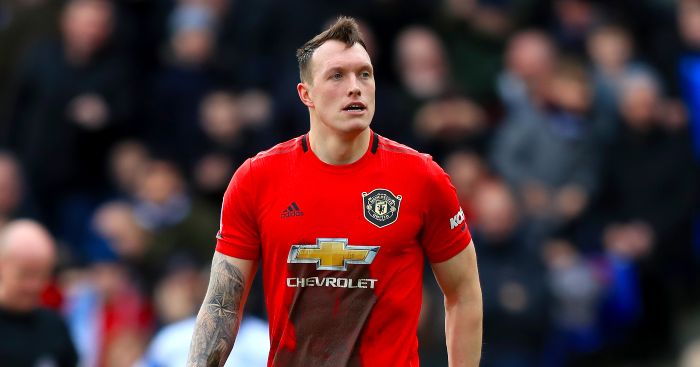 It started with the faces.

He makes these unfortunate grimaces when he exerts himself, like the look of someone who’s endured a thousand cuts to the stomach and then had citrus poured into the open wounds.

Soon these spectacular expressions became an online trend and formed a comical characterisation of the player as a whole, like it was his single defining trait.

The imagery soon turned to montages, highlights of moments of his failure: an own goal, a poor pass, some more faces, all topped off and made the more whimsical by dubbed Titanic music or something equally silly.

A search of his name on YouTube and you will be inundated with thumbnails of his grimacing face alongside ironic ‘best moments’ highlights: “He’s the best talent I’ve ever come across”, read the text in one video, jokingly attributed to Lionel Messi.

One supposed well-known online animator curated an entire cartoon music video of Jones, having the defender sing his own rendition of Christina Aguilera’s Beautiful in a voice mimicking some sort of defect. It highlights his supposed ugliness by having even the undead run away upon seeing him, and ends with Jones sticking a plastic bag over his head, accepting of the fact he shouldn’t face the world.

Even such humour comes from Jones’ gutsy performances, when he’s displaying the commitment most fans demand of their players, lurching himself to the floor, using any limb possible to prevent a chance.

When John Terry pulled off a diving headbutt and missed the ball in the 2010 World Cup game against Slovenia, many were quick to proclaim him as some sort of Rule Britannia hero, a lion with the blood of the nation coursing through his veins. Yet when Jones did precisely the same thing and even succeeded in stopping Olivier Giroud from scoring, it was widely mocked, another GIFable gem, retweeted and accompanied with laughing emojis. He’s gone and proper Jonesed that one.

Being the figure of fun has also meant he’s often blamed for Man United’s downfall; he’s even embodied it entirely for some. The clip showing his ineptitude in failing to tackle Lionel Messi in a 2019 Champions League quarter-final. When he again plunged to the floor using his face as a shield against Sheffield United that same year. His aghast pose when he missed his penalty against Derby County in 2018. The time he put his face into one of the padded struts behind the goal against to Spurs in 2018 as a signifier of his team’s collapse. He has been the image that has encapsulated their most abject displays, a personification of their decline, his entire frame and look mythologised more than Roland Barthes’ Black Solider.

This isn’t to point blame. Everyone’s got in on the fun: our friends at Planet Football have done it, even The Guardian wrote a whole piece on the absurdity of him taking corners at one point – if it was any other defender, would it have been noteworthy? – with the latter, penned in 2015, even bizarrely adding in the copy his lack of goals in the Premier League for Man United at the time: (two from 116 appearances).

But we are left to ask just how much of this commentary has been to the detriment of Jones’ career. Undeniably his potential was unlike any other of his generation (which might sound absurd now). He was subject to a bidding war between Liverpool and Man United when he was at Blackburn, such was his prowess in the for two Premier League seasons. And in his early days at Old Trafford came that quote you’ve no doubt seen or heard from Sir Alex Ferguson: that Jones could be Man United’s “best ever player”. Even Bobby Charlton likened him to Duncan Edwards, while England manager Fabio Capello said Jones reminded him of Franco Baresi.

Now reports suggest he’ll be either heading to Burnley or the Championship. But how was it possible he arrived at such a juncture?

The obvious answer is the injuries. Of the ten seasons he’s been at Man United, he’s only played more than 20 league games in four. He has never managed 30 appearances or more. He’s actually amassed quite a record of reasons for his absences: he’s had the same hamstring injury four times; had knee and ankle injuries four times; a toe injury; his shinbone once kept him out; he had a blood clot; his back once went; his shoulder, too; and also he endured a concussion so severe he spent almost three weeks out of action.

In fact, he’s been injured 19 times at Man United, working out at almost twice per season, each one for an average of 34 days. In total, he’s spent a collective 505 days of his career unable to train or play.

He has been incredibly unlucky, any and all momentum ruined before long. But there is no denying he – or whatever he could be – is not what Man United need right now. There is a clear desire from some supporters for him to ‘do the right thing’ and move on with his reported £100,000-per-week wage. It’s understandable, but it would be a matter of him taking a £3million wage cut if he did move, and you get the feeling such a grand gesture of goodwill would be largely forgotten; there would be no abundance of thank you messages in the mail for Jones for doing such a noble act in departing.

As he once said about a small revival in form at 23: “People can assume and predict and it is up to us to prove them all wrong. People criticising does spur you on. You are always going to get critics.”

Five years later, the player reportedly rejected the offer of a testimonial in his latest contract, saying: “Apart from my mum and dad, who else would turn up?”. The report continued, saying that Jones ‘tends to turn the joke on himself’ quite often, presumably as a defence mechanism.

Indeed, such quotes speak hugely about where his head is at now. Even at 28, in what should be the pinnacle of his career, Jones is on a downward spiral. And while the snide remarks here and there, the poking fun – mostly in good faith – are not to blame for his plight, it certainly hasn’t helped.

It’s a shame that a surely great talent has wasted away. There was such promise, a huge scope for great things, but barring some miracle, it’s come to a grinding halt prematurely. The curtains have abruptly gone down and the lights shut off when intermission was only ten minutes ago.