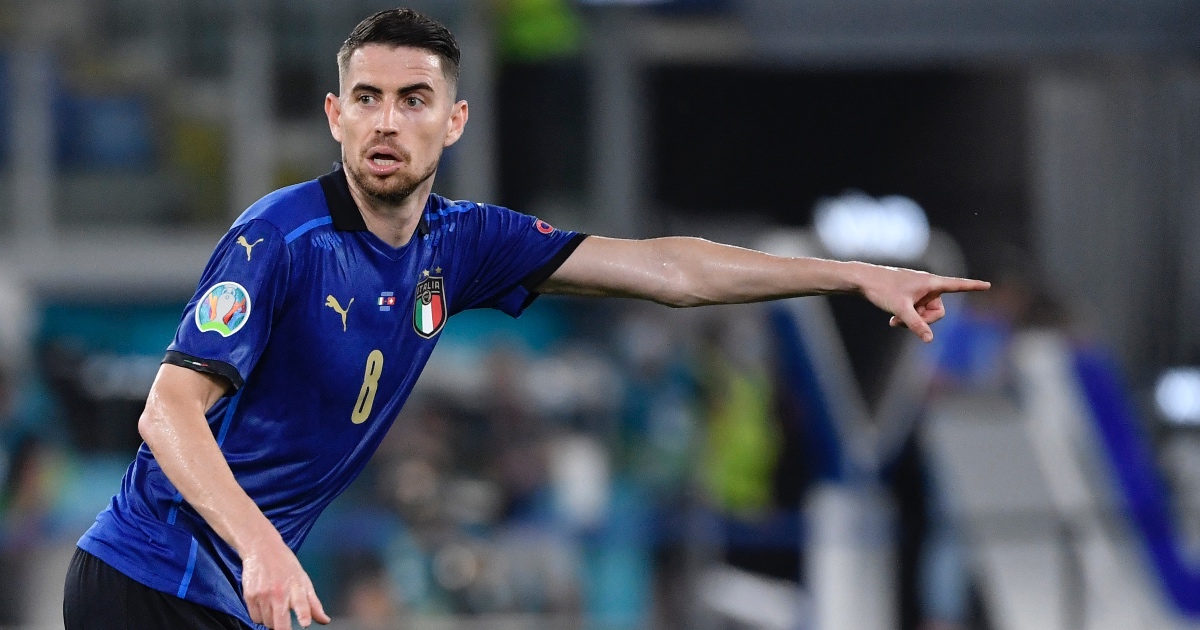 Jorginho has been at the heart of dramatic change for the better for both club and country. So what’s so funny?

“Honestly, I don’t think about the Ballon d’Or,” Jorginho said, speaking for us all.

Surely not. Jorginho is the slow, error-prone partner of the Chelsea midfielder actually deserving of the top individual gong. This was supposed to be N’Golo Kante’s tournament at the end of N’Golo Kante’s year, ending in a ‘Moonlight’ moment.

But that narrative need only be tweaked slightly to work in Jorginho’s favour; and ‘La La Land’ was pretty good too. Like Kante, Jorginho was a stalwart in Chelsea’s Champions League-winning campaign, he is the key – perhaps even more so than Kante was – to his nation’s chances of winning Euro 2020, and lest we forget, he was also top goalscorer for a club that finished fourth in the Premier League.

Had you not watched Euro 2020, the idea of Jorginho winning the Ballon d’Or would likely arouse a chuckle or two. Despite his vital role in Chelsea winning the Champions League, in which no player made more than his 46 tackles and interceptions combined, his performances provoked begrudging acceptance for the most part, rather than genuine affection or praise. He was the A.N.Other alongside Kante; for every Chelsea fan coveting Jorginho’s role in the team, there was another pushing for Mateo Kovacic to start ahead of him.

We all know his problem. It could have been more costly than it became against Belgium in the quarter-final and the Premier League often accentuates his relative dearth of pace: if he’s slightly out of position, he and the team are in trouble. But both Thomas Tuchel and Roberto Mancini accept this flaw, knowing that his value to the team is well worth a constraint that rarely causes an issue. They know best.

We are at risk of hindsight bias here and we’re not saying that Jorginho has been perfect since he arrived at Chelsea; criticism of him has very often been deserved. But just as it’s not fair to re-write his history at Stamford Bridge, it’s also not fair for him to be prejudiced now by that history, given his outstanding performances this year.

Jorginho’s managers before Tuchel at Chelsea have cast him in a bad light. There was great apathy towards him for being the on-pitch embodiment of Maurizio Sarri’s perceived failure and it was difficult to be Frank Lampard’s “driver” when the brake lines were severed from the start. If Jorginho had arrived with Tuchel in January, the perception of him from the Premier League naysayers would be entirely different. And his chances of winning the Ballon d’Or – judged on the calendar year, not the season as a whole – would not be dismissed so readily.

He’s been superb for Italy. Mancini describes him as the man who “makes us tick”: the man to maintain what is an extraordinarily high tempo. His reading of the game and ability to keep the ball and move it quickly have been predictably excellent. But he’s also been a huge attacking threat – something lesser seen at Chelsea. His 15 open play passes leading to a shot is the fourth most in the competition, behind Pedri (23), teammate Marco Veratti (18) and Pierre-Emile Hojbjerg (16).

The Italians – hailed not just for their thoroughly enjoyable attacking football but their lack of ego – believe they have one standout star in their ranks. “We call him the professor,” said Lorenzo Insigne. “It is not up to me to say who should win it [the Ballon d’Or], but Jorginho would deserve it.”

No player has made more appearances in Mancini’s three-year reign as Italy boss and no outfield player featured more for Chelsea in their Champions League-winning campaign. Jorginho is not only relied upon by club and country, but has been at the heart of dramatic change for the better with both. He deserves respect, acclaim and – if Italy win Euro 2020 – perhaps the Ballon d’Or too.