Home F365 Features Jota, Grealish will be crucial but Guardiola has advantage 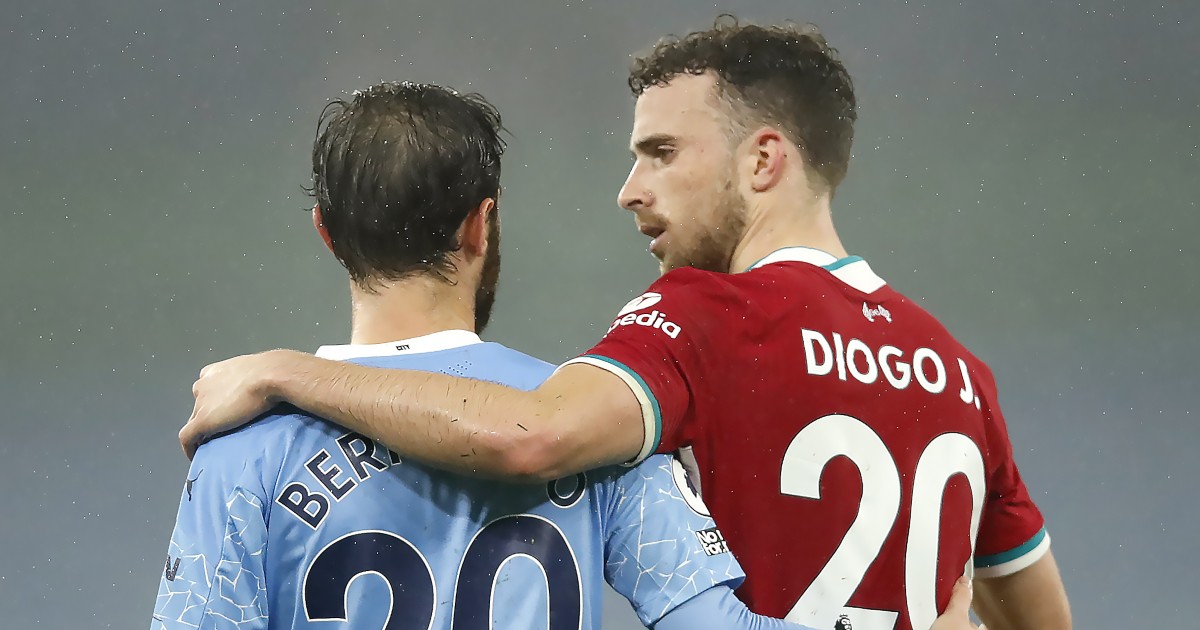 Jack Grealish and Diogo Jota will be crucial when Liverpool host Manchester City. But Pep Guardiola has the advantage over Jurgen Klopp.

Manchester City’s 1-0 win over Chelsea last weekend was an important moment in the title race and the best possible outcome for neutrals. City looked to be on the verge of waning, a couple of bad results away from a mini-crisis as Pep Guardiola’s press slowed down and his midfield started to look brittle. Then an outstanding team performance put them right back into contention. Chelsea, meanwhile, showed they are fallible, thus handing Liverpool a major boost.

It looks as though we really will get a three-way title challenge that goes all the way through to May. Games like the one this Sunday, then, have taken on huge significance, and unfortunately for neutrals that could mean even more caution; it’s more important not to lose six-pointers, and stay in contention, than it is to push for the win.

A congested, low-scoring tactical battle
The rivalry between Jurgen Klopp and Guardiola continues to evolve, and it is fair to assume the days of those end-to-end matches are behind us. The Premier League has moved into a quieter, more reserved phase of clashes between the top teams as managers sit a little deeper and press only in bursts, as we saw in City’s win at Stamford Bridge.

It was a fascinating game from a tactical perspective but relatively low on goalmouth action, a contest defined by brief moments of pressure or anticipation in central midfield, of tight spaces and gaps opening up for a millisecond. In matches like these, it’s as much about the through balls that are almost played as those that actually are. Sunday’s headline fixture at Anfield will be similarly tense and claustrophobic, an intense midfield battle between two teams who immaculately compress the space and stay together.

Substitutions and in-game tactical switches are key
Man City won the last meeting between the teams 4-1 at Anfield, and although a lot has changed since then (Liverpool have their defence – and their confidence – back for a start) that result does give some indication of what to expect. Back in February, Liverpool sat surprisingly deep, creating a claustrophobic game in which Man City struggled to build through the lines. But that all changed when Guardiola switched from a 4-5-1 to a 4-4-2 in the second half.

Putting Bernardo Silva and Phil Foden up front together confused the Liverpool defenders and, as a pair of false nines, they dropped between the lines to join Ilkay Gundogan and Rodri in a four-man midfield that began to run the game. Clearly, Man City aren’t going to repeat that trick; part of the fun of the Guardiola and Klopp rivalry is that they are always second-guessing each other, rarely using the same tactic twice.

But it tells us that if this match is to have a winning goal it may be the result of an in-game switch. The managers know each other too well to make errors in their initial selection, creating a bottle neck in midfield and the fricative, squeezed, low-chance game we all expect. Nobody can predict, however, what either manager will do to shake things up.

Then again, Guardiola does have a deeper bench and is considerably less wedded to a specific formation than Klopp, giving the Man City head coach a slim advantage here – possibly reflected in the fact Liverpool have only won one of the last seven meetings between the sides in all competitions.

Grealish versus Milner is the game’s key battle
Liverpool will again sit off a bit, hoping to force Man City into sluggish sideways possession of the sort we have seen in several matches this season already. Southampton and Tottenham Hotspur managed to reduced Guardiola’s side to passing in a predictable U-shape, having blocked off the passing lanes into central midfield, and certainly Klopp will expect to do the same.

But even if that was to happen, it will only mean Jack Grealish sees more of the ball. Grealish is the natural outlet in these situations, hence why he has had more touches than any non-defender for Man City. He is already their chief playmaker, ranking third in the division for chances created behind only Bruno Fernandes and Trent Alexander-Arnold.

It would have been a fantastic tussle on that side, but unfortunately Alexander-Arnold has been ruled out with a hip injury. James Milner is widely expected to deputise, a move that will give Liverpool greater defensive security on that side but is clearly a downgrade in terms of agility. Grealish’s main threat in a City shirt has been taking on the right-back on the outside, getting to the byline to open things up.

One-on-one with Milner, Grealish should be able to come out on top.

Jota must try to pull Rodri out of position
As for Liverpool’s attack, much rests on how uncomfortable they can make Rodri, a player who can look a soft touch alone in central midfield when opponents counter through the middle – but who was exceptional against Chelsea.

Thomas Tuchel’s main tactical error that game was playing a 3-5-2 that left Romelu Lukaku and Timo Werner disconnected from the Chelsea midfield. This made it relatively easy for Rodri to sweep up, following in behind an outstanding Man City press that kept the hosts penned in and unable to pick out the runs of their dual strikers.

Liverpool’s Diogo Jota must ensure his team do not fall into the same pattern. Keep an eye on his capacity to drop off the front and provide his midfielders with a pass through the lines; Jota’s movement, along with Sadio Mane’s to his left, could give Rodri too much to do, allowing Liverpool to break quickly behind Man City’s high defensive line.