Spurs were rubbish in the first half, but Kane and Son were extraordinary in the second... 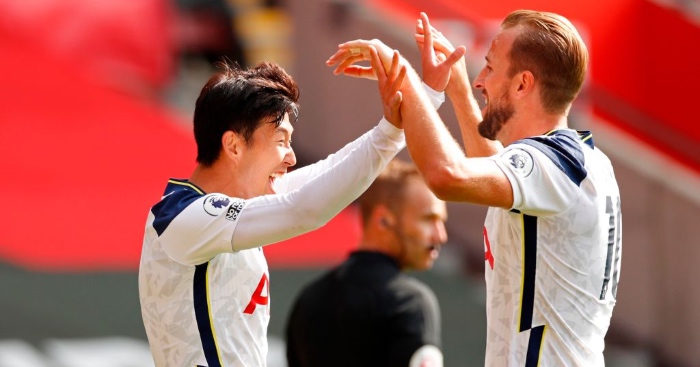 ‘Allowing teams to pop the ball merrily to each other isn’t necessarily an issue. Jose Mourinho teams of old were happy to cede possession, but in the knowledge that forward balls would be snuffed out. This team – as Eric Dier proved as he watched Danny Ings drifts off his shoulder – don’t have that luxury: the defence isn’t good enough to sit and absorb. Particularly when Harry Kane and Son Heung-min are so isolated and the balls forward are ill-timed, inaccurate, or both.’

That was written at half-time. Other than the equaliser, which saw a bit of quality from Tanguy Ndombele and the first of what turned out to be many instances of supreme link-up play between Kane and Son, Spurs were dreadful.

They just looked a bit confused: by what Southampton were doing and what they were supposed to be doing; what the plan was.

The Southampton chances – and there were plenty of them – came either from a turnover in possession, which happened time and again, or – more worryingly for Spurs – when they simply fancied creating one.

Danny Ings’ goal was brilliant. The touch over his shoulder and the finish: he made it look easy. But that was the problem throughout that first 45 minutes, Spurs allowed Southampton to make everything look easy.

But – and it is a big BUT –Tottenham have Kane and Son. Four goals for Son; four assists for Kane. Four beautifully composed finishes from Son; four perfect passes from Kane.

Both of them are and proved they are world class footballers on Sunday. Southampton’s backline was very high, and midway through the second half their confidence was utterly shot. But the efficiency, technique and skill from Tottenham’s two front men was extraordinary.

The key was Kane. We’ve seen him take on further creative responsibility in the last couple of seasons: dropping deeper and building the play. But this was on a different level. James Rodriguez and Bruno Fernandes have shown us what the Premier League’s been missing in classic No.10s, but Kane was the perfect false nine at St Mary’s.

Shrugging off defenders who followed him into midfield, simple touches out of his feet and perfectly directed and timed through balls for Son. The South Korean’s finishing was unerringly brilliant, but – as mad as it may sound as he notched four – he was the second best player on the pitch.

As poor as Tottenham were in the first half, Mourinho deserves credit for their upturn in performance in the second. Taking Ndombele off after his strength, control and turn had set up the first goal was bold, harsh even, but his replacement Giovani Lo Celso gave the Saints midfielders a more advanced problem to deal with, drawing the attention away from Kane – the real danger.

The forward balls that were being pumped over the top to varying degrees of success were instead being fired into Kane’s feet, which on a day like this is a far surer thing. Son then delayed his too-eager first-half runs in behind to instead cut through the Southampton defence in the second stage of play. It was too metronomic a pattern to be a coincidence.

This was a directive we can criticise Mourinho for not hammering into his players before the game, but must also praise him for recognising as the area to hurt the opposition and initiating in the second. Southampton had no answer.

The defensive problems stand, and Tottenham are still searching for a method which allows them to be comfortable when they lead 1-0, as well as 5-1. And far too few of their players came out of this showing with any real credit.

But Kane and Son offered a glimpse of an identity that has been sorely lacking, the one Mourinho has been searching for and now has the chance to build on. With Gareth Bale.