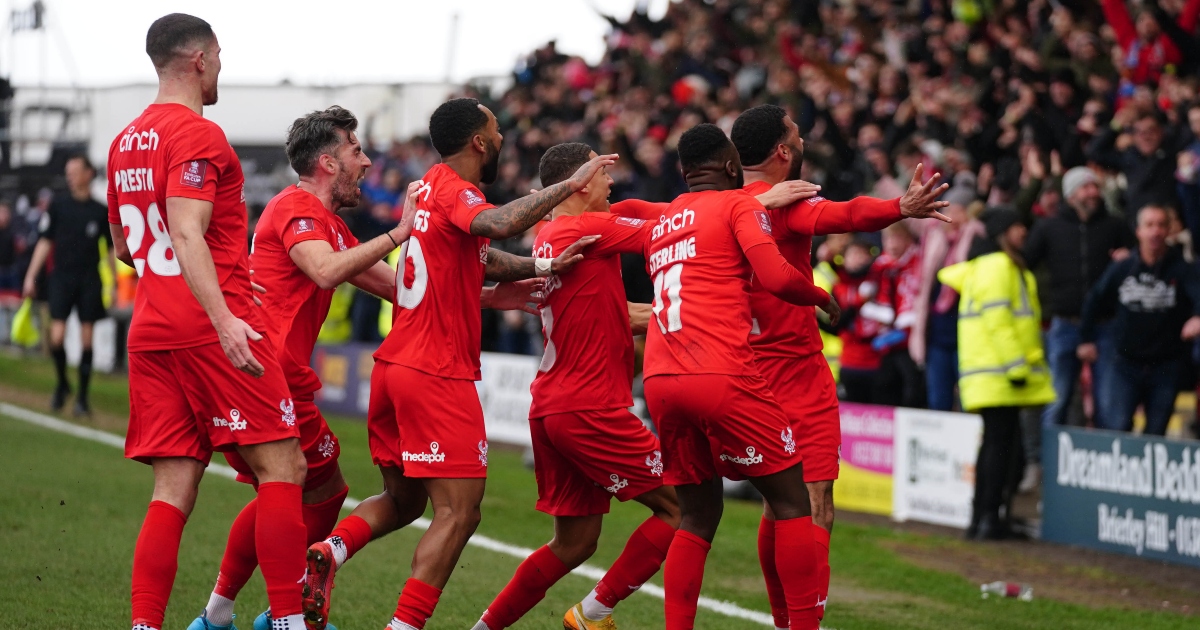 Two stoppage time goals from West Ham broke Kidderminster Harriers hearts in the cruelest of cruel defeats to deny us all one of the greatest giantkillings in FA Cup history.

Kidderminster came within two minutes of joining Luton Town and Lincoln City to become just the third Non-League side to knock Premier League opposition out of the FA Cup on Saturday, and were denied the lottery of penalties by the last kick of the game in extra-time. It was a cruel but joyous day at Aggborough.

West Ham’s Davids will have shuddered at the draw, with the PTSD of losing cup ties to Kidderminster in the Harriers’ famous 1994 cup run not fresh, but engraved on their memories. Gold and Sullivan lost as owners of Birmingham in the third round, while Moyes was part of the Preston team to lose in the fourth. As fate would have it, Kiddie’s journey that year was ended by the Hammers, who snuck a 1-0 win.

My first live football experience came at Aggborough roughly a year later. As will be the case for many a young football fan getting their first taste of what would become a future obsession, it was a day not of watching the football but everything else besides, and not one typical of the often sterile experiences I would become accustomed to at Premier League stadiums.

Fueled on 10p Irn-Bru bars and fluorescent fizzy drinks, the steam engines on the Severn Valley railway provided the entertainment as large men kicked a football from one end of the pitch to the other in our peripherals. One member of our party, who will remain nameless, dressed by their mother (my mother) to match the Kiddie colours, was terrified enough of the toilets to instead opt to relieve himself sat in his bright red corduroy trousers. The white knitted jumper fortunately survived the Panda Pop-enforced accident.

Though the football itself was extraneous, it’s a memory that we continue to reminisce and laugh about to this day. And that will be the case for all of the 5,000 or so Kiddie fans packed in to watch their first, 50th or 500th game on Saturday afternoon at Aggborough, but they will differ in that they will have been unable to take their eyes off the enthralling action. A truism, yes, but this was a bona fide ‘magic of the FA Cup’ kind of day, and it didn’t disappoint.

Russell Penn leads the celebrations for Kidderminster Harriers after they progressed to the FA Cup Fourth Round for the first time this century. pic.twitter.com/sUIqbxjtfe

Kidderminster came through six rounds to reach this point, beating Championship Reading in the third. In order to meet a contractual obligation to highlight the disparity of the two sides: Premier League West Ham are 113 places and six tiers above National League North Kidderminster in the football pyramid. It really didn’t look like it.

Faced with something less than the carpets they’re used to playing on, West Ham left passes short or smashed them out of play, touches were heavy, Mark Noble and Alex Kral couldn’t cope with red shirts in faces, and Issa Diop looked almost laughably uncomfortable with the bouncing balls consistently aimed in his direction.

But despite Alphonse Areola’s hand (or lack of one) in the goal, it was Kidderminster quality that gave them a deserved lead. Omari Sterling – who is enjoying his very own Goal of the Season competition this term – whipped the cross from the left into The Area, Areola came and fluffed it, and Alex Penny calmly side-footed through West Ham bodies into the back of the net.

Never has the “you’re f***ing sh*t” chant been more richly deserved, to be sung with beautiful irony by the home fans, and aimed at the West Ham players, who really were f***ing sh*t. For all of their 74% possession in the first half, West Ham had three shots to Kidderminster’s five, with none on target.

Moyes was forced to turn to his £100m-rated midfielder at the break, but it took Declan Rice until stoppage time to ruin everyone’s fun.

It was hardly backs-to-the-wall stuff for Kidderminster in the second half, with the most notable Hammers moment before the goal a truly pathetic dive by Andriy Yarmolenko, who embodied Premier League priss throughout. The first sign of top flight quality came from Rice in the 91st minute, as he latched onto a pass in the box, cut inside and powerfully toe-poked the ball into the roof of the net. The guy hates magic.

As does Jarrod Bowen, who broke Kidderminster and neutral hearts in the 121st minute as he tapped in the winner.

Deflated, defeated, this remained Kidderminster’s day. Striker Amari Morgan-Smith – top scorer in the FA Cup this season with five – was a consistent menace up top. Man of the Match Matt Preston will be heading balls away in his sleep. Matt Simpson was composed and produced an excellent save to deny Bowen at his near post. Caleb Richards and Nathan Cameron both made goal-saving interventions.

But they were all brilliant – heroes, every one. To the West Ham players, who applauded them from the pitch. To the Kidderminster fans, who all now have an ‘I was there’ trump card stowed away. And to everyone who still believes in, or once doubted, the magic of the FA Cup.