Klopp is 11 games unbeaten against Everton but struggles with Ancelotti. This could be ideal or dreadful. 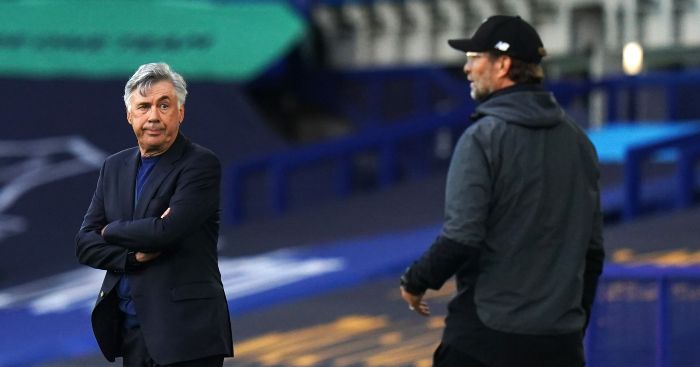 It is not clear precisely what Jurgen Klopp makes of PBP and PPV – WTF seems a safe bet – but he likely shares one thing in common with Premier League clubs. They considered Liverpool being beaten 7-2 by Aston Villa to be ‘the final straw’. He surely wouldn’t disagree.

The most recent game of this ridiculous season sparked an executive decision to charge fans £14.95 to watch matches not previously selected for live broadcast. For clubs haemorrhaging hundreds of millions in vanished match-day revenue, the dominant champions losing by five goals being free-to-air was the last provocation needed to induce change.

So too for Klopp: that humbling might well be enough to force rethinks over the suitability of Adrian; the starting role of Joe Gomez; the attacking dependency on Roberto Firmino; and the deployment of a high defensive line that has caused more than a few splinters to develop on their throne.

A common reaction to defeat is not to blink but instead keep things the same in the hope that those who failed previously are sufficiently motivated to prove a point. But there is no common reaction to a hardly common 7-2 scoreline. Klopp knows whatever decisions he takes this weekend will be judged in the unforgiving glare of hindsight.

A win at Everton would restore pride, momentum, aura, purpose. A defeat would reinforce doubt, fear and apprehension. This is simultaneously the best and worst possible opponent in the circumstances.

That would ordinarily be true regardless of context. The Merseyside derby is rarely an easy game: five of the last six have been drawn or decided by a single goal, with the 5-2 Liverpool win last December an exception that proved to be the undoing of Marco Silva’s rule. But an Everton team in irresistible form, and an Everton manager raising standards as smoothly as he does eyebrows, provide an altogether tougher test than usual.

Carlo Ancelotti is one of few managers Klopp does not have a winning record against. Their eight meetings have produced three victories each and two draws. Perhaps more instructive is that the Italian has never even conceded a goal at home to the German, inflicting defeats of 3-0, 2-0 and 1-0 with Real Madrid and Napoli before June’s sleepy stalemate.

It makes for an interesting dichotomy: Klopp is 11 games unbeaten against Everton, the longest such run of his managerial career by quite a margin.

All manner of coaches have come for the king with varying degrees of execution and style. Most have missed. Roberto Martinez brought no substance and was summarily dismantled. Ronald Koeman tried to go toe to toe and failed. Sam Allardyce sacrificed adventure for attrition and was rewarded with two draws (38% and 21% possession) in as many games. Silva came close to stumbling upon a blueprint that was lost in the dumpster fire of collective defensive collapse less than a year ago. That set in motion the ascension of Ancelotti, who himself was entangled in the club’s crippling inferiority complex when losing to a second-string side at Anfield in the FA Cup.

“I am not used to speaking to the players after the game, but I am going to speak to them about this,” he said of a watershed moment in Everton’s modern progression just nine months ago. “We are going to speak and work together to find a solution to help improve the team.”

Those were not hollow words. Ancelotti has overseen a transformation in mentality, approach and maturity at Goodison Park, establishing an unerring balance in this most chaotic of seasons, simplifying the equation and bridging gaps through wise, focused investment and elite-level coaching.

“I knew from the first day when I heard that he will sign for Everton, I thought, ‘Ah, the next proper challenger in line,'” Klopp said this week. It was the usual lip service from one manager to another team in exceptional form. But the Toffees will hope this finally sticks against their neighbours as they look to step out of a daunting shadow. Villa exposed chinks in the armour two weeks ago that a ruthless side would relish to exploit further.

Everton will confirm or contradict a reputation on Saturday. Liverpool will be playing to protect theirs.