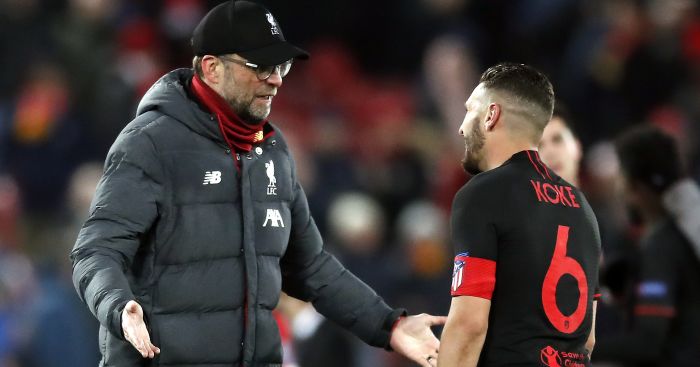 “I am searching for the right words,” Jurgen Klopp says with a sigh, before spectacularly failing to find them when he bemoaned Atletico Madrid’s refusal to play “proper football”.

Do we really have to do this again? This is the sort of nonsense that turned Arsene Wenger into a caricature by the end of his time in England and it’s dispiriting to see Klopp go down this route.

It should absolutely go without saying that there is no one, pre-eminent, proper and objectively correct way to play football. To argue this is to do the great game a terrible disservice. A sport that can only tolerate or allow one narrow ‘proper’ way of playing would be crap. Football isn’t crap. It’s really good.

Teams like Liverpool are one of the reasons why it’s so good. And so are teams like Atleti.

"It's difficult to explain these goals, to be honest. The boys fought hard."

"We will come again, and go again. But for now, we are out."

The full four-minute BT interview is well worth watching because he is, as ever, engaging and open. You don’t want to lose that, even if it does mean he sometimes comes out with something that is, in all fairness, absolute bollocks. Even when he’s wrong he’s still worth listening to; even when he’s wrong in such a hack and cliched way, he’s still worth listening to. Christ, we can all aspire to that.

And Klopp being Klopp, he has the self-awareness to concede he is being “a really bad loser”.

But while he was right to hail the efforts of his own team, he was so wrong to dismiss Diego Simeone’s style as improper or a somehow lesser way of playing the game.

It’s just a really bad look. Simeone is answerable to nobody but his own club and supporters. They seem pretty happy.

And it’s not even like Atletico’s way of playing is easy to do. It looks exhausting, frankly. There’s a reason only elite defensive coaches like Simeone and Nigel Pearson have been able to pull such a trick off against this Liverpool side.

And it’s not even like Atletico aren’t fun to watch. Under Simeone theirs has always been a team packed full of qualities any fan would want their team to show, even the things we’re told nobody wants to see. Especially the things we’re told nobody wants to see. Atletico is a byword for shithousery; nobody at Liverpool or anywhere else can possibly be remotely surprised at how they approached these two games. It’s worth remembering that the seeds for this exit were sown in the first leg when Liverpool’s Proper Football brought them precisely zero shots on target in the Wanda Metropolitano.

Atletico Madrid’s approach required a fair bit of luck, of course it did. But, again, that’s football. Liverpool – as Klopp himself readily acknowledged – have had their own good fortune over the last couple of epic Champions League campaigns. It’s pretty unlikely that anyone would beat Liverpool over two legs right now without a bit of good fortune along the way.

Klopp’s Liverpool will go again. There is still only one thing that can stop them completing a truly historic Premier League win. The man himself is a powerful force for good in the game, which is what makes this slip so very disappointing. Like with his team, maybe we now expect too much.

And we have to be careful here. If we don’t want dull and boring post-match interviews we shouldn’t be too critical of interesting ones we don’t like. But that doesn’t mean Klopp gets a pass – not least because, however engagingly expressed, this particular opinion is dull and boring.