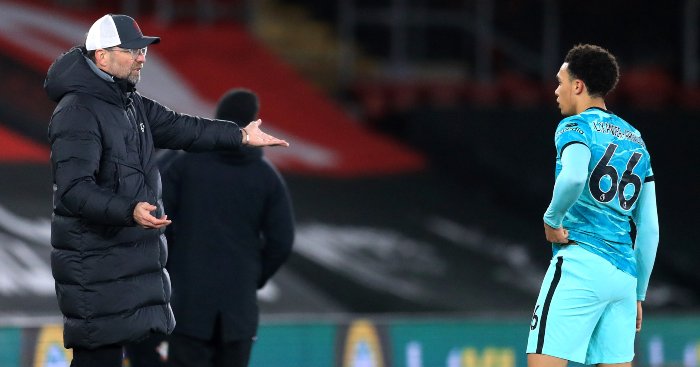 Jurgen Klopp has signed 26 players either permanently or on loan at Liverpool. Goalkeepers and central midfielders each account for six of those, from Marko Grujic to Marcelo Pitaluga. Next come the five central defenders, starting with the sublime Steven Caulker and including the ridiculous Virgil van Dijk. Seven additions have been made across the entire front line, Diogo Jota being the most recent. Then two left-backs round it off: Andy Robertson and Kostas Tsimikas.

It equates to at least a couple of purchases over five years in every position aside from one where there have been none. Klopp named the current incumbent as his best Anfield arrival since his appointment in October 2015 yet the German is yet to bring in a right-back.

He inherited Nathaniel Clyne. He was lumbered with Jon Flanagan. He loved Connor Randall as we all did. He has played James Milner, Jordan Henderson and even Roberto Firmino there. But Trent Alexander-Arnold was the unexpected gift that has only continued to give.

That is not to say that the 22-year-old’s remarkable peaks have come without at least a few troughs. He himself recalled how “a lot of questions were being asked” after being exposed by Marcus Rashford and Wilfried Zaha in successive Premier League appearances almost three years ago. Klopp unexpectedly dropped him for a match against Manchester City in October 2018 supposedly not for poor form, but because he didn’t wish to “disturb” his birthday celebrations. By November 2019, Jamie Carragher and Gary Neville both separately and publicly chastised him for exhibiting the worst habit a professional footballer could ever have: jogging back to defend at counter-attacks.

This run of form must be among his lowest ebbs, coinciding with an attacking bluntness Klopp’s Liverpool has never before been associated with. The defender has two assists after notching six at the same stage last season. He gave the ball away an almost impressive 38 times against Southampton. He cannot even claim to be the most creative Premier League full-back based on this season, lagging far behind Andy Robertson for key passes and sitting level with both Aaron Cresswell and Joao Cancelo.

There are obvious mitigating factors, a recent battle with Covid followed by an injury that decimated his pre-season rather than simply disrupting it among them. The understandable absence of consistency in Liverpool’s defensive selections has been similarly damaging. His last five appearances have come alongside Henderson, Nat Phillips, Joel Matip or Rhys Williams, robbing him of the defensive assurance once offered by Joe Gomez as the right-sided centre-half.

Yet the dearth of genuine competition for his place, the lack of jeopardy, might be the key. It was clearly hoped Neco Williams could emerge and develop in the same way he grasped the opportunity presented by Clyne’s back injury in summer 2017 yet academy lightning has not struck twice for Liverpool. The Wales defender has shared irregular stand-in responsibilities with Milner while understandably struggling to prove his worth.

The last right-back the Liverpool manager signed was a Borussia Dortmund free transfer who is planning to retire in the summer. Lukas Piszczek moved to the Westfalenstadion more than a decade ago and the only right-back Klopp has ever signed for a fee was Patrick Owomoyela for little over £2m in 2008.

Alexander-Arnold needs a rest his manager does not feel he can afford him. There is the chance he plays himself back into form but Southampton targeted and exposed him earlier this month; Manchester United have already done so before and will seek for history to repeat itself on Sunday, much like Klopp is hoping will happen against all odds in what is becoming a problem position.