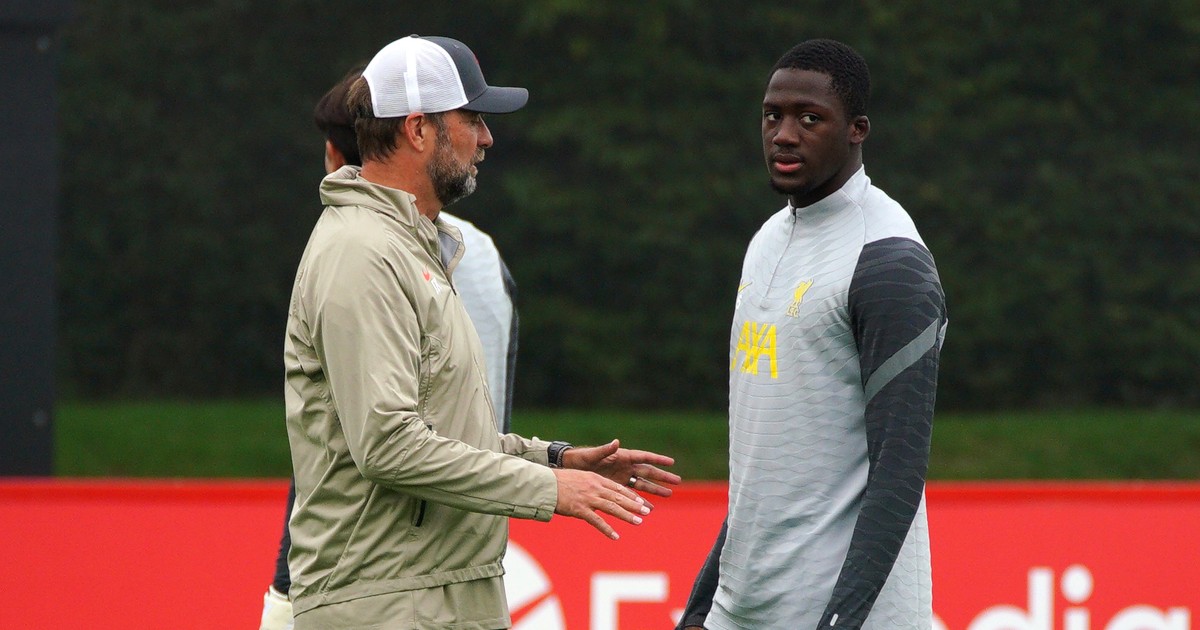 Jurgen Klopp’s exacting methods have moulded or broken many players at Liverpool. Ibrahima Konate will hope to fare better than Ben Davies.

Before Sunday’s 5-0 romp at Old Trafford, Konate had only played a total of 180 minutes of competitive football for Liverpool. He ended up making more clearances than any other player in a very impressive turn.

As the only summer signing by the Anfield club, some people may have raised eyebrows about the Frenchman being the lesser spotted species so far. However, Jurgen Klopp’s training sessions can be brutal initiation ceremonies for newbies. Even ones that cost £36million.

Patience is required. Ask these fellas.

1) Andy Robertson
An apparent left-field £10m signing from Hull City in the summer of 2017, it wasn’t all plain sailing for Andy Robertson. On his first day of training at Melwood, he remembers the dreaded run-until-you-drop lactate test, mainly because he physically retched everywhere. The Scot was relieved that the manager wasn’t there to witness it until Klopp called him “Mr Sick Boy” three days later. Still, that lung-busting effort in the 4-3 win over Manchester City in January 2018 was proof that Robbo was finally ready to charge into the first team. He’s never looked back since.

2) James Milner
If ever there was a man who could take whatever Klopp threw at him, it is James Milner. Mr Utility featured in the German’s Liverpool debut at White Hart Lane in October 2015. During that match, Milner covered over 13 kilometres and made 82 sprints, more than anyone on the pitch. Even so, he was blown away by the intensity: “To see one of the young lads throwing up on the side of the training field in one of his first training sessions, that sets the tone, you know what you’re in for. It was ridiculous really – it wasn’t like we had played at a slow tempo under Brendan.” Six years later, the man of steel was still outrunning everyone in the first game of the season against Norwich.

3) Thiago
There was huge excitement following Thiago’s arrival at Anfield last September. Here was a world-class player and playmaker who had won it all. He wouldn’t need much shepherding. Ah. Well, the Spaniard came into an unstable, injury-ridden team, as Fabinho and even Jordan Henderson were called up as emergency centre-backs. Jamie Carragher called Thiago a “liability defensively” as he struggled with the pace of the game and the counterpress. He also developed a tendency to give away constant fouls in dangerous areas. At one point, he got a (verbal) volley off Henderson for giving away a free-kick against Leicester that directly led to a goal in shambolic fashion. With Liverpool’s current midfield injury list, now is the time for the number six to really shine.

4) Fabinho
The Brazilian defensive midfielder is a key player for the Reds as he showed when calming things down against Atletico in the second half of the 3-2 win last week. When he was originally signed from AS Monaco for £40million in May 2018, it gave the club an enormous lift 48 hours after that crushing Champions League final defeat by Real Madrid in Kyiv. However, Fabinho struggled pre-season as Klopp said: “Much better in offensive pressing, but still struggling a bit as not fresh enough.” His debut was in an EFL Cup defeat against Chelsea where he had difficulty with the pace of the game. However, by January the boss was seeing him as a “new centre-back option”. At least he’s back where he belongs now.

5) Ben Davies
When Liverpool bought Preston’s Ben Davies at the end of the January fire sale, it was clear the Reds’ defensive issues had gotten out of hand. Klopp said: “Ben is a really good player but he has to get used to all the stuff here as well. What we have now is options and hopefully it will stay like this. Ben will play when he will play. That’s how it is.” Davies played zero games and was even left out of the matchday squad on a few occasions when Liverpool were down to the barest bones at the back. Ozan Kabak, signed on loan as emergency cover from Schalke, got the nod to partner whoever could stand up in the busted centre of defence. Davies has now been shipped to Sheffield United for the season while poor Kabak was involved in the not so magnificent seven against Chelsea as Konate has taken their spot.

6) Daniel Sturridge
Sturridge had been one of the stars of Liverpool’s 2013/14 title charge but had been injured for the majority of Brendan Rodgers’ final year. When the striker finally managed to train for eight consecutive days under the Klopp, he reported a foot problem following shooting practice and subsequently withdrew from the Europa League tie against Bordeaux in 2015. The manager, while sympathetic to the forward’s long-standing injury issues, said Sturridge must learn how to acknowledge new methods. “Your body has to learn new intensity of training and you have to learn what is serious pain or what is only pain,” the German noted. Ouch. Studge had some very useful cameos with those stunners against Chelsea and Sevilla, but never really gained complete favour as his body could not do what Klopp needed it to.

7) Kostas Tsimikas
Anfield must have been all Greek to Tsimikas (groan) for the majority of last season. Signed last August as defensive cover for Robertson, he didn’t make any starts in the Premier League as Klopp tried to squeeze as much out of the Scot given Liverpool’s central defensive crisis. According to one internal source, Klopp had “not seen sufficient evidence in training that he has adapted to the team’s style of play”. However, this season, Robertson’s early injury created an opening which Tsimikas took with both hands. Mind you, he did get a slap on the cheeks from Milner for dozing against Norwich.