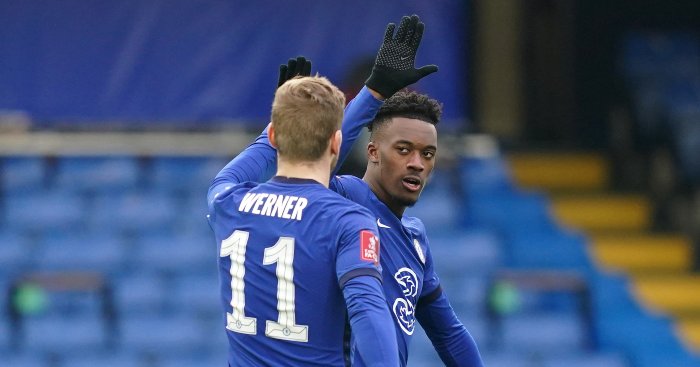 Callum Hudson-Odoi might not agree with the general sentiment that Frank Lampard has been a boon for youth development at Chelsea. Mason Mount, Billy Gilmour, Reece James and Tammy Abraham have undoubtedly benefited from his influence yet that does not reflect the experiences of every player.

Until Sunday, Hudson-Odoi had started as many games under Lampard since his appointment 18 months ago as Ross Barkley. Emerson has still started more. Yet the former Bayern Munich flame is making it difficult for his talent to be ignored any longer.

A goal against Morecambe does little to further his case in the grand scheme of things. It was well-taken: the run was timed excellently, proof that he can excel not only on the wing but through the middle, and the finish enough to beat the solid Mark Halstead after Hakim Ziyech’s glorious chipped assist. He even laid on Mount’s opener half an hour earlier. But that is the least he, Lampard and Chelsea would expect against valiant but ultimately limited League Two opposition.

We have even been here before; this is the third straight year Hudson-Odoi has impressed in the FA Cup third round. A couple of assists sparked hope of a revival under Maurizio Sarri in 2019, while 2020 started with a goal against the same team in another 2-0 win. Neither evolved into anything more than a frustrating false dawn.

Only a fool would pretend he lacks the skill or talent to succeed. Nothing suggests that work ethic or application is a problem. End product is no issue for a player with 19 goals or assists in 31 starts over three interrupted seasons.

The only deficiency in Hudson-Odoi’s arsenal is a consistent chance. He has started more than two consecutive games twice: a run of three matches in October 2019 followed by a solid sequence of six fixtures from January to February 2020. But they are the exceptions to a rule of drip-fed minutes and scattered opportunities. Any player will tell you that regular chances are a crucial part of any young player’s diet. Hudson-Odoi has been starved of that through no fault of his own.

We all love Pulisic but on merit I’d say Hudson-Odoi deserves to start on his favoured left side currently.

Ziyech provides something different on the right & we need that arrogance to play risky passes and take shots from distance.

It is easy to forget how young he is. Emile Smith Rowe is around three months older and benefiting from a prolonged run of first-team faith across London. For all of the obsession over how much more Phil Foden should play for Manchester City, there is a curious silence when it comes to the younger Hudson-Odoi at Chelsea.

The challenge for Lampard now is to prove where his priorities lie. This is not a question of youth versus expensive imports, but of form against proven pedigree. Hudson-Odoi is producing what Christian Pulisic currently cannot. He is playing better than Timo Werner, than Kai Havertz, than Ziyech. He and Olivier Giroud are Chelsea’s most effective forwards against any standard of opponent. It is time they were treated as such.

In the case of Hudson-Odoi in particular, it would be a grave indictment of Lampard and an insult to his reputation not to nurture and harness that quality. If next January brings another ray of hope amid clouds of uncertainty then that will be one of the manager’s biggest failings. Hudson-Odoi is precisely the sort of open goal Lampard used to relish.