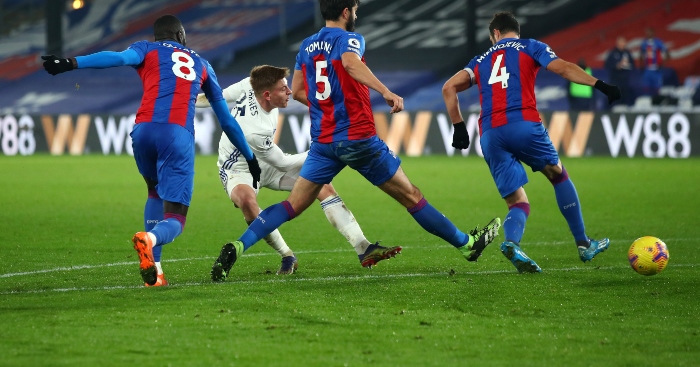 Brendan Rodgers felt he could do without Jamie Vardy and Youri Tielemans while making a raft of changes for Leicester’s trip to Crystal Palace. The Foxes boss willingly accepted the need to sit Vardy on the bench given the two-day turnaround from the draw with Manchester United, but there were some players Rodgers was unwilling to rest.

Kasper Schmeichel, as ever, was in the sticks; Jonny Evans was required as the steady hand at the heart of the defence; while James Justin now stands alone as the only player to play every minute of Leicester’s Premier League campaign so far. Rodgers made only a couple of changes to his rearguard, but among his front six, just Harvey Barnes retained his place.

The recently-capped England international has emerged as one of Rodgers’ blue-chip brigade, highlighting his status with two goals in less than 52 hours, both dripping in quality and importance.

The first pegged back United at the King Power on Boxing Day before Barnes bailed out the Foxes when they were toiling against a Palace side desperately clinging to their first goal scored since conceding 11 to West Ham, Liverpool and Aston Villa.

Both finishes highlight big steps Barnes has taken in his game. While settling into the Leicester side, the doubts around the 23-year-old centred on his finishing. It took Barnes 38 shots to register his first goal, at West Ham in April last year. He has added 16 since, 11 in the Premier League, with six this season coming from 32 efforts.

“I’ve been working on finishing and working on my movements to create goalscoring opportunities,” said Barnes prior to the start of the season, and it shows. Both goals in recent days came from what could barely be described as half-chances, with similarities across the pair. Both involved shifting feet quickly on the edge of the box before getting off a shot with his weaker foot. Neither allowed David De Gea or Vicente Guaita to move feet in response, with each effort taking the only route to goal on offer.

There was criticism of Manchester United’s failure to close Barnes down on the edge of the box on Saturday but Palace could hardly be accused of the same thing. Three players surrounded Barnes as soon as he controlled Evans’ header 30 yards from goal, with Luka Milivojevic nipping persistently at his heels. Barnes held off all comers while working the space to squeeze his shot back across Guaita.

A goal out of nothing!

In terms of xG, it was only 0.05 of a chance which sums up Barnes’ progression. During his one and a half seasons as a first team regular prior to the current campaign, his goals tally has failed to keep pace his expected goals total, his xG being around 2.5 more than his actual haul last term and the one prior to that. This season, Barnes is 1.68 up.

His improvement has helped Barnes establish himself for club, and perhaps country too, as a more potent presence than James Maddison. His strike today sees Barnes nudge one ahead of Maddison in the goalscoring stakes since the start of last season, while the son of former York City striker Paul Barnes has two more assists in the same period.

By the time Barnes struck, Rodgers had already tipped Vardy and Tielemans off the bench in the pursuit of a point after Wilfried Zaha had threatened to earn Palace all three. But even the introduction of Leicester’s two most important presences failed to spark them into life. Palace were comfortable after emerging for the second period with renewed vigour having stood off the Foxes for the most of the first half. Until Barnes popped up in the 83rd minute, Guaita had not a save to make after the break as he looked for a first clean sheet since the opening day.

Given the circumstances, Rodgers is unlikely to worry much about a stodgy second-half performance. Because of Barnes, the Foxes need not fret about missing another chance to go second in the table.