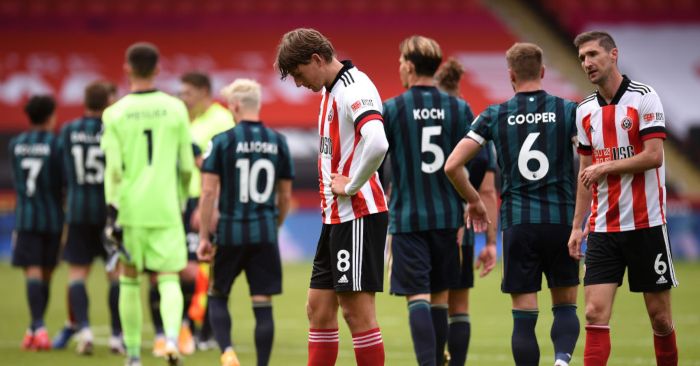 It was always going to come eventually. The fear was that it would be in a game between two tentative teams wary of the consequences of defeat. The surprise was that it almost arrived after a breathless 90 minutes in which both teams pursued victory.

Patrick Bamford ensured the wait will go on: 38 Premier League games have now been played since the last goalless draw. But both Leeds United and Sheffield United can be mightily proud of their efforts.

While many were continuing to argue whether this constituted the first Premier League Yorkshire derby in 19 years or three, those unconcerned with the geographical status of Middlesbrough and Hull were treated to 90 engrossing minutes at Bramall Lane. Chris Wilder and Marcelo Bielsa may not share a great deal in common outside of the game but their football ideologies centre on hard work, movement and innovation. It made for a wonderful match.

Some of the performances were top quality. Aaron Ramsdale was excellent and could do little about the winning goal, his display bettered only by the imperious Illan Meslier, whose first-half stop from Lundstram was sensational. In a division seemingly obsessed with destroying goalkeepers it was refreshing to see two so dominant and confident.

David McGoldrick was full of flicks and George Baldock’s roaming brilliance was matched by that of Stuart Dallas for the visitors. The substitutes were also crucial; Rodrigo and Ian Poveda helped energise the Leeds midfield while Oli McBurnie provided an attacking focal point the hosts perhaps lacked beforehand.

The only starters not to have a shot or create a chance were Ethan Ampadu, Robin Koch and Tyler Roberts: a full Premier League debutant; a central defender; and a striker taken off at half-time. Ramsdale even contributed one key pass as one of the more absorbing games of a ridiculous season reached a crescendo.

In the end two things separated Sheffield United and Leeds: fatigue and a moment of individual brilliance to cut through the emphasis on teams and systems. Wilder’s side notably tired in the final half an hour and Jack Harrison’s cross for Bamford’s header was sublime, worthy of settling any match.

Leeds do suit this level. The reaction to their opening two weeks was predictably favourable in romanticising the top-flight return of a storied team under an iconic manager. Bielsa was never going to be blinded by the tidal wave of neutral adulation: he knew Leeds could not maintain such a preposterous conversion rate, nor sustain themselves on a defence leaking chances and goals. This was a step towards the sort of maturity that will keep them safe.

The reductive statement is that a manager like Bielsa would always prefer to lose 4-3 than 1-0, but the inverse stands true too: he will surely savour a hard-fought 1-0 win more than a chaotic 4-3 victory. The defensive mistakes were almost entirely eliminated and while Sheffield United commanded much of the first half, Leeds exerted a control and authority in the second that they lacked against Liverpool and Fulham.

But Wilder must be concerned. Sheffield United did not struggle to create – Lundstram, McGoldrick, Oliver Burke, Ben Osborn and Sander Berge laid on ten chances for teammates between them – but they summarily failed to take those chances. They came up against a formidable Meslier but the overriding feeling remains that a team whose top scorer netted six league goals last season will struggle to capture that particular lightning in a bottle twice.

It has gone almost unnoticed that this was their sixth consecutive league defeat, the club’s longest such run since September 2013. Wilder himself has not been beaten as many times in a row since September 2012. A 0-0 draw would have stemmed that tide but only placed a plaster over the potential gunshot wound that is their lack of goals. Football moves so quickly that Leeds might already have usurped them.