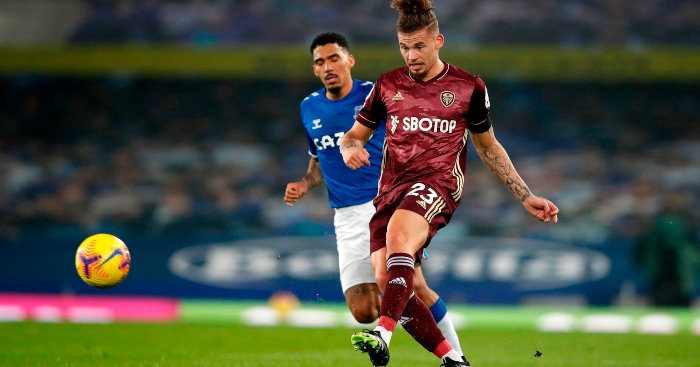 It was a moment of brilliance from their new Brazilian that earned Leeds their first win in 30 years at Everton. But the platform for a gloriously-chaotic triumph was built by their long-serving Loiner.

For the second week in succession, Kalvin Phillips ran the show in Marcelo Bielsa’s midfield. Last Sunday, against an Arsenal side with a compromised engine room, Phillips didn’t have to be at his very best upon his return from injury to stand out. But against an Everton midfield which is widely considered to be one of the Premier League’s most-improved units after a summer rebuild, the 24-year-old raised his game to dominate that too.

Also for the second in week in succession, Leeds kept a clean sheet. After shipping four each to Leicester and Crystal Palace earlier this month, Bielsa’s men have shut out Arsenal and the Toffees. Phillips’ return from injury in time for the Gunners’ visit last week is certainly no coincidence.

If there was any rustiness upon his comeback from a shoulder injury last week, it was gone by the time Leeds arrived on Merseyside. Graeme Souness suggested pre-match that Phillips should get on the scoresheet more, a criticism which hints at a misunderstanding of the player’s role and attributes. But a goal was perhaps the only thing missing from a virtuoso display at the base of Bielsa’s midfield.

Phillips completed 94 per cent of his passes, finding a Jambo-maroon shirt on 79 of the 84 occasions he sought one. James Rodriguez was Everton’s most prolific passer with 39 fewer. But Phillips wasn’t just recycling the ball while the Toffees backed off. He completed 15 of 17 attempted long passes and succeeded in switching play five times. Into the attacking third he passed 24 times, with 20 reaching their intended target.

The Yorkshire Pirlo to some he may be, but the traits more commonly associated with a Leeds lad were as prominent as you would expect too. Phillips ran 12.1km, further than anyone else on the pitch, while recovering possession more than any team-mate or opponent too. This was a clinic in how to play as a defensive screener. And Gareth Southgate was there to witness it.

Kalvin Phillips for Leeds vs. Everton:

For Phillips, this was his 150th league start for Leeds, but the tangible difference came courtesy of a new boy making only his second appearance in Bielsa’s Premier League XI.

Phillips had to turn in his best displays of the season and one of his finest ever for Leeds to deny Raphinha the Man of the Match award.

The £17million deadline day signing from Rennes made a ‘very quick and instant’ adaptation to Leeds’ style, according to Bielsa last month. But he still had to wait until last week to feature from the start. Against Arsenal, he made a positive first impression but his display at Goodison suggests Leeds have unearthed a bargain.

Bielsa pinpointed Raphinha’s ability to ‘imbalance the game’ as one of the keys to victory, something the Brazilian was unable to do last week despite the manager acknowledging that he had a big influence on the right.

Perhaps Raphinha was helped tonight by the absence of specialist opponent. With Lucas Digne out for a couple of months, Carlo Ancelotti opted to play Alex Iwobi and Tom Davies as wing-backs. On Raphinha’s side, Iwobi struggled with the pace, trickery and directness of his direct rival, which almost certainly means Ancelotti will have to find another solution to the problem of Digne’s absence.

Iwobi had been hooked by the time Raphinha offered the kind of ruthlessness that had been missing in the game’s 34 previous efforts on goal. After taking three touches having being invited by Ben Godfrey to line up his shot, Raphinha arrowed a daisy-cutter into the bottom corner of Jordan Pickford’s net. The Toffees keeper had done more than most in Ancelotti’s defence to keep the sheet clean but, coming through Godfrey’s legs, there was no stopping Raphinha’s drive.

Against Chelsea’s improved defence next week, Leeds will surely have to be more ruthless than they have shown so far this season, especially in the last six days when they have peppered Arsenal and Everton’s goal with a combined 48 shots, with only Raphinha’s effort finding the net. But with Phillips patrolling the back door, Bielsa’s side look far less likely to be punished for their wastefulness.