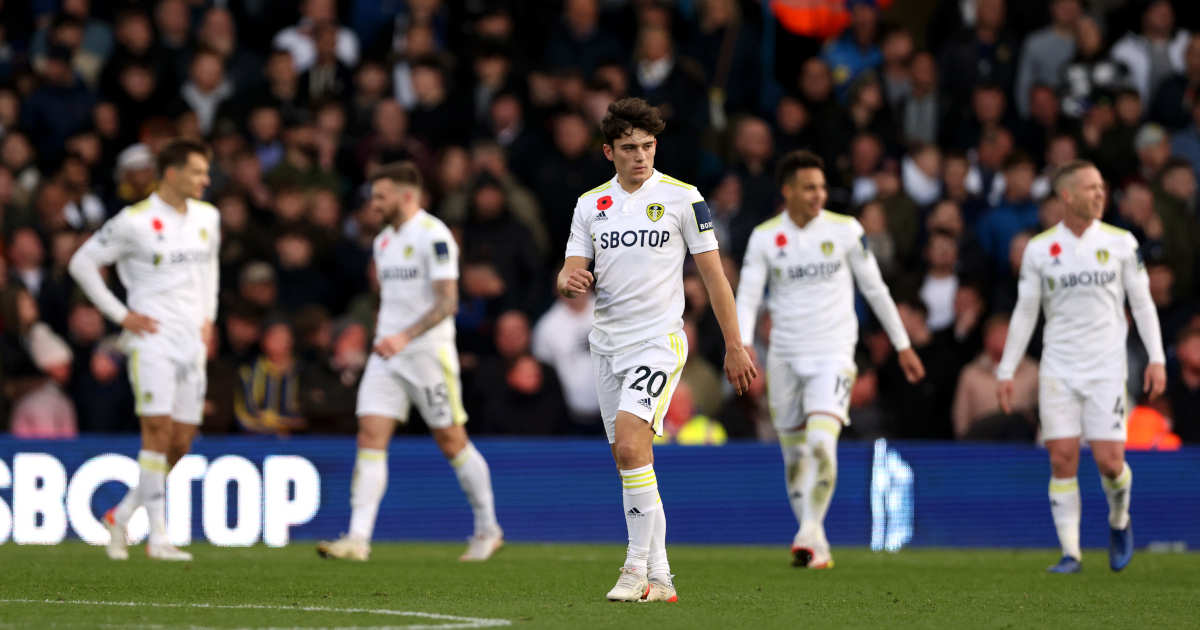 Leeds United still haven’t really got their season going yet, and they’re now sailing close to ending up in a relegation fight.

It was, as the vernacular would have it, a true game of two halves. For 45 minutes at The Tottenham Hotspur Stadium, Leeds United broadly outplayed Spurs and were completely deserving of their half-time lead. By full-time, though, the result had reversed. Two second-half goals won the game for Spurs after what was presumed to be the application of some half-time rockets by Antonio Conte, and Leeds were left where they were before; in 17th place in the Premier League, just above the relegation places and with only Burnley and Newcastle United having won fewer games so far this season.

But what may be instructive about Leeds’ current situation is what happened after their 1992 First Division title. That time around, their defence of the title was one of the weakest ever seen in English football. After winning just one of their last ten matches, Leeds finished their 1992/93 season in 17th place in the table, just two points above the relegation places. If anything, their second season back in the Premier League is starting to look a little like this, when the biggest cause for celebration was their defeat of Manchester United’s Class of 92 team in the FA Youth Cup final. Otherwise, their season was defined by the sale of Eric Cantona to Manchester United and defensive woes which saw them end the season with 31 points fewer than they’d managed the year before.

This season, Leeds have been defined by bad luck with injuries, a somewhat thin squad, and the feeling of frustration that comes with knowing that the team is actually close to where it should be. They’ve lost five league games already this season, but only Liverpool and Manchester United have beaten them by more than one goal, and neither of those games have come in the last two months. But that feeling of one step forward and one step back remains. Much was made of their first league win of the season, which came against Watford at the start of October, but this was followed by taking just a point from their next two games. When they won again at Norwich City at the end of the month, they followed this with a point from their next two games.

And as other clubs have also found this season, injuries can mount up quickly. Patrick Bamford, Luke Ayling, Rodrigo, Jamie Shackleton, Robin Koch and Crysencio Summerville all remain on the injury list. Raphinha had been on it and returned for the Norwich match to fairly devastating effect, but picked up an illness while with Brazil on the international break and missed the Spurs match.

It’s doubtful that he’ll be missing for long, but this only goes to show that sometimes luck – or, in this case, a lack thereof – can be an influencing factor on fortunes. And this isn’t just an ordinary listed of injured players. Players of the quality of Raphinha and Bamford alone can have a transformative effect on any team. But there have been several Leeds players this season who have been on the verge of returning to the first-team squad but have not yet made their returns; the busiest time of the season is now just a few weeks away.

One person with a particularly large amount on his mind is manager Marcelo Bielsa. The Argentinian still has a huge amount of goodwill from Leeds fans, and it seems unlikely that there will be too many protesting for him to lose his job, even though this season hasn’t started as planned. For the time being, stories about him leaving Elland Road remain of the clickbait variety, such as this misleadingly headlined one from the Daily Express, which gave the impression that his departure from the club was imminent, whereas actually reading the article confirms that it’s speculation about what Leeds may do should he not extend his contract at the end of the season.

This is a situation which needs tidying up, but it doesn’t sound like the sort of uncertainty that should end up being relegation-threatening. Bielsa, for his part, remains on the fence about strengthening the team in the January transfer window. If these players do not start returning from injury soon, Bielsa might find that he has no choice but to bring in reinforcements in January. Seven of his nine substitutes against Spurs were teenagers, and although it is expected that Leeds’ injury problems will ease, we may expect new faces at Elland Road in the new year.

By the time that window opens in January, we’ll have a better idea of whether any additional investment needs to be made. Leeds have eight fixtures in the five weeks before the new year, and should they still be just one place above the relegation places by that juncture, alarm bells may well be starting to sound at Elland Road. There remain signs for optimism. The injured players will be returning, and the team’s performance in the first half at Spurs gave a hint of what they’re capable of, albeit against opponents who were booed from the pitch by their own supporters.

But there will come a point at which their stop-start season will have to get going, or 2022 could start with the threat of relegation in the air. Given that it took them 16 years to get back after the last time they went down, it’s danger that few around the club can afford to ignore.