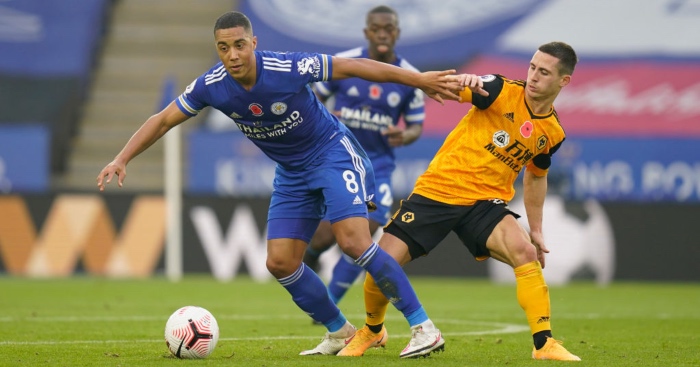 Leicester won their seventh and eighth penalties of the season on Sunday. The first was another handball decision fraught with haplessness; the second a clear foul by Rayan Aït-Nouri. Jamie Vardy slotted the first before seeing his second saved by Rui Patricio. Fortunately just the one was enough to secure victory for the Foxes, taking them to the top of the table. It was a game without a huge amount of quality, but any opportunity to see Leicester’s midfield is well worth the time…

The fluidity Bredan Rodgers has them playing with is fascinating to watch. They play as a flat four in defence and notionally as a kind of tilted diamond in attack, with Youri Tielemans and Nampalys Mendy in front of the defence and James Maddison and Dennis Praet directly ahead of them.

But to pigeonhole them into a theoretical formation is doing them a disservice. Other than Mendy – who does fundamentally stick to his role at the base – the interchange and adoption of different positions through the game, according to the state, pace and swing of it, is unlike any other team in the Premier League.

The peculiarity comes through their similarity. Of the three, Maddison would likely be considered the most creative, Tielemans more of a metronomic passer and Praet something of a happy medium, generally operating the highest of the three. But throughout the game against Wolves – as has been the case throughout the season – each of them could be seen enacting the roles more conventionally associated with the others.

One minute it was Tielemans playing quarterback, seeking out Maddison on the wing, with Praet making a late dash into the box. Next it was the Belgian duo making a triangle with Vardy having dropped deeper and Maddison going past them in behind.

Managers frequently talk of the importance of players knowing roles. The impressive thing with Leicester’s midfield is the complexity of their multi-faceted duties, mastered while maintaining a free-flowing aesthetic in the football they play.

That trading of roles was evident in a first half they dominated, while their defensive proficiency was called for in the second. Leicester’s Europa League exploits on Thursday took their toll after the break as Wolves started to get a foothold. Were it not for Kasper Schmeichel’s stunning save from Ruben Neves, Wolves would have won a point they probably deserved. Had Wesley Fofana not been playing, Nuno Espirito Santo’s side would likely have collected all three points, the 19-year-old was quite brilliant.

But an ability to see games out, to grind out results – as Spurs did when they briefly held top spot earlier in the day – is crucial for Leicester given their European commitments. They won’t be able to maintain the energy required to play with the oomph of that first 45 minutes; recognising this will pay dividends later in the season. Sitting in and absorbing pressure isn’t an admission of inferiority, it’s an awareness required to win against the odds lengthened by Thursday night football.

This wasn’t a vintage performance like in the 4-1 victory over Leeds on Monday. It was circumspect, but perhaps even more impressive as a result. Leicester are top and deserve to be there, with their unique, enigmatic, unclassifiable midfield leading the way.