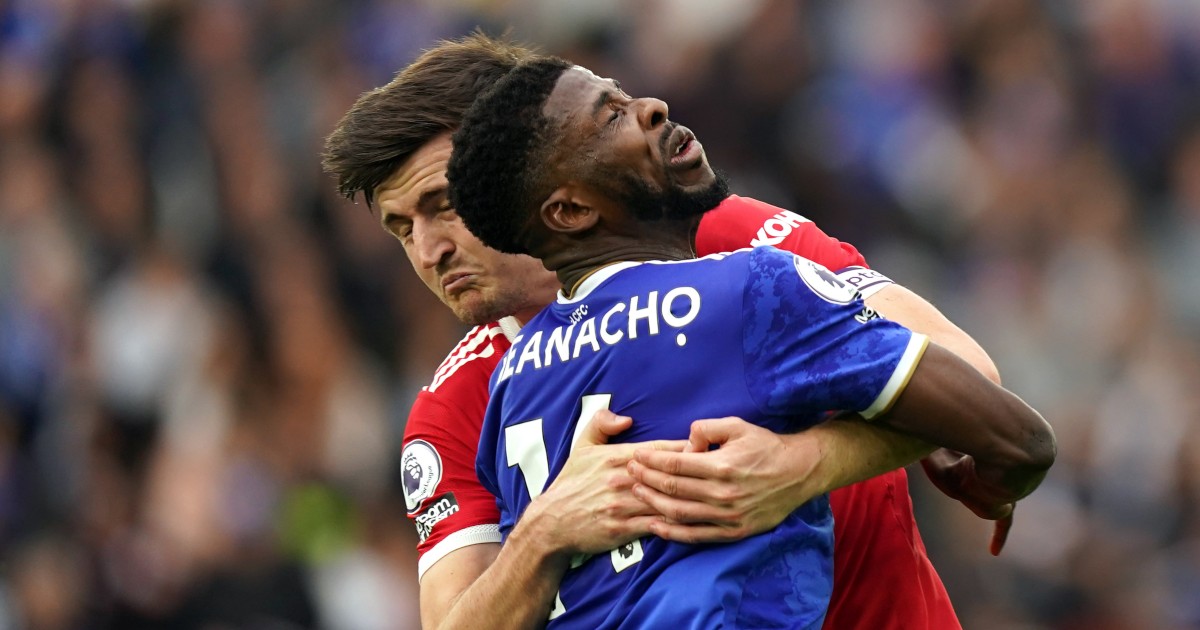 Manchester United and Ole Gunnar Solskjaer discovered there can be a post-credits scene after Groundhog Day. Leicester fully deserved that.

It remains to be seen which random idea balls the manatees push to the forefront of the Manchester United narrative. Bryan Robson telling Anderson Silva that Jadon Sancho has to start on the right, perhaps? Maybe Mark Hughes explaining to Georges St-Pierre the various reasons why playing a half-fit Harry Maguire is inadvisable. The holy grail would be a candid, ten-second clip of Eric Cantona criticising Cristiano Ronaldo to a slightly confused Brock Lesnar but time will tell how this latest Ole Gunnar Solskjaer debacle is framed.

Manchester United looked ordinary early on. They took the lead through a phenomenal Mason Greenwood strike, a moment of ludicrous individual quality. Then they were pegged back after a defensive mistake, falling behind to a set-piece goal.

Away from home, trailing and dependent upon any star quality that could break free from a team and system lacking direction or cohesion, the world watched in anticipation of what would come next: the inevitable equaliser, perhaps even a winner that stretched the credibility of that old adage of a side showing their title credentials by winning when not playing well. A Cristiano Ronaldo tap-in. A bundled Nemanja Matic header. One that goes in off Jesse Lingard’s arse. The method is never certain but the outcome always seems to be.

When Victor Lindelof found Marcus Rashford with an exquisite ball over the top of the Leicester midfield and defence, the England forward burying the chance in his first game of the season, it felt right. It solved nothing, of course. The same problems would exist at Manchester United and a draw would only offset any necessary and genuine attempt at introspection. But Solskjaer was about to discover what happens when Bill Murray wakes up and it is no longer February 2. While Groundhog Day was over, Leicester had a thrilling post-credits scene in store.

Manchester United have played this game in perpetuity to the extent that when Rashford scored, they seemed to think the match was done. Leicester made no such mistake. Ayoze Perez led the charge down the left and poked the ball back to Jamie Vardy, who sliced a wonderful finish into the top corner. Patson Daka forced a free-kick in at the back post eight minutes later as the hosts secured their first win in seven Premier or Europa League games.

That bears repeating. Leicester had been in awful form prior to this game, a post-FA Cup hangover seeing them tumble into bottom-half purgatory with draws against Burnley and Crystal Palace. These were opponents there for the taking.

Yet Manchester United passed up that opportunity and the hosts were emboldened as a result. Shocking though Greenwood’s strike was, Leicester did not allow it to define them. They became the aggressors, the instigators. For the fourth straight Premier League game, Manchester United were treated as equals, if that, and yet again the performances and results proved it.

West Ham were unfortunate to be beaten in mid-September. Aston Villa came to Old Trafford with a clear plan and left with all three points. Everton could well have done the same, the Toffees disappointed with an away draw at Manchester United. Then Leicester looked at the price tags attached to their contemporaries and scoffed their way to victory.

Four clubs with eventual and legitimate designs on one of the places Manchester United believe they have a divine right to. Four clubs given no reason to believe they cannot take it from them. Four clubs handed a superiority complex by a member of the established elite that often acts and plays as anything but. And three upcoming games against Liverpool, Tottenham and Manchester City, each of whom will hope to drive their vulnerability home.

Maguire will hope to be match-fit for those fixtures because he was embarrassed on his return to the King Power. Robbed by Kelechi Iheanahco for the first, he then allowed Daka to drift away from attention for the fourth. A number of players can shoulder the blame for goals from Caglar Soyuncu and Vardy in between but starting Aaron Wan-Bissaka, Victor Lindelof and Luke Shaw were not needless risks made by Solskjaer. Playing Maguire was.

“It’s a difficult decision, of course, because he’s not really trained a lot. But he didn’t feel any reaction to when he trained so we decided to go with him,” the manager said of picking the centre-half instead of daring to pair Lindelof and Eric Bailly. It felt weak. It is the sort of choice a manager opens themselves up to criticism with. Every poor touch or negative action will be attributed to a lack of fitness, justified or otherwise. It backfired in spectacular fashion.

Solskjaer can expect a backlash for that, for Sancho on the left, for Paul Pogba in midfield alongside the immobile Matic, for having to rely on the excellent David de Gea to only concede four times, for not taking his own advice he offered to Rashford on Friday: “Maybe prioritise his football and focus on football.”

Sir Alex Ferguson might even talk to Khabib Nurmagomedov and question the absence of Ronaldo, the cherry atop a cake that continues to collapse in on itself. Solskjaer at least has the defence on this occasion of having started the Portuguese, who was caught offside as often as he had a shot (three times each). Unfortunately for the manager, he pursued that vanity signing when Manchester United needed something more practical; it turns out the systemic issues of his coaching were not reversed by adding an single-minded goalscoring obsessive to a team that already could not function coherently.