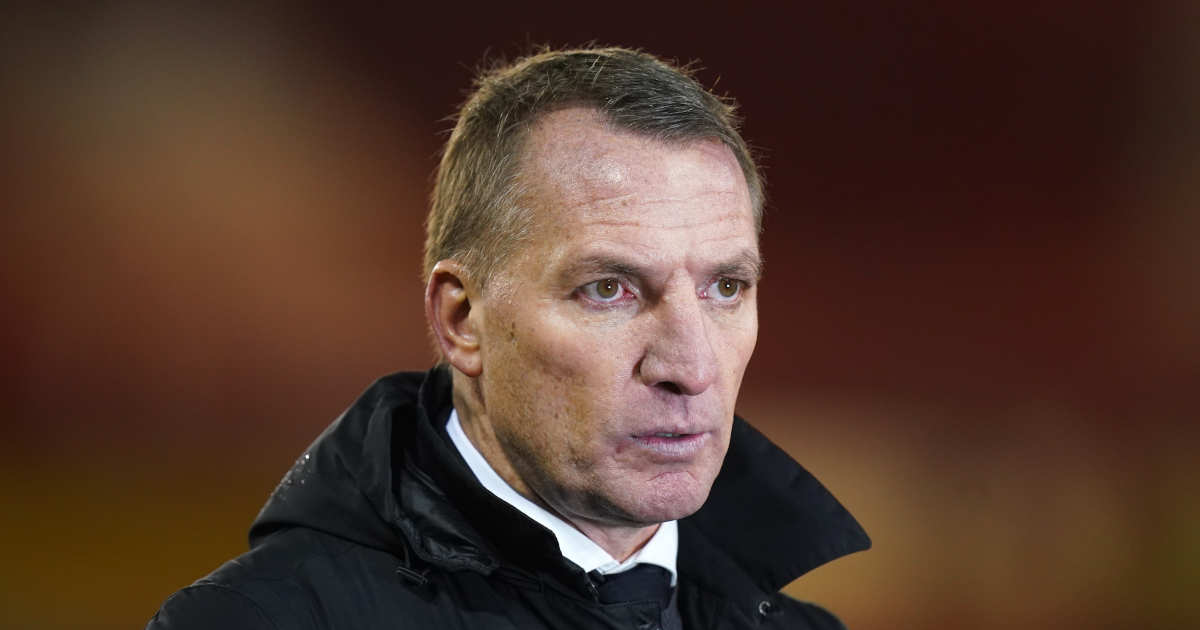 Leicester had a bad result in the FA Cup, but they won it last year and finished the last two seasons in fifth, so why rock the boat?

In all honesty, there wasn’t a great deal else he could do. Brendan Rodgers apologised to Leicester City supporters after his team’s abject performance in the FA Cup at Nottingham Forest, a strangely supine way for a club to surrender an FA Cup that had taken 137 years to win. Of course, managers aren’t judged on their performances in the FA Cup unless there is another underlying issue with their performance, so elimination from this competition is unlikely to leave Rodgers with any sleepless nights, but with almost half a season still to play, there remains the nagging suspicion that Leicester should be occupying a higher place in the Premier League than 12th.

Leicester’s problems certainly haven’t come in front of goal. They have seven players who’ve scored five goals in all competitions, and three who’ve scored nine or more. To put those numbers into context, Wolverhampton Wanderers, who are currently in the running for a possible Champions League place, have nobody who’s scored more than four, while only six players between Manchester United, Arsenal, Spurs, West Ham and Wolves combined have scored nine or more goals in all competitions so far this season.

Leicester’s problems have come at the other end of the pitch. They’ve conceded 37 goals in 20 Premier League games so far; only teams in the bottom seven have conceded more. The defending from set-pieces hovers on the brink of acquiring meme status, ranging from the ‘defenders barely introduced to each other’ to the ‘non-existent’. It’s already cost them 12 goals from set-pieces this season, six of which have come from corner-kicks. Leicester City have, it should be added, also conceded more corners in the Premier League this season (6.4 per match) than any other team in the division bar Burnley.

It was, therefore, something of a surprise that the club didn’t seek reinforcements in the January transfer window, although there are reasons why. An accident of circumstance has stretched their defensive options, but with a full squad and five central defenders on their books, Leicester were reportedly only interested in a short-term loan signing, which they were unable to find during that window. The club spent £55m on three players last summer, and Leicester lost £67m during the Covid-impacted 2019/20 season.

Throwing good money after bad isn’t, in the current climate, a particularly wise move unless there’s a gamble that needs to be taken. Rodgers has acknowledged himself that his squad needs an ‘overhaul’, and if there is no emergency, the January transfer window is hardly the ideal time for such a clear-out. With relegation not being a concern, there was little point in the club throwing good money after bad in a state of panic.

For all the paucity of Leicester’s performance at Nottingham Forest, the keyword for their performances so far this season has been ‘inconsistency’. Leicester haven’t had a run of two successive league wins, draws or defeats this season. They’ve proved themselves capable of beating Liverpool and Manchester United, but at the same time stank the King Power Stadium out in successive home performances against Arsenal and Chelsea. Of all the teams in the Premier League, only Leicester City could concede two goals in the last ten seconds of a match to lose to Spurs. But their performance against Liverpool was no fluke; this occasionally catastrophically accident-prone team can still see off the best.

Where the story of their season does start to become odd is the reportedly ongoing interest of Manchester United in Rodgers as the permanent successor to Ole Gunnar Solskjaer. It’s difficult to see how a former Liverpool manager could fit in as a manager of Manchester United, and it’s even more difficult to see Rodgers being welcomed by United supporters, whose selections for the position would almost certainly be of a somewhat higher profile. But one of the curiosities of the last couple of months is that this rumour has persisted despite the fact that Leicester’s downturn has probably put Rodgers’ position at the King Power at the most risk of his three-year tenure.

But whenever breathless headlines about Rodgers getting the sack begin to emerge, it’s worth bearing in mind what he’s achieved since he’s been at the club. Over the course of the last three years, he’s taken them to fifth place in the Premier League twice, returning them to European football, and winning them the FA Cup for the first time in their history. That would be impressive at any club in the division other than one of the ‘big six’. To do it at Leicester, where the period that followed their 2016 Premier League title win was undoubtedly difficult, is an achievement.

Brendan Rodgers has previously spoken of his commitment to Leicester City, and he’s contracted to the club until 2025. Bearing this in mind, it would make the most sense for all concerned to ignore the background noise surrounding the manager and just get on with it. The fact that Rodgers has spoken of refreshing the squad is an indicator that he has little intention of leaving the club. With plans in place to increase the capacity of the King Power Stadium to 40,000 and a fancy new training ground having opened last year, there is little indication that Leicester City plan to stand still, even if this season has been a little underwhelming. It remains the situation that this club and manager may be best suited to each other than they would to anybody else.