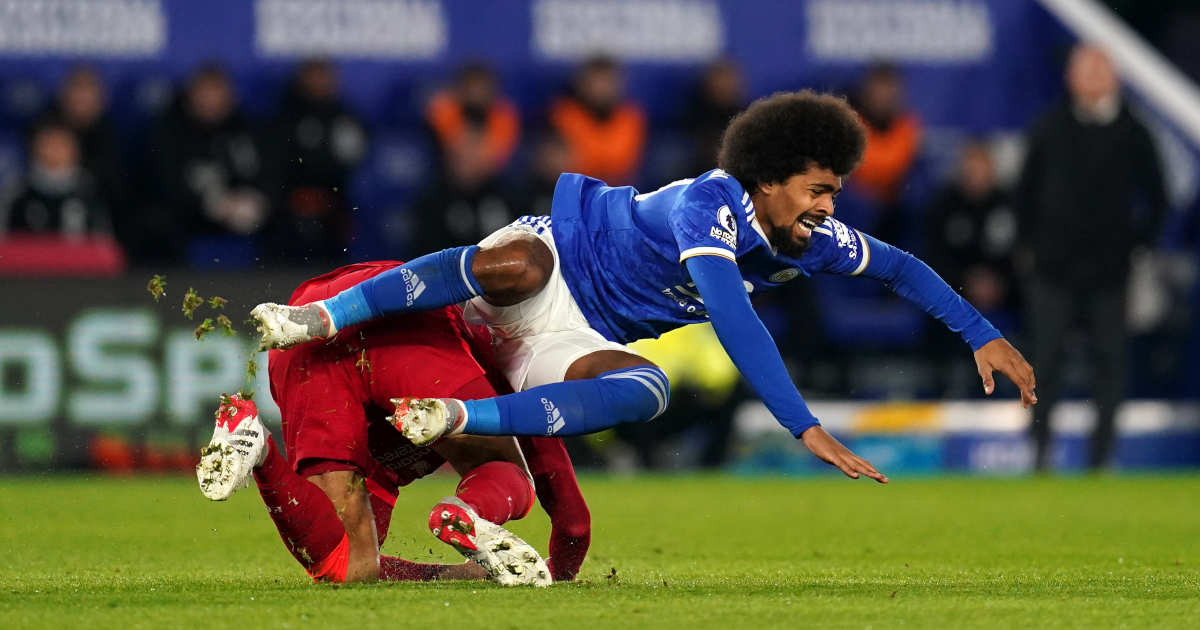 Leicester had their work cut out against Liverpool without their first choice defence, but they beat them, and they deserved the win.

Could there possibly have been a worse time for Leicester City to have been playing Liverpool? They had a vast number of players out injured, including Ricardo Pereira, Jonny Evans, Caglar Soyuncu, Patson Daka, Wesley Fofana, Ryan Bertrand, and others. They missed two Premier League games due to Covid outbreaks, but returned by getting knocked out of the League Cup on penalties after having led twice before being pegged back to a draw by, umm, Liverpool and then conceding six goals away to Manchester City in the Premier League. The cracks caused are starting to show. The dam could burst at any moment.

Brendan Rodgers has borne it with greater patience than others might have done, but that doesn’t diminish the injury crisis at Leicester, all of which made one of the pre-match selections all the more curious when Jannik Vestergaard, Rodgers’ only functioning centre-back, was left on the substitutes’ bench in favour of two makeshift defensive midfielders, Daniel Amartey and Wilfred Ndidi. Four of Leicester’s first choice five defenders were absent and Liverpool, nice and refreshed after a Christmas mini-break brought about by the cancellation of their Boxing Day match against Leeds and with their injury crisis now almost fully cleared up, looked like exactly the sort of team who could do them some damage.

Within a quarter of an hour, Leicester had used up several of their nine lives when Ndidi went in on Mo Salah with what might charitably described as a ‘midfielder’s tackle’, not so much inviting Salah to go over the top of his leg as laying out a tray stacked with Ferrero Rocher for it. Salah took the penalty himself, but his kick was too close to Kasper Schmeichel, who beat the ball down back in the direction of Salah but at too high an angle for the forward to prevent his header sailing up, off the crossbar and scrambled to safety.

Liverpool bore down upon the Leicester goal for much of the next twenty minutes, to little significant effect. Schmeichel was playing exceptionally well, and groaning though it was, this patchwork defence was somehow holding its own. In the closing stages of the half, they even ventured forward once or twice, Jamie Vardy finding himself blocked off at the last moment by Joel Matip after a tidy one-two with James Maddison, who’d had the first half-chance of the match himself. Liverpool had dominated the first half but the Leicester defence held firm to half-time.

And then, just before the hour, they struck. Leicester had started the second half nervously, but the substitution of Youri Tielemans for Hamza Choudhury and Ademola Lookman for Kelechi Iheanacho twelve minutes into the second half proved to be a Brendan Rodgers masterstroke, coming a couple of minutes after Sadio Mane had got through and missed a golden opportunity for Liverpool. Within three minutes of coming on Lookman was found by Kiernan Dewsbury-Hall, bursting past Matip and shooting low past Alisson to give them the lead.

Liverpool continued to buzz around the Leicester penalty area, but without often getting through. Their set piece delivery, against the team that has conceded the most goals from set pieces of any in the Premier League, was terrible. If anything, it felt counter-intuitive. Liverpool were better rested and had considerably fewer injuries, but it was they who weren’t quite there. Leicester, with the patchwork defence who had conceded six in their previous match, held firm, and when gaps did appear Schmeichel appeared impregnable.

Liverpool’s frustration grew, but they were unable to channel it productively. Headers flashed wide. Bad passing decisions were made. By the fifth minute in stoppage-time at the end of the match, hearts were in mouths. This was the point at which Liverpool had decisively pegged them back at 3-3 in their Carabao Cup quarter-final. But against a solid, constant backdrop of clapping from the home supporters the defence held firm. Alisson even appeared in the Leicester penalty area for a late corner which ended, as so many had prior to it, with the ball sailing harmlessly away from goal.

We should know better than to write Leicester City off by now. Many sought to in 2016 as they closed in on the Premier League title, but they just kept winning. Nobody gave them a realistic chance of winning the FA Cup against Manchester City, but they won that, too. There is a spirit and obstinacy about this team that has a habit of transcending normal analysis. Liverpool just didn’t quite turn up enough, didn’t take their chances, missed and open goal, a penalty kick and its rebound. Leicester, playing on despite having had their squad decimated by injuries and illness, took their chance when it presented itself and defended as though their very lives depended upon it.

It’s also a big win for Manchester City, whose recent sparkling form has shown few signs of abating and who are now six points clear of Liverpool at the top of the Premier League. After six consecutive wins, they’ve now taken one point from their last two matches, with their next being a trip to Stamford Bridge to play Chelsea. And just as Liverpool’s lack of intensity in this match was inexplicable, so there is really no-one else for Jurgen Klopp to pin this result upon. Tonight, it was a bad night for his team to be playing a Leicester City team which continues to find ways to confound our expectations.