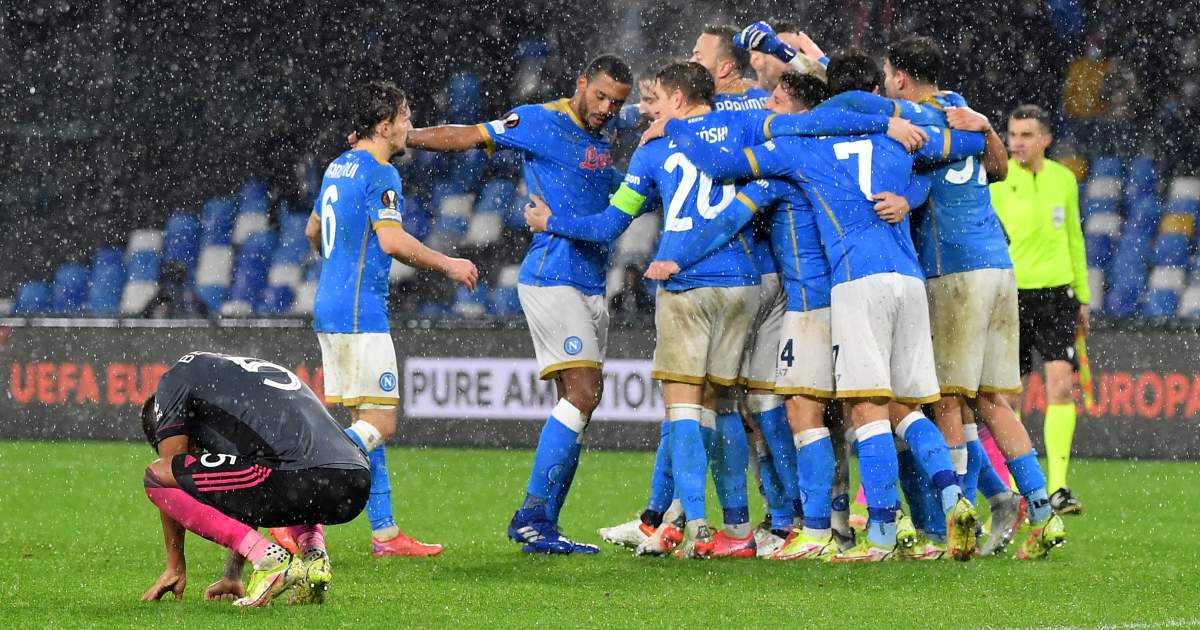 Once it had happened it was actually hard to imagine Leicester’s chaotic Europa League campaign ending any other way: with events 1200 miles away from Naples and Legia Warsaw missing a penalty in the eighth of four added minutes to confirm the Foxes’ descent into the Europa Conference League.

Had Tomas Pekhart scored, long after the final whistle in Naples had confirmed Leicester’s 3-2 defeat to Napoli, it would have secured second place for Brendan Rodgers’ side.

But this is no hard-luck story. That would have been an immense slice of good fortune and Leicester will, rightly, point first to their own many, many failings across this wildly competitive and unpredictable group stage.

Blowing a 2-0 home lead against Napoli, for one. A missed penalty of their own, from Jamie Vardy in a home draw with eventual group winners Spartak that has proved every bit as costly as was feared. And then tonight. This was the archetypal Leicester performance in this year’s Europa League.

They did so much well. They attacked with verve and spirit throughout. They created countless chances against a Napoli side missing Kalibou Koulibaly and in stuttering form both domestically and in Europe after a fine start to the campaign.

It’s just all completely irrelevant when they defend like this, though. It’s costing them in the Premier League and it has now cost them in the Europa League and will probably do so in the Conference as well. They just can’t seem to solve it.

There is arguably never a time when you can point to a good performance apart from the defending as a way of taking the positives. Defending is kind of a big deal. Leicester are in any case well beyond such a point if it even does exist.

Eleven goals conceded in a six-game group stage is not a base from which to build a serious attempt at qualification. It’s outrageous that they still ended up being just a missed penalty 2000km away from sneaking through.

All three goals they conceded here were horrible, but the second was the crowning turd in the bowl.

16 – Leicester have conceded in 16 consecutive matches in all competitions, their longest run without a clean sheet since a run of 17 between November 2005 – January 2006. Breached.

Ryan Bertrand was stood with his hand up appealing for offside while standing a full three yards deeper than the rest of the Leicester defence and playing everyone onside in the middle. The result was not one but two Napoli attackers set clean through on Kasper Schmeichel’s goal, with Andrea Petagna’s unselfish pass making Eljif Elmas’ job straightforward.

At least none of the goals came from a set-piece. Leicester’s quick double strike to get briefly back on level terms did come from set-pieces, though, in a neat twist. The first was a loose ball lashed home by Jonny Evans a couple of minutes after being the flailing defender left desperately attempting the futile task of correcting Bertrand’s error. The second was the best moment of the night for Leicester as Kiernan Dewsbury-Hall’s precise finish from the edge of the box found the bottom corner and set Napoli’s pleasingly capacious net billowing.

But all that good work was undone early in the second half when Napoli once again picked Leicester apart all too easily, one crossfield pass from Piotr Zielinski enough to stretch the Foxes’ defence beyond breaking point. When the cross from Giovanni Di Lorenzo fizzed into the box there were four Leicester defenders and two Napoli attackers awaiting it. Yet there was no doubt where it would fall.

Leicester’s defending was clearly contagious, Di Lorenzo playing an inexplicable cross into his own penalty area moments later from which James Maddison should have equalised but succeeded only in striking a post.

The Foxes fought for an equalising goal that would have dramatically reconfigured the group table as the rain lashed down, but they could not find it with Jamie Vardy heading over in injury time.

That looked like being the last chance for Leicester, but fate had something crueller still planned across the continent.

It was a horrible way to go out, but it was hard to argue Leicester didn’t deserve it. After years of notable and at times spectacular overachievement, the mess they made of this group stage marks considerable underachievement.