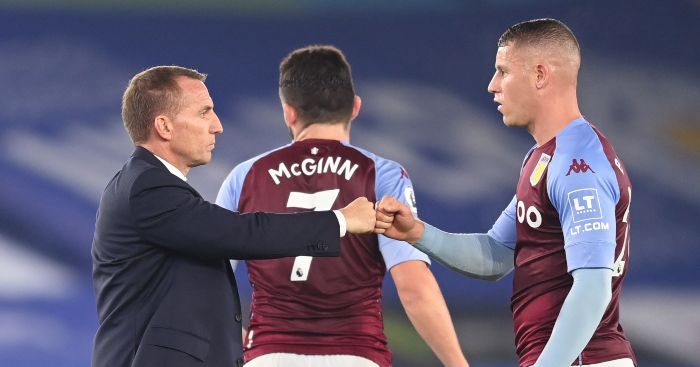 As a man whose glass is neither half-empty nor half-full but instead merely a nefarious restrictive receptacle preventing the liquid from maximising its potential, Brendan Rodgers ran his finger down Leicester’s list of absentees when many others might simply have handed it over as mitigation.

“The international break hasn’t been kind to us, with a number of players coming back as doubts,” he said, robbed not only of Ricardo Pereira, Wilfred Ndidi and James Maddison but also Caglar Soyuncu and the irrepressible Jamie Vardy.

Leicester having their entire spine compacted was described by the manager as “unfortunate” but also “an opportunity for players to come in”.

Rodgers was true to his word. Those who doubted the severity of the circumstances were confounded when Islam Slimani rose from the bench with 20 minutes remaining against Aston Villa for his first Premier League appearance since New Year’s Day 2018.

Claude Puel was in charge against Huddersfield then; it would be harsh to suggest this was a return to those drab days but the second half was particularly disappointing from the hosts.

Where they seemed content to settle for a point, Villa continued to probe. Jack Grealish made up for his lack of ambition off the pitch with an abundance of adventure on it, creating four chances and completing eight dribbles.

The most any other player could manage for either side was two and three respectively. It’s like he’s playing a different sport at times.

Yet it was a signing designed to shoulder some of that burden who proved the ultimate difference. John McGinn’s assist was quietly sublime, sending Timothy Castagne for a slightly early post-game snack with a drop of the shoulder before laying the ball off. Barkley’s strike was crisp and precise: attributes that hardly epitomise his eclectic career to date.

Villa seems like a natural home for him, providing a stable enough defensive platform to allow for more freedom but enough attacking threat so as to ensure his every decision and action need not be perfect. Their balance is unlike that of most other teams.

No player was dispossessed more often. No player had more instances of poor control. But no player was more capable of separating two teams far closer than their last meeting in March when Leicester won 4-0, reignited their Champions League prospects and doomed Villa to an immediate Championship return.

The transformation at Villa in the seven months since has been nothing short of astonishing. Four players retained their starting places from that match, the last to take place in front of fans in the Premier League. Tyrone Mings, Matt Targett, Douglas Luiz and Jack Grealish have survived the systematic, focused and ruthless improvement overseen by Dean Smith, Christian Purslow and Johan Lange. Pepe Reina, Frederic Guilbert, Bjorn Engels, Marvelous Nakama, Ahmed Elmohamady, Conor Hourihane and Mbwana Samatta can hope only for a spot on the bench at absolute best after one of the most effective summer transfer windows of any top-flight club in recent memory.

Leicester and Rodgers can fall back on the obvious excuse. They were without two of their most recent Player of the Year award winners, the current holder of the Golden Boot and a couple of integral defensive cogs. But as they settled for a draw, Villa pushed for more. It took them 13 games to record as many Premier League wins as they have in four matches this season. They would be forgiven for at least viewing their latest vanquished foe’s role as chief challengers to the established elite with cautious intent. Villa are the real deal.