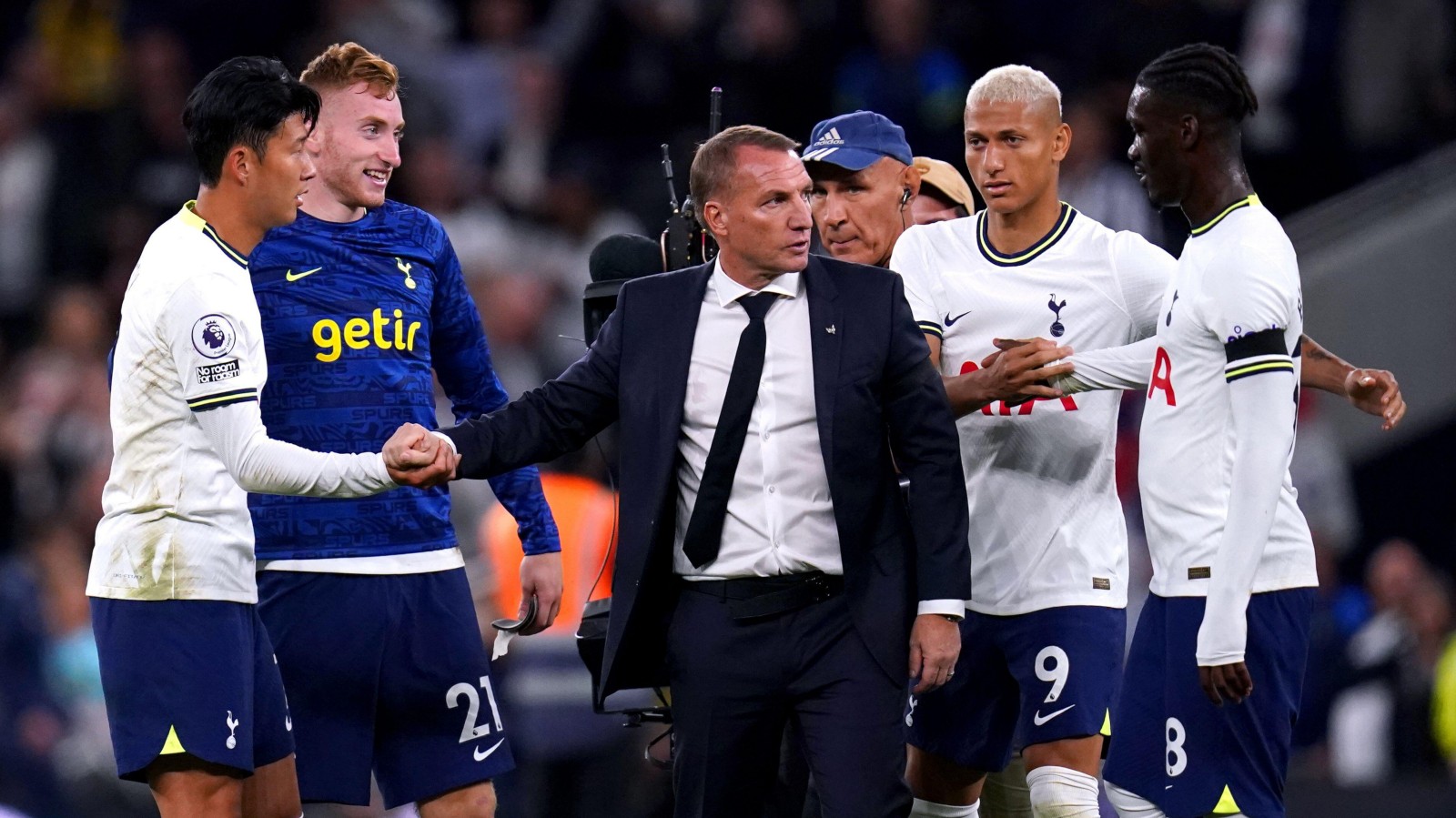 Brendan Rodgers might protest but this is the club that sacked a manager who delivered a miracle. Leicester know what must be done.

You could write this script. It specifically lacked imagination.

The Foxes, having taken the fewest points from winning positions so far this season, squandering a sixth-minute lead to lose by four goals to the team that has rescued the most points from behind, seemed old hat.

Brendan Rodgers and his players being entirely undone by the giant set-piece target on their collective forehead, conceding from corners taken both short and long, was cliched.

Jamie Redknapp’s deference to fellow pundit Wes Morgan in analysing some slapstick defending and calling him “big man” was trite.

There were variations on the standard fare: eight goals are never shared equally between the first and second halves; Antonio Conte celebrating with utmost glee while Heung-min Son steadfastly refused to smile during any stage of his hat-trick was weird.

But this could have been a replay of any meeting between Tottenham and Leicester in modern history. Their games this century have conjured scorelines of 4-2, 4-3, 4-4, 5-4, 6-1 and now 6-2. And that omits nonsense involving Steven Bergwijn.

Two unserious teams played out 90 more unserious minutes to add to the catalogue and truthfully, nothing new was learned.

Kane is phenomenal. Son is the archetypal confidence player who needed either a rest or a shot in the arm. Wilfred Ndidi’s imposter is not very convincing. This is a defence ‘Wout Faes’, if indeed that is his real name, cannot fix. Tottenham are excellent if flawed. Leicester are broken.

Each statement of absolute fact was merely confirmed over the course of Saturday evening. And to them we can add another: Brendan Rodgers is done.

He cannot come back from this. The bridge is collapsing with the sheer volume of water crashing beneath it. The Northern Irishman might point forlornly to two fifth-placed finishes, an FA Cup and a European semi-final but at the club which sacked the manager who delivered a miracle, that will ultimately matter for little.

Leicester parted with Claudio Ranieri in 2017 because it was the right thing to do. It was harsh and heartless but the Italian had overseen a run of one win in nine and six consecutive goalless Premier League games to leave the club in 17th.

Rodgers has celebrated eight goals in his own fate-sealing six-game run of defeats, but the owners might have a few questions about the 20 conceded in that time and his answer will begin and end with complaints about a lack of backing in the transfer window.

It will hold no truck with those who made the decision to cut cloth when trying to “protect the club’s long-term interests” – something which relegation to the Championship, it should be said, would probably not serve all that well.

The manager can have some legitimate complaints about the stale nature of his squad but he knew the hand that was being dealt long in advance and his poker face has amounted to constantly saying supporters just want new signings so they have something new to stare at open-mouthed.

This is not a one-point-in-seven-games squad yet perhaps regularly seeing your manager say he just wants shinier toys to play with is not conducive to off-pitch harmony or on-pitch competence. The sheer degree and variety of individual errors speaks to an irretrievable disconnect.

Rodgers know that responsibility will fall at his door. It did so seven years ago at Liverpool, when he was sacked heading into an international break. It would be a genuine shock if Leicester did not follow suit.