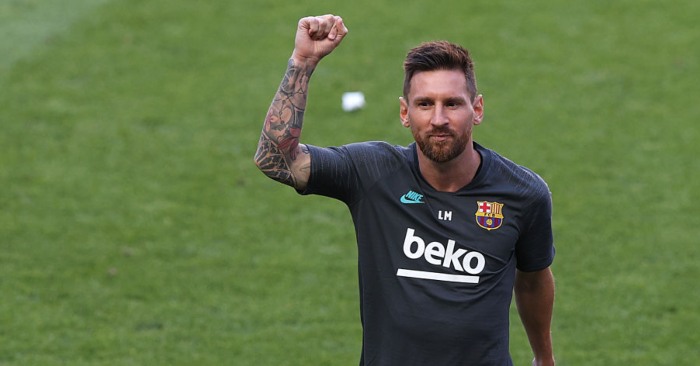 There is a reason more players are moving to Italy. It would make financial sense for Lionel Messi, but what about Inter Milan?

On Tuesday, August 25, the football world was thrown into upheaval.

Lionel Messi, after 16 years, 731 games and 634 goals, signalled his desire to leave Barcelona, and did so in the most unlikely form of a burofax, a formal letter sent by recorded delivery that legally proves the sender has served notice of its contents.

It was the unthinkable, and yet, at the same time, the inevitable. With the 8-2 evisceration by Bayern Munich in the quarter-finals becoming the most recent addition to the long list of scarring Champions League exits, here was a message, load and clear, of disaffection, and in the burofax, an indication of the intricacy that envelops his situation.

For both his legacy and long-lasting relationship with the club, both parties will hope the matter does not end up in court, but the complexity of a certain clause in his contract does raise cause for concern.

Upon renewing his deal back in 2017, the Argentine insisted on including an option that would allow him to unilaterally terminate his employment and walk away for free in the summer of 2020, though the clause stipulated that he had to inform the club by June 10 if he wanted to exercise it.

That date came and went without action, but Messi’s camp believe that the clause was supposed to expire at the end of the season, which was extended due to disruption caused by the coronavirus pandemic. This is the crux of the argument, and neither side appears willing to budge.

Given their current financial predicament, Barca would ideally have someone trigger the €700m release clause written into Messi’s contract, but for obvious reasons this seems implausible.

Potential suitors will be waiting in the wings for developments, ready to pounce on a potential free transfer, and where the star’s wages are concerned, Italian clubs will feel the deck is stacked in their favour. Antonio Conte’s Inter Milan might fancy their chances over Juventus, considering they aren’t already burdened by the wages of Messi’s contemporary, Cristiano Ronaldo.

As part of a campaign to attract high net-worth individuals and drive foreign investment, new tax laws in Italy mean professional sportspeople are exempt from paying tax on 50% of their income and can pay a substitute tax of €100,000 on their foreign-sourced income, which often includes image rights and sponsorship deals.

Not only does this attract players to Serie A – it was said to have been one of the key factors in Ronaldo’s decision to move to Juve – but it also allows the clubs to make savings and offer more competitive salaries in a country where workers are paid on net terms as opposed to gross.

The steady stream of players to Serie A, then, is no fluke. This is the tide of money at work, and if Inter put their hands in their pockets, Messi could well be swept along, too.

It’s also worth considering the ambition of the men that own Inter. The Nerazzuri are backed by Zhang Jingdon, the 28th richest man in China and majority shareholder of Suning Holdings Group, who have left fans under no illusion as to their grand vision for the club since taking a controlling interest in 2016.

And after finishing second in the league and reaching a European final in the season just gone, they already seem to be ahead of schedule in their three-year plan for Conte to bring home the Scudetto. The Juventus juggernaut could not be halted this time around but winning the league last season was always an ambition, not an obligation, and strides were clearly taken in the right direction.

Nevertheless, Conte has made no secret of his dissatisfaction with Inter’s recruitment, despite the club twice breaking their transfer record for him. Further additions in the form of Christian Eriksen and Ashley Young in January were not seen as sufficient, with the Italian cutting a disgruntled figure as the months rumbled on, often lamenting the perceived lack of squad depth.

Surprisingly, though, it looks as if Conte is set to carry on in the dugout, with him and president Steven Zhang patching up their differences after a post-season debrief. There was also an acknowledgement from the head coach that spending this summer would have to be prudent, despite Inter’s income rising by 28% last year. No club, after all, has been able to elude the economic impact of the pandemic, and the €40m capture of Achraf Hakimi has already put a strain on the slender summer budget.

When factoring in image rights payments and bonuses, Messi was earning between €75m and €100m in his latest contract at the Camp Nou, a burden so heavy that president Josep Bartomeu pondered the option of selling him before the latest news broke out, with the club mired in financial disarray. External pressure ultimately put paid to the notion, but for Inter, the question remains: could they even afford him?

If Messi is indeed adamant on leaving – because there is, of course, a possibility that the whole saga is merely a ploy to pressurise the unpopular Bartomeu into resigning – then Barcelona may be willing to significantly lower their asking price in fear of losing him on a free the following summer. But even then, even when factoring in the spike in marketing and merchandising income that would entail his arrival, one significant hurdle stands tall, insurmountable even: Financial Fair Play. Inter have become entangled with the authorities before, and have no desire to do so again.

New investment at the San Siro will ultimately be contingent upon sales, so although reports of Messi’s father, Jorge, buying real estate in the regenerated Porta Nuova district near to the club’s offices will have fans’ pulses racing, the rumours must be treated with a degree of caution.

One man who could be on his way out and who could be used as a bargaining chip in the deal is Lautaro Martinez. According to reports in Spain, Camp Nou has long been Lautaro’s dream destination, but Barca will only pursue his signature if Luis Suarez leaves, which, after new manager Ronald Koeman reportedly told the Uruguayan in no uncertain terms that he was surplus to requirements, is looking increasingly likely.

Lautaro is valued at around £98m so a deal would line Inter’s pockets handsomely, but would still only fund around one year of Messi.

“Fantasy football, a utopian situation,” was how Inter chief executive Beppe Marotta described the Messi links. In a tale fraught with complexity and conflicting agendas, money – and, specifically, Inter’s financial wherewithal – will be the defining factor. You have to wonder whether Conte’s men have enough of it.