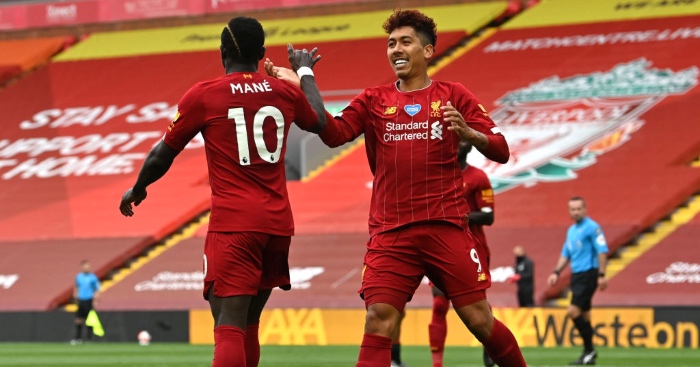 Jurgen Klopp was not impressed by Geoff Shreeves’ line of questioning after Liverpool’s 4-0 defeat to Manchester City. The Sky Sports reporter was gunning for a we weren’t at it response, but Klopp wasn’t having it:

“That’s the second time you ask about attitude. If you want to lead this story that we are not focused in this game then do it, but I am pleased with the attitude of our team. Is the game important to us? I saw a brilliant attitude.”

It was a particularly tetchy reaction to questions the German should really have predicted. And although there was no obvious lack of desire from Liverpool, there was a patent – if understandable – drop in focus, and to suggest otherwise only really leaves room for assertions that Manchester City are in fact the superior side. The ‘on their day’ merchants might argue this to be the case, but it is clearly way wide of the mark when you look at the performances of both clubs across the season and the 20-point gulf that separates them.

Having calmed down a bit, Klopp did sort of admit that his team needed to be more focused. Not explicitly, but by saying they needed to return to winning the “key moments” in games – an ability that has defined their season and goes hand-in-hand with the outstanding levels of focus they have exhibited. Focus that was missing at the Etihad and at Anfield on Sunday, as the champions laboured to a 2-0 victory over Aston Villa.

Klopp resisted calls to give his young stars a chance, instead handing starts to Alex Oxlade-Chamberlain, Divock Origi and Naby Keita, who all came off the bench in the defeat to City, as Liverpool looked for more drive in possession.

Dribbles completed by Thiago in the Bundesliga this season — 71

Dribbles completed by Georginio Wijnaldum, Fabinho and Jordan Henderson in the Premier League this season — 57@BenMcAleer1 looks at why Thiago would be the ideal fit for Liverpool 👇

But they made no difference; the sharpness was still missing; Joe Gomez scuffed a clearance to concede an unnecessary corner in the second minute; Andy Robertson – who Gary Neville said played like he’d had a week on the lash against Man City – miscontrolled the ball a couple of times; Virgil van Dijk was most culpable for lazy, errant passing.

There wasn’t the usual swarming of the forward players around the opposition backline, and although Liverpool had a lot of possession in the final third, the Villa defence were rarely under pressure, with or without the ball.

Bits of tidy link-up play between Mo Salah and Sadio Mane came to nothing, as one or the other made the wrong decision when it mattered, and any hints of a counter-attack were no more than that, with the key passes that have so often pinged from the boots of Van Dijk and Trent Alexander-Arnold this season into the path of a teammate instead easily intercepted.

Salah’s claim of a penalty was as weak as Douglas Luiz’s at the other end, and Villa had the better (only) chances in the first half, as Eric Konsa headed over and Luiz struck a half-volley straight at Alisson. Pepe Reina’s waning goalkeeping skills weren’t tested on his return to Anfield.

Jamie Carragher said at the start of the second half he was expecting a response from Liverpool, but it didn’t really feel like there would be. And the lethargy continued, with Villa growing in confidence with further misplaced passes and wrong decisions from the home side.

El Ghazi was denied by Alisson following a counter-attack from Jack Grealish after a mix-up between Mane and Keita. The resulting corner saw the ball bounce in the six-yard box from a Tyrone Mings knockdown. And moments later El Ghazi should have made more of another great chance as Van Dijk gifted the ball to Luiz in his own half. The champions hadn’t turned up.

Klopp’s changes on the hour mark made the difference. First-team regulars Jordan Henderson, Gini Wijnaldum and Roberto Firmino were introduced, Liverpool looked more like their normal selves, and the opening goal followed shortly after.

It was a good example of Keita’s technical ability that Liverpool see all too infrequently – a perfect first touch following Alexander-Arnold’s whipped ball into his feet and an ideally weighted and directed pass into Mane, who smashed the ball in off the underside of the bar. But the Guinean could easily have been replaced just before that along with Oxlade-Chamberlain and Origi, who both did very little. It was not a great performance from Keita, no matter the overhyped acclaim he will no doubt be receiving on social media for his part in the goal.

Firmino was the main man, and Graeme Souness was right in his post-match analysis that of Liverpool’s famous trio, the Brazilian is the one they can’t do without. The rotation of the front three before he came on was out of necessity – a conscious alternation likely driven by Klopp in search of a solution for their lack of fluidity. But the changing of positions after Firmino was introduced happened without thought, with Salah and Mane moving according to the areas the No.9 picked up. It’s Liverpool’s USP: the quality – along with the marauding full-backs – that makes them who they are.

And Firmino was the first to force a save of any real note from Reina in the 75th minute, battling for the ball and tiptoeing through challenges before the former Reds keeper palmed his shot away.

Curtis Jones – fresh from signing a new five-year deal at Anfield – also impressed after coming on, and wrapped up victory for Liverpool as his deflected shot flew past Reina after the 19-year-old started and finished the move following Salah’s headed knockdown.

But the performance was far from convincing, and Villa could easily have scored a consolation late on as Grealish forced Alisson into a brilliant diving stop to spare the blushes of a Liverpool defence that looks way short of the high standards they’ve set for most of the season. Villa had nine shots in total to Liverpool’s six and just one less on target.

Dean Smith can be proud of his players, and will feel like this was at least a point dropped. But the key, as it has been ever since Wesley’s injury early in the season, will be scoring goals, and again they failed to convert two or three very good opportunities. A game against the champions is a free hit, but feelings of gratification at giving Liverpool a really good game will feel like scant consolation as they leave Anfield with nothing and continue to stare relegation in the face.

Klopp must now admit – to himself at least – that Liverpool’s focus isn’t quite there. And the frequently discussed issue of a lack of strength in depth, particularly in regard to the front three, will grow as long as the replacements fail to impress when given the opportunity.