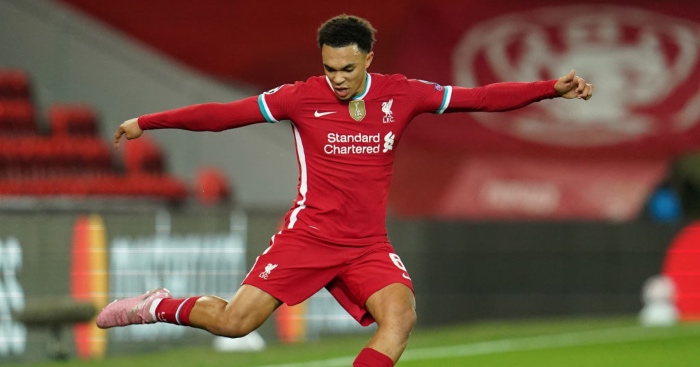 Jurgen Klopp insisted Liverpool weren’t “waving the white flag” before kick-off and explained away the absence of his front three by “moaning” about the “ridiculous” scheduling. It’s lucky he played Trent Alexander-Arnold against FC Midtjylland: he was the only bright spark. He was extraordinary, mind you.

Liverpool were very poor. It was only the second time (the other being the dead rubber againt Newcastle at the end of last season) that not one of Sadio Mane, Roberto Firmino or Mo Salah had started a Champions League or Premier League game since December 2018. Therefore, their replacements will likely take the flack.

And Takumi Minamino, Divock Origi and Diogo Jota were admittedly pretty poor imitations of the fabled trio, but they were no worse than their teammates, who overhit, misdirected and forced passes throughout: the service was absent, excluding anything from the right boot of Alexander-Arnold.

He was the sole source of any discernible quality: spraying typically accurate cross-field bullets; picking out members of the less than Fab Three in dangerous areas; he even made a rare dribbling foray into the box when his normal antics came to nothing.

Trent Alexander-Arnold has been good as every other Liverpool player has been bad. And they have been very, very bad.

There was an audible “f*** sakes” from the right-back as a second switch of play in a minute went over his head out of play. He was the only Reds player whose frustrations could reasonably be aired without claims of hypocrisy.

Liverpool could – and probably should – have been 1-0 down at half-time. Andrew Robertson was caught ball-watching inside three minutes as Anders Dryer – who was very impressive throughout – nipped in behind to collect a simple pass, only to fire straight at Alisson. It was the only time either goalkeeper was worked before the break.

Alexander-Arnold has suffered something of a statistical slump this season compared to last. The key passes are down from 2.5 per 90 minutes to 2 and the number of crosses has fallen from 2.2 to 1.7. Most significantly, in the 50 starts before this campaign, the 22-year-old averaged just under an assist every two games, but in seven starts this term he had managed just one.

But the data is no real indication of a dip in form. He was very good against Sheffield United at the weekend: nearly scoring from his own half with a free-kick; unlucky to have a wonderful assist for Salah chalked off by VAR.

He played four key passes at Anfield on Tuesday and his artistry this time did lead to a recorded goal contribution.

Ten minutes into the second half he cut inside on the right, played a quick one-two with Xherdan Shaqiri, before playing a slide-rule pass across the six yard box for Diogo Jota to tap home. It was simple but brilliant: simply brilliant.

He should have had another assist late on as he picked out Firmino who clipped the ball horribly over the bar. And it was his perfectly weighted through ball that saw Salah race clear in the 90th minute to be brought down in the box before converting the resulting penalty.

The Danish side could easily have left with a point. Just before Salah wrapped it up, Dryer sold Gomez a beautiful Messi-esque dummy that left the centre-back as flummoxed as Jerome Boateng in his infamous polaxeing encounter with the Argentinian wizard. But while Messi dinked his ball in against Bayern Munich, Dryer saw his end the wrong side of the post. It wasn’t the only occasion Liverpool looked shaky defensively.

And that will be a real worry for Klopp, who won’t be bothered by the performance, but rather who he’s going to play at centre-back at West Ham on Saturday. Fabinho limped off after half an hour to be replaced by 19-year-old Rhys Williams. The area of Liverpool’s squad in which they are thinnest has been hit the hardest. Michail Antonio will be licking his lips should a scan on his recurring hamstring injury clear him to play on Saturday.

As will the Fab Three though, who will undoubtedly be back to get on the end of Alexander-Arnold’s slump-proof service.