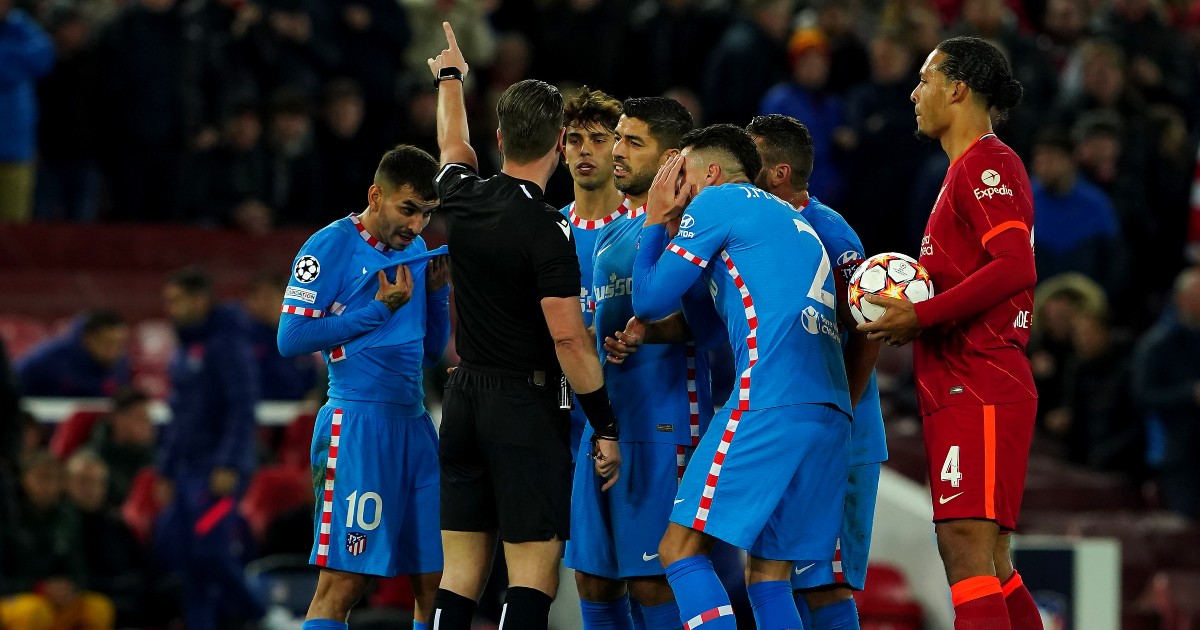 Liverpool remained calm amid the chaos to actually protect a two-goal lead and control a game that could well have descended into farce.

The official that awarded England a penalty in extra-time of their Euro 2020 semi-final with Denmark, Makkelie readily courted the affections of a home crowd once more at Anfield. Seven yellow cards, one red, two goals ruled out for offside and, for Liverpool, three points to secure qualification from their group.

It has become almost impossible for modern referees to adhere to the golden rule that their best performances require them to go unnoticed. Football in the content era has become a series of Netflix-style dramas within which VAR, linesmen and those in the middle are thrust into uncomfortable, unyielding focus.

The visiting side hardly helped them operate in the shadows. Much like Howard Webb, a former police officer born in Rotherham, understandably struggled to control a boisterous Netherlands in the 2010 World Cup final, Rotterdam-born part-time police inspector Makkelie was charged with keeping a handle on Atletico at their Machiavellian worst. Mario Hermoso set an early tone, checking the first of many probing runs Mo Salah would embark on down the right. That opener came in the eighth minute, with Sadio Mane levelling the booking tally soon after.

By the time the Senegalese had made it 2-0 on the slightly less important actual scoreline moments later, Atletico had abandoned any pretence of salvaging a result and instead focused their efforts so intently on goading Mane into a second yellow that Jurgen Klopp withdrew him at the break.

Makkelie had long grown tired of Atletico’s usual histrionics by then. The official UEFA line is that Felipe was shown a straight red for violent conduct, treading on the heel on Mane as the Liverpool forward sought to launch a counter-attack from well within his own half. That might have been the case but Felipe’s contrived attempts to ignore the official and escape punishment meant the eventual sending-off came across as an ostensibly calm parent suddenly losing patience with a child, confiscating their electronic devices and sending them to bed without dessert. Felipe would have known the consequences of his actions but he made the mistake of expecting a warning before discipline was doled out.

That red would ordinarily have ended the game as a contest but the truth is that only one team ever seemed likely to win. Liverpool had a two-goal lead within 13 minutes in Madrid but squandered that by half-time. A fortnight later, Diogo Jota and Mane put them 2-0 up by the 21st minute, with Atletico made to wait until the 25th for their first shot and 40 more for their second, so effortlessly did Liverpool learn from their recent mistakes and exert control.

Heads were thoroughly lost by Atletico and even Diego Simeone seemed to feel his players had gone too far in their quest to force some needle into this European haystack. Atletico laid the typical traps. Liverpool avoided them. Atletico played their tricks. Liverpool defended against the dark arts. Atletico hastily constructed their trademark shithouse. Liverpool blew it to pieces.

Fabinho was phenomenal, helping the Reds pen their visitors in. Trent Alexander-Arnold was excellent, assisting two wonderful goals. Kostas Tsimikas was even better on the other side in the absence of Andy Robertson. Jota has mastered the art of inexplicably strolling into the box for unmarked headers, scoring one of the three such chances he was handed. Mo Salah had one of those evenings that feeds the stereotype of his apparent selfishness, having more shots than any player – often when better placed to find a teammate – in his desire to maximise the humiliation.

Alex Oxlade-Chamberlain, Divock Origi, Takumi Minamino, Thiago and Nathaniel Phillips all made appearances as top spot in Group B was guaranteed against the backdrop of a quite bizarre match. Atletico gave the referee a tougher time than they did Liverpool, who did well to keep their calm amid the tantrums.