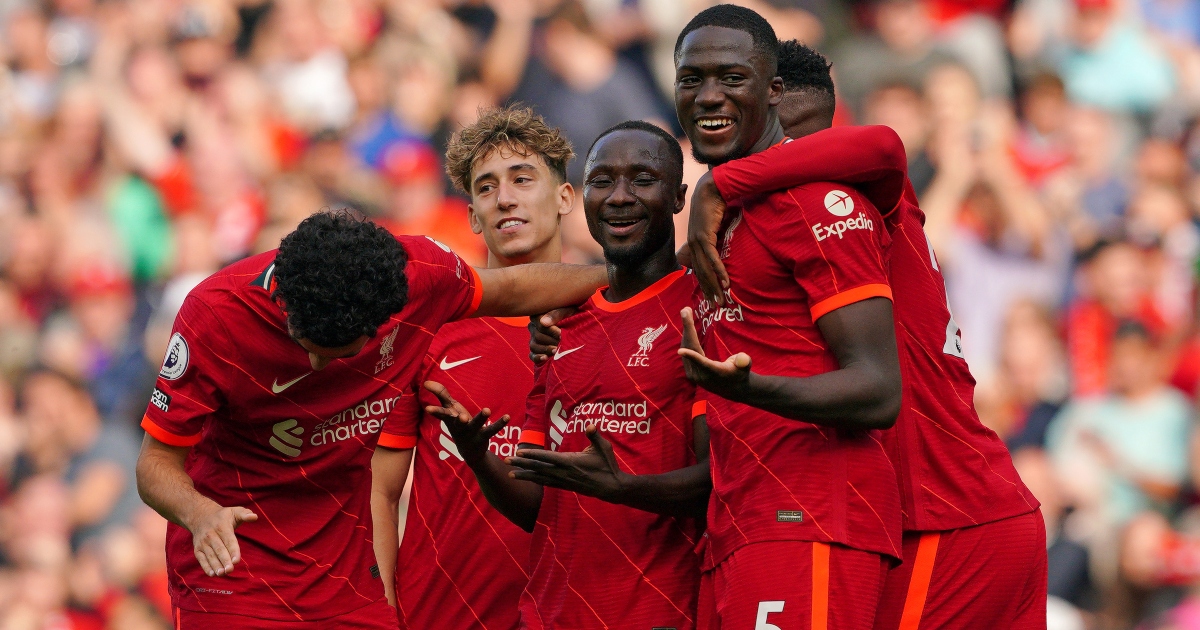 Jurgen Klopp has demonstrated Liverpool’s strength in depth this week with no deterioration in their performance. Quite the opposite, in fact…

If it is possible to put aside the season-ending injury suffered by his prodigious midfielder last weekend, then this really has been a splendid week for Jurgen Klopp.

Three wins, two clean sheets, nine goals and 21 players used. For Klopp, that last number is almost as important as the first.

After the victory at Leeds, Klopp had used 18 players, the third-fewest in the Premier League. Now, 21 players have seen action – the third-highest number in the top flight.

Harvey Elliott’s misfortune, on the back of so many long-term injuries last season, highlights the importance of rotation for Liverpool this season and Klopp has taken the opportunity this week to give some of his key players a rest while keeping primed those who he knows from bitter experience may have to come in at a moment’s notice.

Against Crystal Palace, the Reds boss changed his entire back four following the Champions League win over AC Milan on Wednesday night. Trent Alexander-Arnold was scheduled to keep his place but the right-back woke up this morning feeling under the weather and was promptly sent home by Klopp.

Despite Alexander-Arnold’s creative influence this term – no one in the Premier League had made more key passes – the 22-year-old was barely missed against a Palace side who have demonstrated plenty of stubbornness and some flashes of inspiration under Patrick Vieira.

For Alexander-Arnold, perhaps this was a good game to sit out. Wilfried Zaha generally preys upon the kind of defensive naivety the Reds’ right-back remains prone to so Klopp would have had few qualms about including James Milner, even if both the veteran’s career red cards have come against Palace, for infringements against the Palace winger.

Milner is too wily these days for a third to be a realistic prospect, and the 35-year-old’s experience was a huge asset next to debutant Ibrahima Konate. Andrew Robertson sat this one out too, making this the first game since December 2018 that Klopp had gone into a Premier League match with neither of his first-choice full-backs.

Johnny Nic: Here’s to the Mersey Mackem making a mug of Fergie

There was a similar novelty to Klopp’s midfield selection. Fabinho, Jordan Henderson and Thiago would be viewed by many as Klopp’s strongest possible trio to man the Anfield engine room but this victory was only the second time the Reds have started with all three in midfield.

With familiarity in short supply, a sketchy start was perhaps to be expected, but it was the ever-present goalkeeper who erred early on. Mercifully for the Merseysiders, Allison recovered to divert the ball onto the post and deny Zaha a second-minute opener.

Konate, in his first appearance since his £36million move from RB Leipzig, demonstrated some understandable early nerves but the centre-back settled as did the Reds by the half hour. Klopp used 20 different centre-back partnerships last season but Konate’s presence alongside Virgil Van Dijk was the first time this season Joel Matip hasn’t featured in the Premier League.

Matip lined up alongside Joe Gomez against AC Milan, with Gomez on the left. With each having suffered long-term injuries last term, Klopp is keen to ease both back in to regular action, but Gomez’s shift in midweek also indicates the manager’s desire to have two players well-versed in each position. Being able to satisfy both requirements without a dip in efficacy at the back will satisfy Klopp as much as any other facet of a hugely-satisfying week.

There were plenty of other positives for Liverpool too while moving to the top of the Premier League table.

Sadio Mane scored his 100th Liverpool goal to open the scoring, a feat achieved in 224 matches. Perhaps it was inevitable Mane would score today – 10 per cent of his Reds goals have come against Palace, with this the ninth consecutive game the Senegal star has bagged against the Eagles.

Last week’s centurion Mo Salah moved to 101 Premier League goals with a perfectly-timed volley just as Palace were beginning once more to build up a head of steam. And to add a flourish to the scoreline, Naby Keita notched his first goal in 14 months with a stunning volley in the late stages.

Keita was on the pitch because Thiago had to be replaced, with the Spaniard’s knock the only sour note of a serene afternoon for Klopp. Having been afforded so few of those last season, the novelty won’t escape the Reds boss.