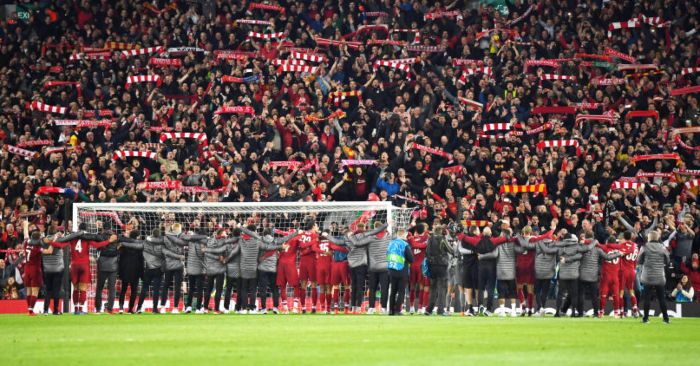 It was a troublesome delivery that Andy Robertson greeted with the straightest of bats. He offered a slight smirk as the teary-eyed reporter said “we know how magical nights can be here at Anfield” before calling on years of media training to turn nostalgia into neutrality.

“They make a huge impact and a huge difference for us,” the left-back said of the home support. “But it’s something that us as players, and especially the fans, can’t take for granted. We can’t just show up and think the Anfield crowd is going to get us through, or they can’t think it’s going to be noisy so they don’t need to take part or whatever.”

Robertson will know the power of the stadium more than most; his only defeat at Anfield came in September 2016 when his Hull side were beaten 5-1.

But the message was pertinent. Liverpool cannot afford complacency on Wednesday evening. They must not welcome Atletico Madrid fuelled only by hopes, dreams, history and a sense of great injustice. They have won a record 22 consecutive Premier League games at home but that counts for little now. The Anfield wave alone will not carry them to safety when Diego Simeone is the iceberg placed craftily in the path of their Titanic.

It is a mistake they have made before. “On European nights it’s different,” said Rafael Benitez almost 14 years ago to the day. “It is a special crowd. Benfica has a lot of experience and the crowd is not something they will be worried about. But we have seen before how Juventus and Chelsea have a lot of experience; they still felt a big difference when they played at Anfield.”

Benfica had beaten the reigning European champions 1-0 in the first leg of their last-16 tie, but there was no sense that Liverpool’s crown was slipping ahead of the second. The Echo hyped the Anfield factor, previewing a ‘rough’ evening for their Portuguese visitors, who were ‘facing the biggest test of their careers’ – something that ‘you can never know what it’s like until you’ve been through it’.

Benfica won 2-0. Benitez praised “the best fans in the world” but regretted the lack of a “top-class performance” to reward them. Liverpool were out.

And that is one of the ugly and inevitable truths to the Anfield mystique. History, in this case, has been written by the victories: Barcelona in 2019, Manchester City in 2018, Dortmund in 2016, Chelsea in 2005, Olympiakos in 2004, St Etienne in 1977, Inter in 1965. There have been more than enough results to feed into the magic, to propagate the power of the stadium.

There is little room for the infamous sleepless European nights of Basel 2014, Braga 2011, Benfica 2006, Celta Vigo 1998, Nottingham Forest 1978 or even Atletico themselves in 2010. Try and conjure memories of any of those games and you would likely fail; they are quickly subsumed by the successes, consigned to a forgotten past.

Few clubs have experienced quite as many continental highs as Liverpool, particularly at home. The romance, the reputation, the allure, it all exists for a reason. It has not been manufactured from nothing.

But they have suffered more than their fair share of setbacks. Robertson, his manager, his teammates and the fans realise there is as much a precedent for failure on Wednesday evening as there is for another chapter to be added to the Anfield anthology. They know that if they take Atletico lightly, the consequences will weigh heavy.