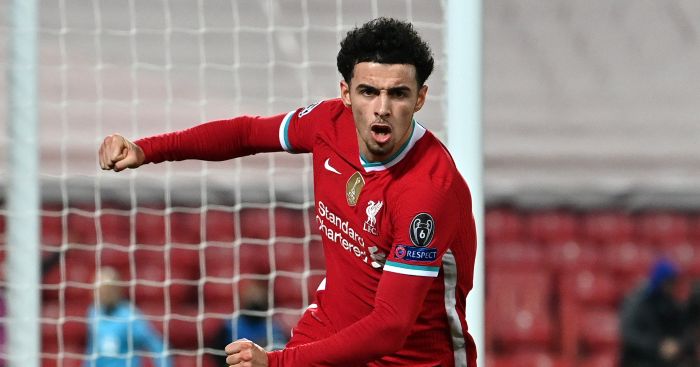 It was entirely unremarkable for the most part. Alex Oxlade-Chamberlain and Naby Keita scored to provide something vaguely different before Mo Salah added his customary goal, each strike coming ten minutes after the previous one. But Liverpool prevented Bournemouth from having a single shot on target at home as they ambled to a seventh straight Premier League victory of what would eventually amount to a record-equalling 18. This was standard fare.

Few realised then just how important a game it might have been. With 14 minutes remaining on the south coast, Jurgen Klopp proved two things: he is actually capable of substituting Andy Robertson; and he sees Curtis Jones as a valuable member of his first team.

That was in December 2019. The midfielder had as uncomplicated a league debut as one might expect with a three-goal lead and quarter of an hour to play against a team that would go on to suffer relegation. All 15 of his passes found their target. His one shot went narrowly wide. Only five players had more touches.

“It was his third time in the squad, so then I thought it makes sense to bring him on,” was Klopp’s assessment exactly a year ago. “But it was not a present, I have to say. It’s his development. We want to show respect for that and we appreciate that.”

There was little need for the clarification. Klopp has given Premier League debuts to just four players younger than Jones but Ben Woodburn, Trent Alexander-Arnold and Rafa Camacho were all stoppage-time substitutions, while Sheyi Ojo had three minutes to impress on his bow. Each were ceremonial introductions for players who would experience vastly contrasting careers at Anfield. Jones was different from the start and treated precisely as such: with a proper opportunity in a central position, not a few seconds out wide for show.

It’s cool that Curtis Jones can just play 90 mins in basically any game and it’s fine.

The manager’s admiration has not dimmed in the 12 months since. On Tuesday, Klopp paid tribute to the five younger players Liverpool “would have been lost” without this season. He listed Rhys Williams, Nat Phillips, Neco Williams and Caoimhin Kelleher. Jones was an obvious inclusion – younger than both Phillips and Kelleher; four days and two-and-a-half months older than Rhys and Neco Williams respectively – but it still felt somewhat harsh to group him in with the inexperienced youth products whose chances have only come about due to injury.

This is not someone who almost left in the summer, nor a player who could easily spend next season on loan in the Championship or lower reaches of the Premier League. This is a cocky talent who knows his increasing game time is a reflection of his quality, “not a present”. If anything, Jones has been a gift for Klopp.

The danger is that his seamless rise into the first team of one of the best sides in Europe, under one of the world’s most demanding and meticulous managers, becomes underestimated and overlooked. It is not normal for someone who does not exit his teenage years for almost two more months to look so at ease on this stage.

Jones, with that goal against Ajax, has granted Klopp the possibility he so craves: to rest players against FC Midtjylland in Wednesday’s dead rubber. It might be that his importance is underlined further as he sits the game out to keep him fresh for the real challenges that lie ahead. Liverpool have finally found a player whose career starts at Bournemouth rather than ending there.