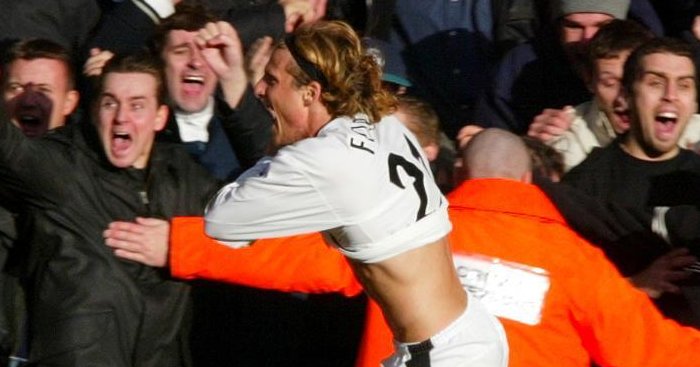 Premier League leaders Manchester United and reigning champions Liverpool meet on Sunday afternoon in an unexpected title clash. It seems like an age ago since England’s two most successful clubs fought for top spot in the same season, so here’s a team made up from players who stood out in games where the Reds and the Red Devils were both battling to lift the Premier League trophy.

Goalkeeper: Edwin van der Sar
Liverpool went into the 2007/08 season looking to build on their third-place finish from the previous campaign. Rafa Benitez’s men went 14 games undefeated in the league from August until early December and seemed to be in the thick of a title race with Manchester United. Edwin van der Sar kept a clean sheet against the Reds at Anfield as Sir Alex Ferguson’s side won by a goal to nil and the Dutchman was on top form again in the reverse fixture at Old Trafford, with the Red Devils winning 3-0. Those two games were rare defeats for Liverpool in a season that saw them lose just four times on their way to fourth place, whilst United completed a Premier League and Champions League double. If you fancy a goalkeeper challenge, try naming the former Middlesbrough keeper who started his career at Manchester United and was also briefly on the books at Liverpool in his veteran years.

Centre-back: Gary Pallister
Going into the last few games of the 1996/97 season, just two points separated Manchester United and Liverpool at the top of the table before the sides clashed at Anfield. Gary Pallister was the unlikely hero, heading home twice in the first half as the Liverpool defence failed to deal with David Beckham’s corners. Andy Cole added another in the second half after some great play by Gary Neville on the right, ensuring United took all three points as well a strong advantage in the race for top spot. The Red Devils drew their next three games but it proved to be enough for first place, whilst Liverpool finished level on points with fellow title-chasers Arsenal and Newcastle United.

Centre-back: Ronny Johnsen
Liverpool’s defence struggled with Beckham’s corners yet again the following season, with Norwegian defender Ronny Johnsen left free to head the Red Devils in front at Old Trafford in April ’98. Third-placed Liverpool required all three points to have any hope of catching United and Arsenal but Johnsen’s goal left them needing something special. Young England debutant Michael Owen proved he was the man for the job after racing past the home side’s backline before cheekily dinking the ball over the onrushing Peter Schmeichel. However, the threat of Owen was extinguished just moments later after the teenager lunged in on Johnsen and received his marching orders. The game finished 1-1 but the dropped points proved costly for Ferguson’s team, with Arsenal making the most of their games in hand to win their first title under Arsene Wenger.

Centre-back: Rio Ferdinand
Third-placed Liverpool and second-placed Manchester United met at Old Trafford in the January of the 2005/06 season, with both teams looking to try and cut the gap to leaders Chelsea. A tense match was won in the last minute as Rio Ferdinand headed in a Ryan Giggs free-kick to send the home fans – and Gary Neville – wild. The two sides continued to push each other for the remainder of the campaign and finished just one point apart, but neither team could oust Jose Mourinho’s men from top spot.

Right-wing: James Milner
A forgotten title challenge from Liverpool in the 2016/17 season saw Jurgen Klopp make strides in his first full campaign as boss at Anfield, after finishing 8th the previous year. The German’s side visited Old Trafford in mid-January, with both teams hoping to make up ground on leaders Chelsea. The ever-reliable James Milner converted a penalty in the first half after the ever-controversial Paul Pogba had knocked a corner away with his hand in the box. It looked to have been the boost Liverpool desperately needed to keep pace at the top but Swedish sensation Zlatan Ibrahimovic equalised late in the match to deny Klopp all three points. A dismal run of form after the game saw the Reds’ title hopes fade while the Red Devils also toiled in the league, perpetually stuck in 6th.

Central midfield: Juan Mata
In March 2015, Manchester United and Liverpool were playing catch-up to Chelsea once again. Juan Mata opened the scoring for the Red Devils at Anfield, giving his team the advantage at half-time. Brendan Rodgers attempted to turn the game around and sent on Steven Gerrard after the break in what would be the legendary captain’s final appearance in the fixture. However, it proved to be a fleeting farewell for Gerrard, who was sent off after less than a minute on the pitch following a stamp on Ander Herrera. Louis van Gaal’s side soon made the most of the extra man, with Mata acrobatically doubling his tally. The match finished 2-1 to United but a three-game losing streak a few weeks later left them in 4th, whilst Liverpool’s total of eight points from eight games resulted in 6th.

Central midfield: Steven Gerrard
Gerrard had a much better time in the clash between the two sides in the 2008/09 season, with the rivals meeting at Old Trafford in March. Tensions were high after Benitez’s infamous facts rant against Mr. Ferguson and the Spanish manager desperately needed a win with Liverpool seven points behind leaders United in the table, despite previously sitting atop the pile themselves in January. Cristiano Ronaldo put the Red Devils ahead with a penalty before Fernando Torres gave the away side some hope after beating Nemanja Vidic and sliding the ball past Van der Sar. Gerrard put his team up just before half-time by winning and converting a penalty before getting fouled again in the second half in a challenge that saw Vidic sent off. Fabio Aurelio scored the resulting free-kick and Andrea Dossena rubbed salt into United’s wounds with a sublime finish in added time. Liverpool continued their fine form, winning all but one of their remaining nine games. However, Ferguson’s side picked up exactly the same number of points from their fixtures and won the Premier League again.

Central midfield: Danny Murphy
Having scored a superb free-kick past Fabien Barthez at Old Trafford in the 2000/01 season, Danny Murphy tormented Ferguson’s men again in the corresponding fixture the following campaign. Despite winning three cups in 2001, Liverpool failed to challenge at the top end of the Premier League, but Murphy’s late goal against Manchester United in January 2002 left them just two points behind the table-topping Red Devils. However, both teams ended up empty-handed after 38 games, with Wenger’s Arsenal finishing the season in 1st.

Left-wing: Patrik Berger
In March 2000, Leeds United, Chelsea, Arsenal and Liverpool were all attempting to hunt down reigning champions Manchester United. Gerrard Houllier’s men visited Old Trafford at the start of the month, desperately needing all three points to have any chance of catching the Red Devils. Patrik Berger’s thumping long-range free-kick gave them the advantage and seemingly opened up the title race, but Ole Gunnar Solskjaer tucked in an equaliser late on to make it 1-1. Despite having chances to win the game, Liverpool had to settle for a draw that ended their hopes of a maiden Premier League triumph, while United won all of their remaining 11 games to emphatically retain their crown.

Striker: Diego Forlan
Manchester United’s inconsistent form at the start of the 2002/03 season left them playing catch-up as Premier League holders Arsenal led the way. Liverpool sat in 2nd and had a five-point lead over the Red Devils going into their match at Anfield. A Jerzy Dudek howler in the second half left Diego Forlan with an empty net to open the scoring before the Uruguayan struck again a few minutes later to stun the home supporters. A big three points for United was followed up by another victory against the Gunners a week later and Ferguson’s side later went on an 18-match unbeaten streak to hold the Premier League trophy aloft once again in one of club’s finest title triumphs. Liverpool failed to win any of their following seven matches and ended up in 5th.

Striker: Robbie Fowler
Back in the 1995/96 campaign, Liverpool and Manchester United both struggled to keep up with Kevin Keegan’s entertaining Newcastle United side, with the free-scoring Magpies flying high at the top of the table for a large portion of the season. Both teams needed all three points to stay in the title race when the two giants faced off at Anfield and Robbie Fowler proved to be the difference maker in a 2-0 win for Roy Evans’ men. The Merseyside-born striker beat Schmeichel twice, with the Danish hero producing some fine stops to prevent an Anfield embarrassment for the Red Devils. But Ferguson had the last laugh, inspiring his team to chip away at Newcastle’s lead and eventually overtake them to win the league by four points. Liverpool finished in 3rd, despite their thrilling 4-3 win over the Magpies in April.