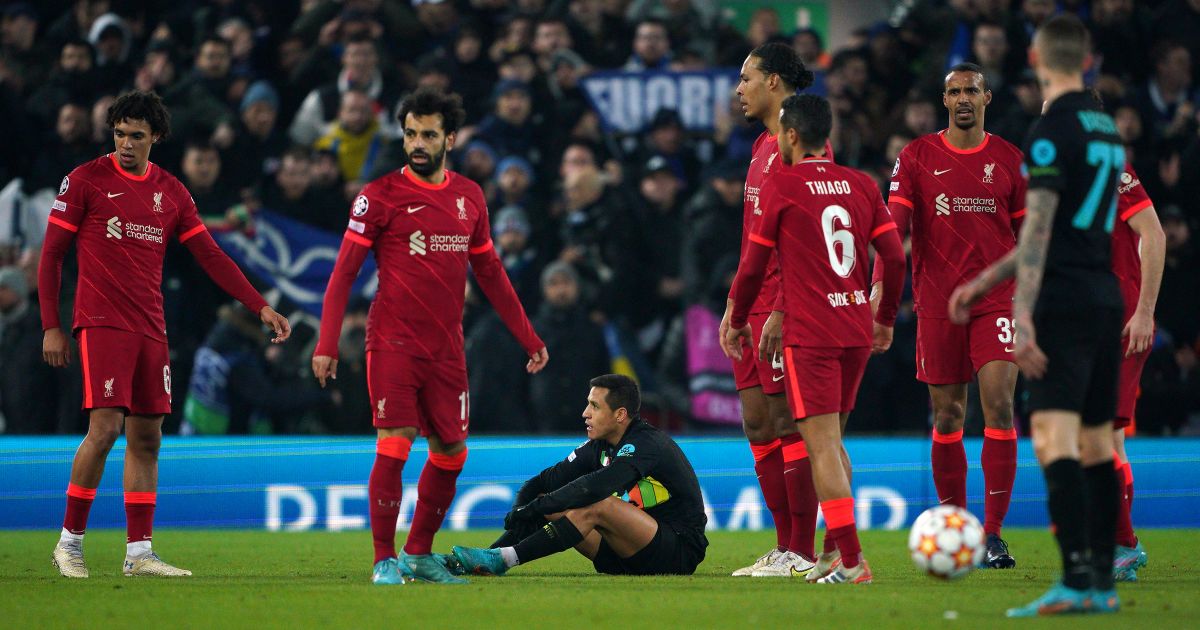 Such is Liverpool’s current form, even when they lose they win.

On a surprisingly frantic and riotously entertaining night, Inter gave Jurgen Klopp’s side a rare old scare with a 1-0 win that torpedoed Liverpool’s year-long unbeaten run at Anfield but came up short of derailing The Quadruple Bid altogether.

For Liverpool a sigh of relief after a night on which Joel Matip rattled the bar with a first-half header and Mo Salah thudded shots against both posts after the break threatened to get very silly indeed in the roughly 30-second period between Lautaro Martinez’s improbable thriker and Alexis Sanchez getting himself sent off.

For Inter, clearly, pride in the performance on the night and over the two legs will be tempered by a huge dose of the what ifs. The first leg could easily have ended differently but a 2-0 deficit was always likely to be a step too far despite this wholehearted and spirited effort.

The red card for Sanchez was particularly tough to take, although he could have no complaint after leaving an imprint of his studs on a second Liverpool shin. Coming so soon after Inter finally got the goal they’d threatened for 150 minutes will be an endless source of frustration, but there can be no complaints from neutrals about the entertainment served up on what had the potential to be a largely uninteresting and flat European night.

Liverpool played well enough and with better finishing could have avoided any of the late stress they had to go through but nevertheless carried the air of a side caught between giving it their all and trying to cruise through in second gear protecting the enviable position they’d earned for themselves a fortnight ago in Milan. Given what Liverpool are trying to achieve this season – even if Jurgen Klopp still refuses to say it out loud for fear of it sounding just too ridiculous – it’s understandable. There won’t be many – if any – more occasions this season where Liverpool have the margin for error they enjoyed tonight. Liverpool are now 19 games from history and might not get away with losing a single one of them. As we’ve noted before, Quadruples don’t actually happen and it’s because it’s really, really difficult.

In the end, that margin of error was needed. Inter had been excellent, Arturo Vidal dominating midfield and Sanchez busily justifying his inclusion ahead of the more one-dimensional Edin Dzeko as Liverpool found themselves stretched. There were still few serious threats on Alisson’s goal, though, until Martinez lashed home that stunning opener. Sanchez then spoiled his and Inter’s night, foolishly leaving his boot in to follow through on Fabinho’s shinbone.

At this point, Liverpool’s plans crystallised and they went in full-blooded pursuit of a goal to kill off the tie a second time and came close repeatedly. Vidal cemented his man-of-the-match credentials with an absurd last-ditch block to deny Luis Diaz a seemingly certain goal but then added his own “what if?” moment to the pile. Handed the chance in the final minute of stoppage to swing a free-kick into Liverpool’s box, Vidal managed to put the ball behind every single onrushing Inter player after Samar Handanovic had made it as far as the centre circle before inexplicably being sent back to his goal.

That was Inter’s final chance of making the improbable possible. For Liverpool, the idle dreams of pulling off their own wildly improbable objective remains very much alive.