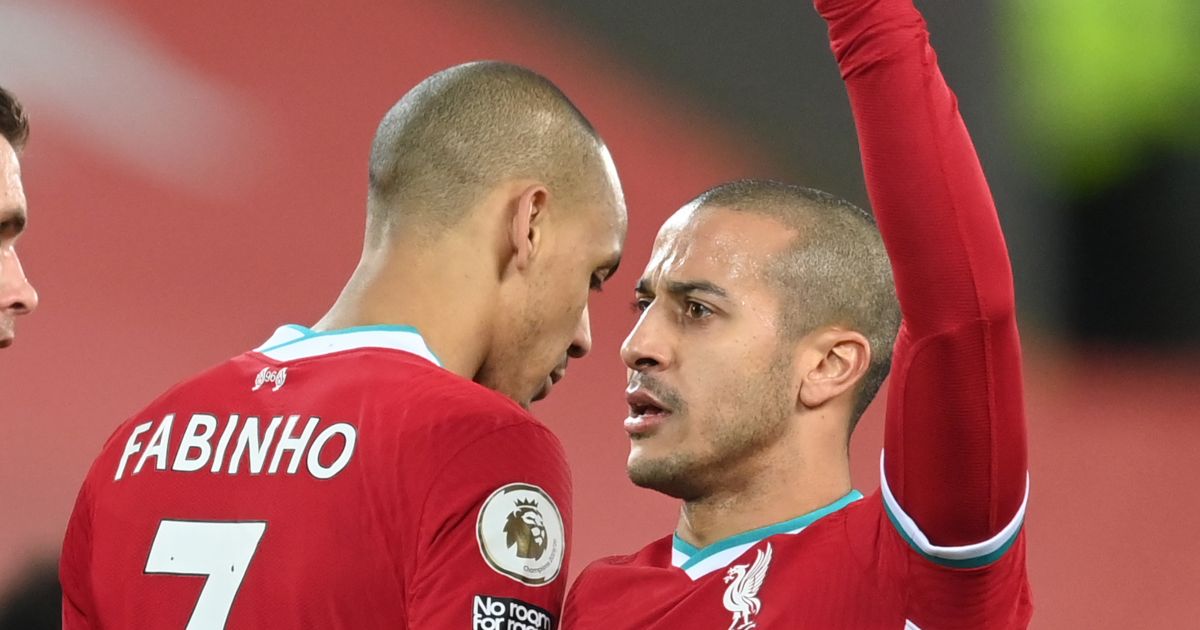 It would retrospectively become the most important game of the season for Liverpool, if not the Premier League as a whole. Their 2-2 draw with Everton in October shaped the campaign to come as Virgil van Dijk’s 11th-minute injury was the first threat to Anfield’s previously impenetrable house of cards.

Jurgen Klopp has spent the subsequent months shuffling his pack in search of balance and brilliance. Eight different central defenders have started at least one game, resulting in 18 unique pairings. And that is behind a central midfield that has had 11 individual starters, from Klopp’s “most consistent” Georginio Wijnaldum to the teenage Leighton Clarkson.

It is that constant restructuring that has starved Liverpool of perhaps their most potent partnership. Thiago and Fabinho have shared a pitch together in central midfield for only 90 minutes so far: that Everton stalemate in which the former was named man of the match.

Thiago had the most touches (99), dribbles (4) and interceptions (2) of any player. His pass accuracy (92.4%) was the highest of those that featured for half an hour or more. A no-look pre-assist for the Jordan Henderson stoppage-time winner that would eventually be disallowed was a little too brand-aware, if anything.

It remains perhaps his best Liverpool performance yet, facilitated in no small part by Fabinho’s role as elite spoiler with a match-leading six tackles. The Brazilian has not been deployed in midfield since. The opportunity has simply not been there.

But Klopp realises that the potential reward of restoring a fit Fabinho to his more natural role now outweighs the risk of moving him away from a defence with more alternatives.

“If we can find a way to bring Fab back in midfield, in some games that will be quite helpful,” he said in midweek. “It’s good, it gives us options in different moments.”

The visit of Chelsea on Thursday could be the best moment to explore them. Liverpool did what was necessary to stem the bleeding against Sheffield United but it will require much more than a victory by fine margins against the bottom club to stitch a run of form together. Facing a side unbeaten in nine games since their new manager’s appointment will either sharpen Liverpool’s focus or re-establish those home discomforts that has seen them go without a win at Anfield since December 16.

Thomas Tuchel discovered a dynamic midfield alliance of his own against Manchester United. Mateo Kovacic and N’Golo Kante were an effective collaboration yet Thiago and Fabinho could be enough to rival them and any other partnership the league – the world – has to offer. They can bring the balance between artistry and assurance that has been so lacking.

That will be needed against Chelsea, who have averaged 67.3% possession under Tuchel. Liverpool need to be patient during longer periods than usual without the ball and must use it well when they have it. There will be no repeat of their last meeting in September when Thiago still had that record-breaking lustre.

His aura, much as Liverpool’s, has dissipated since. Pushing Fabinho alongside him seems too straightforward a fix, but often the obvious – and until now almost never available – answer is the right one.