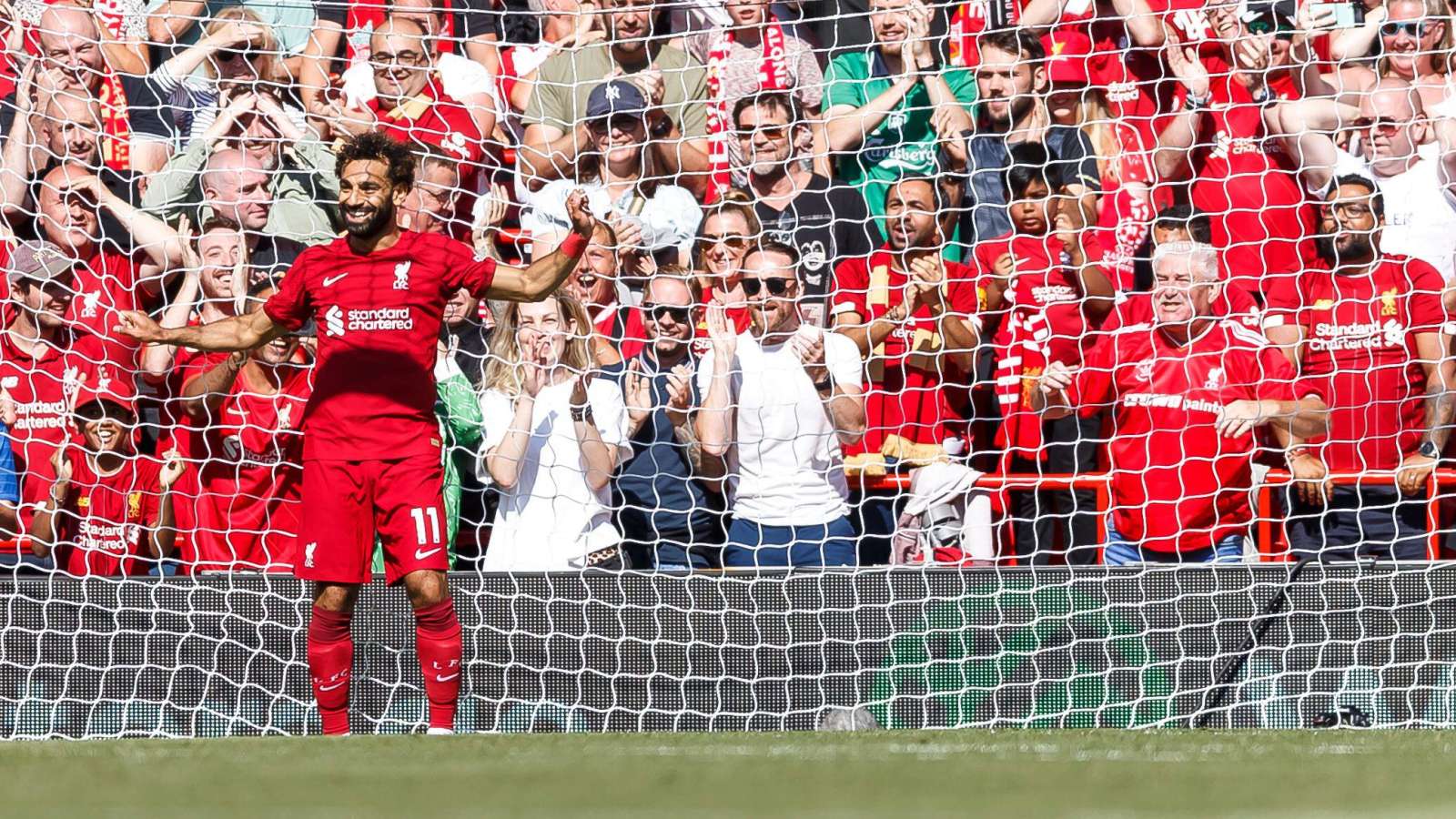 Be honest, Liverpool fans. You’re a teensy bit miffed not to get 10 there aren’t you? And what exactly does the goalless Mo Salah make of it all? It’s a very different kind of crisis for the Reds…

Sometimes it’s really easy to pick a game to write about on a Saturday afternoon. Often the 3pm fixtures offer a conspicuous standout that looks absolutely certain to provide all the narrative and excitement you can eat.

On other Saturdays, though, that can be a much harder task. You look down the list and it’s just all narrative out the wazoo. Today, there was a case for literally every game being worth 800 words of half-thought-through nonsense.

Manchester City against an exciting Crystal Palace side with a history of exposing Pep’s baldness? Could definitely write about that. Chelsea and their increasingly unpredictable manager against struggling Leicester? Even without the Fofana subplot, that one had plenty of potential.

Brighton and Leeds playing for the chance to sit top of the table… for two hours. Definitely, as long as you write quickly enough.

Brentford against Everton? Juicy. We all know what happened in Brentford’s last home game and Everton are Everton. Bound to be plenty to go at there.

Could have picked any one of those. All good options. But it had to be Liverpool against Bournemouth, didn’t it? Liverpool without a win in their first three games? If they don’t beat Bournemouth you can absolutely steam into a beard-stroking “Is this the end for Klopp’s great Liverpool side?” thinkpiece. And there’s always more bang for your buck in writing about Liverpool.

Bound to be a good game to write about. See if Liverpool can get back to winning wa… Oh, it’s already 2-0. For fu… Fine, we’re committed to this now. Let’s stick with it.

By half-time when Liverpool lead 5-0 while Manchester City are 2-0 down to Palace and Chelsea are down to 10 men against Leicester you really do start to think you may have made a bit of an error.

And they bloody didn’t. Absolute frauds. They could only score four second-half goals – the same, incidentally, as City managed – and end up with only a Premier League record-equalling 9-0 win and the first not against Southampton for over 27 years.

There were two standout things about this. First was that there will be a small but undeniable part of every Liverpool supporter’s brain that therefore leaves this game feeling slightly disappointed. There were five minutes plus four minutes of stoppage time still to go when the ninth goal went in. Given everything, you’d have made a 10th just about odds-on at that point.

A fundamental yet understandable weirdness of the sports fan’s brain is that this 9-0 win therefore feels ever so slightly more disappointing than a more routine 6-0 drubbing would have. In a way. Because sport is about taking opportunities even if they are not opportunities you ever expected to get on any particular day.

The second funny thing about it is that Mo Salah managed not a single goal or even an assist in a 9-0 home win. We’re not having a go, it’s just… that’s funny, isn’t it? He should have scored early on – I say early on, it was already 2-0 at the time – but he tried to manufacture a left-footed shot when any kind of contact from his swinger would surely have got the job done from close range. And he had other chances, too. Once it got to about 7-0 it seemed inevitable that Salah was surely about to score the most “got in on the act” goal in recorded history. But no.

Instead it was left to Roberto Firmino to most conspicuously pad those stats – Darwin Nunez, you damn fool – with a couple of goals and a trio of assists. The experienced Brazilian showed particular nous in bagging assists for the long-rangers. That’s how you do it, Mo, who will no doubt incur the wrath of countless thousands of Fantasy Football players who made him rather than Erling Haaland their captain today.

Luis Diaz got himself a couple of goals as well, while Harvey Elliott and Fabio Carvalho’s were perhaps the most noteworthy.

But really, what useful thing can you say about a game like that? As anyone who’s already made it through the 600 words so far can attest, pretty much nothing. Liverpool were brilliant, obviously, and just as obviously Bournemouth were irretrievably and unnecessarily awful. What you would say is that Liverpool deserve particular credit not just for the obvious excellence of their football but for the way they continued to push for goals long after it was necessary; in this of all seasons you could be more forgiving than ever for just coasting through a goalless second half as so often happens after that kind of opening 45 minutes.

The most startling thing was not even the nine goals but the sheer number of chances. Again, that sounds like a really obvious point but whatever else may have been freakish about this game, the chance conversion rate wasn’t particularly up there. This wasn’t just a day when everything went in for Liverpool. You often hear “that could have been seven or eight” but this genuinely felt like it could have been 12 or 13. Again, a missed opportunity for the Reds. Start rueing!

It’s a better crisis than three games without a win, anyway.

For Bournemouth the challenge is quite obviously to just find a way to write this off. But the concern is that you could already see the scarring from their previous two games. That’s got to change now. To misuse the old away-goals-based cliche from two-legged ties back in the good old days, their task hasn’t really changed. But only if they can memory-hole this defeat rather better than they managed far less humiliating scorelines (if not performances) against City and Arsenal.

Bournemouth’s rivals will pretty much all lose to City, Arsenal and Liverpool as well. Those results should never be the ones that define their season. Except now, by losing them all so horrifically and so early, the danger is that they actually might.