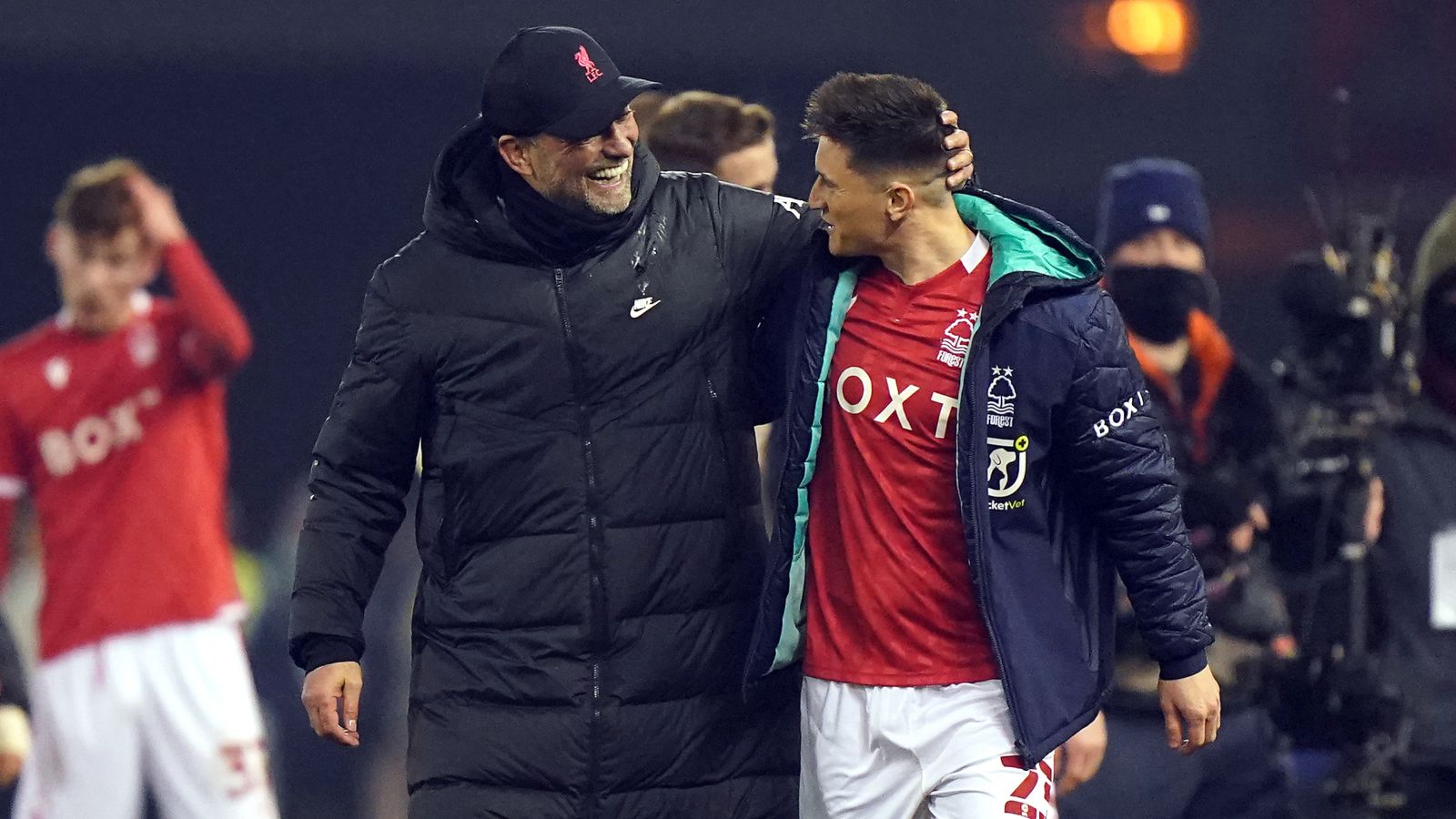 Nottingham Forest were excellent and proved why many of these faces are Premier League-bound one way or another. But Liverpool are Liverpool.

If this isn’t a Premier League fixture for the first time this millennium next season, then Liverpool will at the very least have to grow accustomed to many of their hosts.

Djed Spence was not at his usual best in a defence modified into a back four due to injury, but he greeted the occasion and opponent with enthusiasm instead of apprehension and had some bright moments. Middlesbrough will be fielding many an enquiry this summer.

Joe Worrall was tremendous, making one perfect tackle on Diogo Jota when the Portuguese was played through in the first half, then breathing that air of confidence throughout. There are considerably worse centre-halves in the division above the 25-year-old.

James Garner, albeit on limited evidence, was able to suggest he might currently be Manchester United’s best midfielder.

Garner has done enough this season at Forest to deserve a pre-season chance at United. Has done very well against various PL teams in the cup.

Brennan Johnson was the best forward for either side, the crossing architect of two fine chances and the archetypal hard-working modern attacker.

The man tying it all together will have his time in the top flight sun soon enough, too. Steve Cooper has dragged Nottingham Forest to the back of a quite ludicrous Championship play-off queue but none of those ahead instil true confidence. Whether or not promotion beckons, his is a stock that should only keep rising.

Yet it was Liverpool, away from home and with a vastly different team to that which secured a remarkably similar result four days ago, who completed this year’s set of FA Cup semi-finalists. Their shot at history continues unabated.

Arsenal worried them on Wednesday, induced a genuine sense of vague anxiety in a group of players that typically seem above such nonsense. Nottingham Forest pressed in a comparably ferocious manner, their intensity unsettling the Liverpool rhythm and matched by that of the supporters.

The hosts were a perennial danger on the counter-attack, Davis occupying a space on the halfway line and rarely venturing more than a couple of yards from the impeccable Ibrahima Konate. Their battle had no real loser; both were excellent. Joe Gomez versus Johnson on Liverpool’s right was equally engaging, before the latter decided to twist and take on Kostas Tsimikas on the other side and fare even better.

It was an exceptional watch, albeit relatively lacking in chances. Jack Colback’s mistake handed one to Roberto Firmino, whose attempted lob was saved superbly by Ethan Horvath. Worrall cleared one effort off the line. Jurgen Klopp bowed to the narrative and made a quadruple substitution, reflecting his respect for the Championship resistance. Then Forest had their moment.

Johnson broke down the right, eventually gathering a ball played just behind him on the counter. He raced clear with support in the centre, putting the ball across for Philip Zinckernagel, unmarked and ten or so yards out. The Dane tried to steer it beyond Alisson but managed only to knock it clear of the far post.

Two minutes and 10 seconds later, Liverpool led. The lurking Diogo Jota converted a wondrous Tsimikas cross and it seemed as though they had done it again. The Reds opened the scoring in midweek against Arsenal almost immediately after the Gunners created and wasted their best chance in a promising display. Klopp and his players seem to have developed a way of lulling teams into a false sense of security before striking at the opportune moment.

That, of course, implies a degree of intention and deliberation, as if Liverpool plan to endure an hour of even, energy-sapping football that is pierced by the concession of a huge chance – but never a goal – before they themselves score. Good as they are, it is mere coincidence.

But there is a sense that they can do no wrong. ‘That was the one,’ Forest fans and neutrals alike fearfully declared at the Philip Zinckernagel miss. Yet even after Jota scored, Forest crammed a penalty claim, a presentable Ryan Yates header and what would have been an incredible Cafu equaliser into those final 10 minutes.

Liverpool stood firm, rocked but not toppled, bruised but not beaten. They will see many of these faces again soon enough and more regularly. It remains the case that they could be armed with an extra three trophies by then.