Home F365 Says Reds recalibrate while edging to within 15 points… 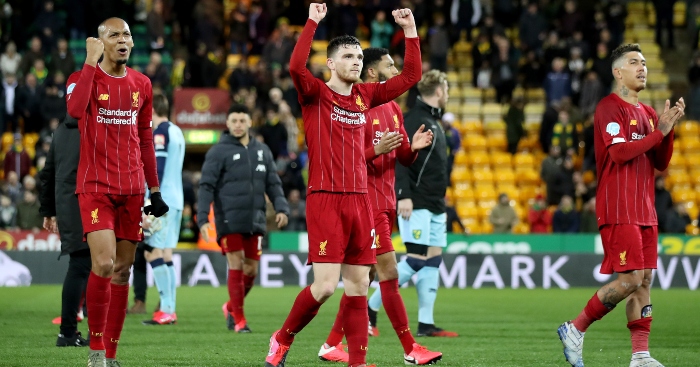 Liverpool dig out a way to win; Norwich find one to lose. Plus ça change…

The Reds removed another hurdle between them and the Premier League title, taking their target down to just 15 points. At this rate, Anfield will be hosting a winner’s parade before the end of March, specifically five weeks from now when Roy Hodgson returns for an ill-timed reunion with his former side.

Norwich tried to delay the inevitable, today and in the sense of Liverpool’s march to the title, but given what this season has taught us about both sides at Carrow Road, Sadio Mane‘s 70th-minute came as a surprise to absolutely no one.

That is not to besmirch the Canaries’ attempt to become the first side to topple Liverpool this term, or even the second to stop them from winning. Daniel Farke’s men, with two narrow banks of four, restricted the Reds in the first-half so much that it was they who had the best opportunity to open the scoring. They went close in the second period too when Alex Tettey struck the outside of Alisson’s post. But by then, Liverpool’s relentlessness had resumed.

It is that quality among so many others which shines brightest from this Liverpool squad. The sheer consistency that has seen Jurgen Klopp’s men go 43 games unbeaten, the last 17 of which have been victories, with 10 clean sheets in the last 11, while scoring in their last 35 matches. It is perhaps impossible to appreciate in its immediacy just what Liverpool are doing this season.

The only concern Klopp may have had before journeying across the country to Norwich was that momentum having been checked by the winter break. The Reds boss was insistent on his players having one – the same for him and his staff – with many of his players taking the opportunity to fly across the world in search of some sun-soaked rest and recuperation.

“It is insane. I don’t really understand it”

Jurgen Klopp, perhaps for the first time, reflects on Liverpool being so far clear at the top of the Premier League

It won’t have escaped Klopp that the period immediately after an unofficial winter break last season was when Liverpool’s title pursuit spluttered. After an 11-day breather at the back end of last January, the Premier League leaders drew three of their next four games in all competitions and five of their next seven, including being held by a pre-Brendan Rodgers Leicester, West Ham and a Manchester United side dropping like flies before the Reds at Old Trafford. Another draw in the Merseyside derby saw them relinquish top spot which they never regained.

Klopp would never say it publicly, or even privately other than to a very select few, but suffering a similar fate will not have been on his mind at Carrow Road. The aim here was victory, of course, but also recalibration in time for other challenges aside from their domestic charge.

The reigning kings of Europe are back in Champions League action on Tuesday when they face Atletico Madrid and this was a warm up for when they return to the Wanda Metropolitano, the scene of their sixth continental coronation.

Klopp named his strongest possible XI while considering the need to ease Mane back into action following his three-and-a-half-week lay-off. The Senegal star, along with Fabinho, was introduced on exactly the hour mark in a change that would almost certainly have taken place regardless of the scoreline.

💯 This was Sadio Mane’s 100th goal in English football.

As it was, Liverpool needed Mane to help break Norwich’s stubborn resistance. Tim Krul was excelling in front of Holland coach Ronaldo Koeman, though aside from one double save which featured a fabulous block to deny Naby Keita as its crescendo, the Canaries keeper was only being lightly tested.

Mane once again made the difference. He outmuscled Christoph Zimmerman to make a better pass of Jordan Henderson’s ball than it perhaps was before turning and giving Krul no chance with a low finish.

So another game in which Liverpool have scored, kept a clean sheet and won. Another home match which Norwich have lost by only a single goal. Not in the last three months has a game at Carrow Road been settled by more than the odd goal but only once, against a wretched Bournemouth side, have the Canaries come out on the right side of any of these tight affairs.