Home F365 Says Liverpool must resist Barcelona, with or without €100m tip 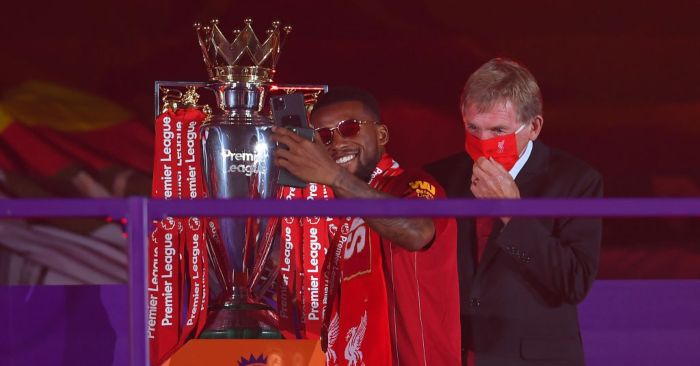 The €100m premium Barcelona had to pay for any Liverpool player has expired. But Georginio Wijnaldum really must stay.

It is, if not the worst signing ever, then certainly the most stark in terms of contrasting fortunes between the buying and selling clubs. The football food chain has rarely seemed as retrospectively absurd as when the smaller fish of Liverpool was supposedly fighting against the tide of shark-infested waters to fend off Barcelona. They were the ones who smelled a mixture of blood and desperation; prey hunted predator.

There are a multitude of ways to epitomise the sheer failure of Philippe Coutinho’s return to Catalonia in January 2018. The last two Champions League tournaments have provided an irrefutable case in point each: Liverpool’s irrepressible march past a shellshocked Barcelona and their hapless former flame last May; and Bayern Munich enlisting the Brazilian to score two goals and assist one in 15 substitute minutes a week ago against the parent club that disowned him. But perhaps the most striking was in Liverpool’s initial negotiation. And not even in how they cut off part of their nose for £142m through foresight, not spite, to conduct necessary, ruthless and remarkable surgery elsewhere at roughly the same price.

The Times described it as a ‘remarkable clause’ that Barcelona were ‘unhappy’ to include but one Michael Edwards ‘insisted’ upon. That €100m premium the Spanish club would have had to pay on top of a transfer fee for any Liverpool player expired only at the end of this last interminable campaign. And they will be eager to make up for lost time in attempting to exploit it.

Rumours of interest in Georginio Wijnaldum are as predictable as they are understandable. The appointment of former Netherlands coach Ronald Koeman, coupled with the midfielder’s uncertain long-term future, makes the Nou Camp a sensible destination. There would be consternation at a rebuild starting with a 29-year-old block bought from the same supplier that caused their previous foundations to crumble but Wijnaldum’s is precisely the sort of discipline, selflessness and personality Barca lack.

That is just a microcosm of the skill set Liverpool would be so loathe to lose. Wijnaldum has fewer career goals for the club than Ryan Babel and the last scorer he assisted in the Premier League was Danny Ings but to define him by statistics is to misinterpret his importance. Even by defensive metrics he is average at best, yet judging his efficacy on completed tackles or interceptions would be like measuring every individual ballistic vest by how many bullets it has repelled. Wijnaldum is Liverpool’s Kevlar, adding a constant layer of protection and assurance, gloriously fitted to the user, either to the untrained eye or the perceptive gaze.

Jurgen Klopp’s “perfect midfielder” is perhaps no-one else’s. This Liverpool team is built not to highlight the talents of those in the middle but to accentuate the brilliance of those on the flanks. It might forever jar with expectation that the full-backs are their main attacking force and the midfielders are asked to sacrifice themselves for that cause yet that inversion has helped Wijnaldum quietly blossom.

“He can play a few positions for us and players that come through the Dutch system usually have a good tactical understanding and flexibility,” Klopp said on the day Wijnaldum signed. James Milner is a more obvious utility man but even he has not been the centre-half in a 5-1 win one season and a blameless and tireless striker in a 3-0 Nou Camp defeat the next. He certainly made up for that first-leg setback with a goalscoring turn from the bench in the second.

Rafa Benitez once discussed the Dutchman’s “problem”: that he “can play everywhere and do well”. In the case of Koeman, he embraced having a phenomenal deep-lying shield at his disposal by turning him back into the offensive weapon he once was in the Eredivisie. Ten goals in 17 games under his Netherlands tutelage suggests another role change would be imminent and eminent at Barca.

That sort of adaptability is not particularly difficult to find in general but the level at which Wijnaldum operates is occupied by precious few. He also encapsulates one of Klopp’s main coaching strengths: identifying and harnessing the hidden excellence of those who have been so often overlooked; squeezing lumps of coal into glistening diamonds.

Liverpool would be foolish to not consider any interest in a player who turns 30 in November and is able to discuss leaving as a free agent in January. Yet there is no direct replacement for such a malleable, magnificent and misunderstood midfielder. If Wijnaldum cannot be persuaded to renew his contract in any event then his final months at Anfield must be cherished, not curtailed. Barca can and should be resisted comfortably this time, with or without a €100m tip.