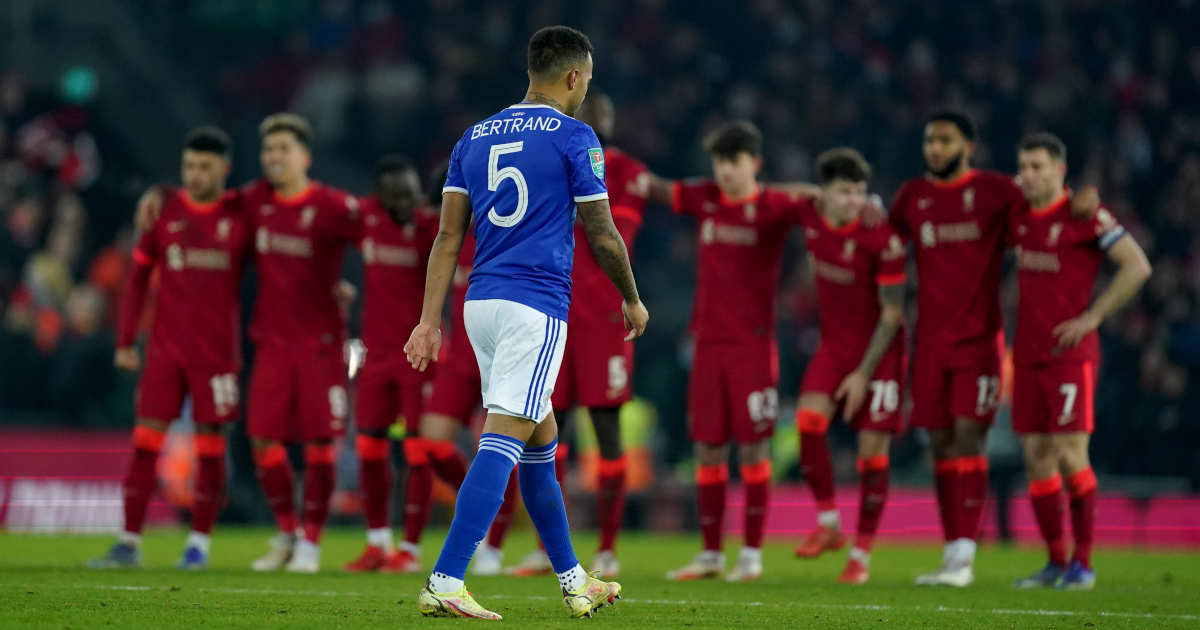 Liverpool came from two down to beat Leicester in the Carabao Cup, but post-match talk has focussed on a depressingly familiar song instead.

The fact that supporters of both Liverpool and Everton are so used to this nonsense is a shame rather than an excuse. On Wednesday night at Anfield, as Leicester City capitulated to Liverpool in the Carabao Cup, a familiar refrain filled the air. ‘Feed the Scousers, let them know it’s Christmas time’. Not for the first time in recent years, cheap, lazy and vaguely offensive stereotypes about ‘the Scousers’ rung out. Perhaps it helped to distract them from their team twice throwing a two-goal lead away.

It’s a well-worn trope, this idea that Liverpudlians are somehow more impoverished than anybody else in the country, and it’s easy to get side-tracked into the question of whether this is true. The answer to that question is, broadly, that there have been many, many studies into which areas are England’s most deprived, and that Liverpool shows on some of them, but not on others. Considering how many different metrics can be used to define deprivation or poverty, it’s probably not surprising that these lists vary somewhat. What we can say with a reasonable degree of certainty is that, while Liverpool has areas that experience appalling deprivation, it’s not uniquely deprived.

Similarly, when Liverpool supporters sing ‘fuck the Tories’ in response, they’re missing the mark a little bit, too. Like many parts of this country, in Leicestershire the true political dividing line is between urban areas and more rural areas. Rural Leicestershire is true blue, but the three parliamentary seats held in the city of Leicester itself are all Labour strongholds. Nothing in this particular exchange rings particularly true, but again, that’s not really the point.

There has long been something fundamentally cruel about the British attitude towards poverty. Not only does a certain strata of our society believe that the poor bring their poverty upon themselves, but they also believe that, rather than understanding that the levels of poverty seen in some parts of this country are a national disgrace that perhaps we should do something about, levels of inequality are mostly useful as a stick to beat the poor and, more broadly, to beat the people of towns and cities which have been designated as such.

And this particular song wasn’t an incredible moment of Leicester wit. It’s been heard repeatedly at Anfield and Goodison Park over the years. Three years ago it was Wolves supporters. Later in the same year it was Arsenal supporters. And, of course, it might even be held that this particular song is towards the polite end of the spectrum of Manchester United songs about the city. Again, we could delve in and look at the statistics. Islington in London, the home borough of Arsenal, for all its stereotyping as the home of the ‘metropolitan elite’, has grinding social issues of its own. Child poverty rates in Wolverhampton have been amongst the worst in the country. Greater Manchester has more than 600,000 people living in poverty.

Stepping away from the ‘bantz’ narrative for a moment, it’s worth remembering that supporters of clubs do a lot of good work in tackling food poverty. The independent Liverpool website This Is Anfield posted a perfect retort after the match, offering those who wished to help with ‘feeding the Scousers’ the opportunity to do exactly that by making a £5 donation to the North Liverpool Foodbank by text message. This isn’t the only drive of this nature in the city, either. Fans Supporting Foodbanks was formed in 2015 as a joint initiative between the Everton Supporters Trust and the Spirit of Shankly Liverpool supporters’ group.

And, of course, it doesn’t end there. In Manchester, the MUFC Fans’ Foodbank and MCFC Fans Foodbank Support have been collecting food on match days, while Marcus Rashford’s efforts to tackle child poverty have been well-documented. Leicester City supporters set up a foodbank collection point at the start of 2019. Wolves supporters have been involved in their club’s ‘Feed The Pack’ project, while then-manager Nuno Espirito Santo donated £250,000 towards the project. This time last year, Spurs and Arsenal supporters completed a 13-mile sponsored walk to raise money for a food bank.

None of this is about oneupmanship. The problem isn’t ‘all football supporters’, and it isn’t ‘Leicester City supporters’, ‘Manchester United supporters’, or those of any other specific club, either. And neither is it to suggest that Liverpool and Everton supporters are angels, either. All football clubs draw their support from a broad demographic, and all the more so as the Premier League has become globally popular. The issue here is poverty being used as a stick to beat somebody else; an attitude that makes it easier for politicians who seem unperturbed by sky-rocketing poverty rates in this country to continue to sit on their hands.

And, of course, it’s worth considering why we sing at football matches, and whether the songs that are sung might even fall foul of the law of unintended consequences. If songs are sung to try and affect what happens on the pitch, then it might reasonably be surmised that this particular song didn’t have the desired effect on the Leicester City team at Anfield. Leicester did, after all, lead the match by two goals twice but still contrived to lose after a penalty shootout.

It seems difficult to believe that Leicester players would be particularly motivated by hearing their supporters singing songs about Liverpool supporters being poor. If anything, it might well be that Liverpool players hearing these songs could find some inspiration from them, upping their game to shove them straight back down throats.

But in a broad sense, perhaps it’s time to just put these stupid songs behind us. It’s really not difficult to not sing a song and to do at a time when foodbank use is continuing to go through the roof, just as it has been for years, is ludicrous. Football supporters will continue to raise money to fight food poverty because it’s the right thing to do, and because some things are more important than witless ‘banter’ from which nobody really emerges with their dignity intact.