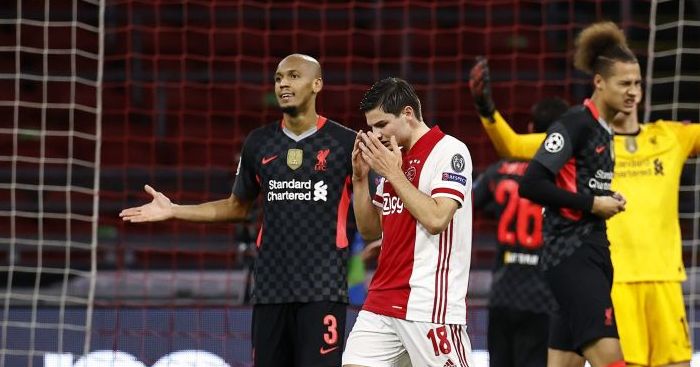 Daley Blind laid in a heap on the floor as Fabinho threw his arms up in the air. So engrossed was he in his evening objective that he heard Felix Brych’s half-time whistle and mistook it as the referee blowing for a foul. The tackle, much like almost every action Fabinho made in the first half, was perfect. The mere suggestion that he had done so much as put a foot wrong elicited an understandably bemused reaction.

It should perhaps come as no surprise that Fabinho might adapt quickly to the role of centre-half in Virgil van Dijk’s absence. Luke Shaw, Kyle Walker and Davinson Sanchez are carving out unlikely futures as auxiliary options in that position; an elite defensive midfielder with consummate timing, s and an excellent passing range is a natural fit.

So it proved in the opening 45 minutes as Fabinho was precisely the sentry Liverpool needed. Two impeccable tackles in his own area within the first quarter of an hour set the tone for a commanding performance that was capped off with a sensational goal-line clearance moments before the Blind spot.

He countered Dusan Tadic’s passes and flicks, withstood the pace and skill of David Neres and Quincy Promes and established himself as comfortably the game’s best player.

The second half brought a few forgivable imperfections. An early collision with Adrian, who seemed to struggle with communication throughout, followed a slight lack of positional awareness that allowed Davy Klaassen to strike the post from range. But these were imperceptible scratches on the paintwork by full-time. Jurgen Klopp would not have diverted too far from this script if given the chance.

There were important minutes for Curtis Jones before his half-time substitution. The teenager failed to assert himself but will be better for the experience. The midfield as a whole lacked control – Fabinho might genuinely be Liverpool’s best available option in two positions now – but soon matched Ajax for class and commitment.

Klopp will perhaps be happiest at the fact he was able to substitute Mo Salah, Roberto Firmino and Sadio Mane on the hour mark while preserving a one-goal lead built on fortune but protected through determination. Diogo Jota, Takumi Minamino and Xherdan Shaqiri had five shots, created four chances and completed four dribbles between them. That sort of reliable variation and capacity to rest players without too considerable a drop in quality will be more invaluable this season than ever.

Those final 30 minutes were Liverpool at their most ruthlessly efficient, conceding a solitary tame shot on target to substitute Lassina Traore but testing Andre Onana thrice on pulsating counter-attacks.

After the naivety and sense of injustice that underpinned their last Champions League games, this was a welcome show of maturity and authority from Liverpool on their first fanless European outing. It was not without its share of luck but Ajax, scorers of five goals in their last home game, were nullified well enough.

No away win comes easily in this competition, not least without your best goalkeeper, centre-half and central midfielder. Alisson, Van Dijk and Thiago are crucial but Liverpool had their entire spine removed and still stood tall. It helped that Fabinho essentially filled in for all of them at least once with his acrobatics on the line, assurance in the box and athleticism in the middle.

Joe Gomez was brilliant too after recent uncertainty but his new central defensive partner was the star. Fabinho showed in Amsterdam and against Chelsea that Van Dijk isn’t the only player at Liverpool who can make that job look easy.