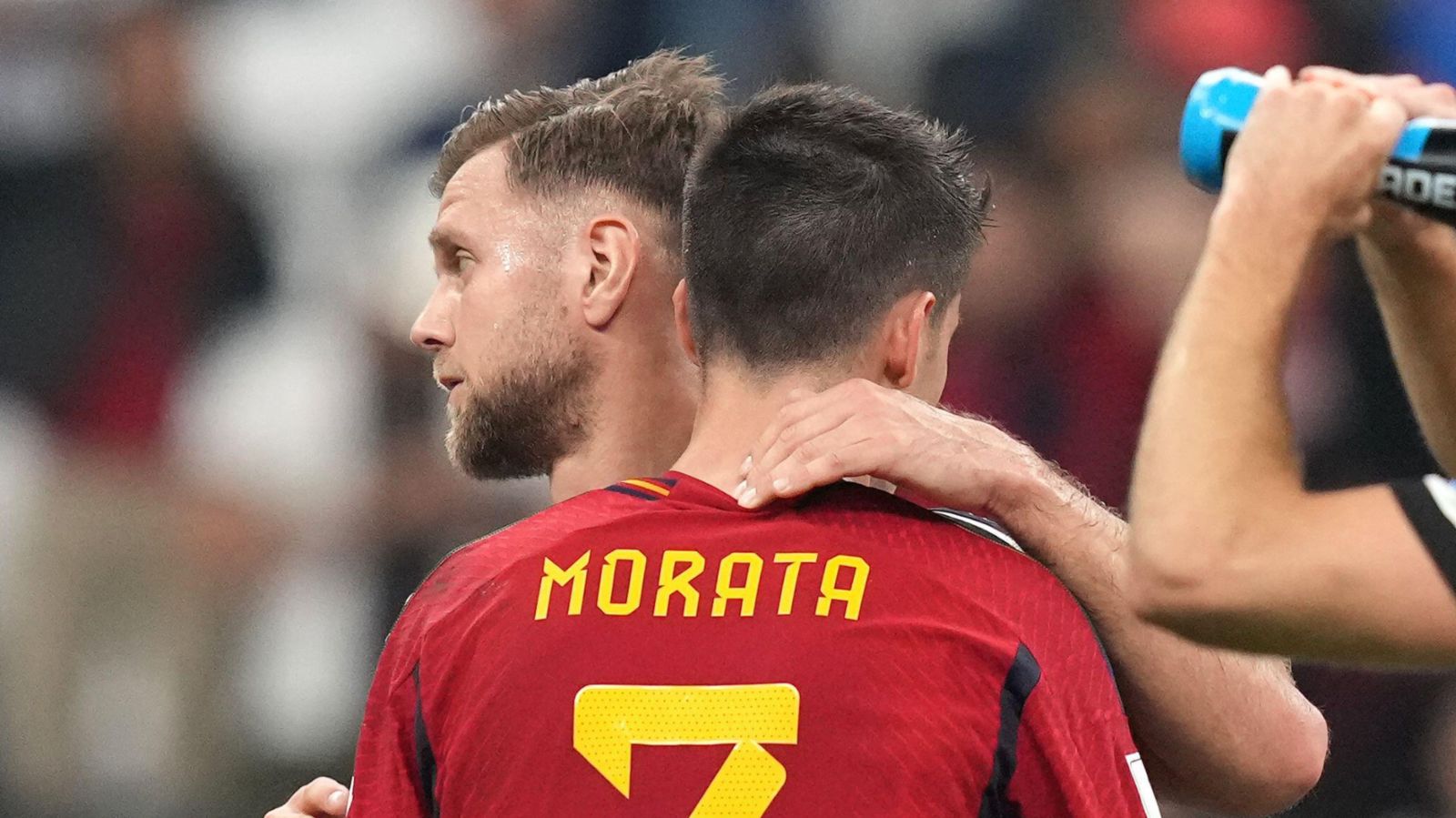 Spain and Germany played out a game of flawless imperfection as Luis Enrique and Hansi Flick proved they are the best World Cup coaches.

The meeting of the two best coaches at the 2022 World Cup, with their intricate systems, unique methods and staggering achievements, almost had to be settled by two centre-forwards at slightly different ends of the sophistication scale.

Within eight minutes of his introduction for Ferran Torres, Alvaro Morata finished a low Jordi Alba cross with a sumptuous outside-of-the-boot finish to give Spain the lead.

Nearly a quarter of an hour after coming on as part of a triple substitution roll of the German dice in response, Niclas Fullkrug collected Jamal Musiala’s clever touch, propelled any and all in his gravitational field – including his excellent teammate – and promptly attempted to remove Unai Simon’s left hand with a thunderous strike.

What came before and after those two goals marked this out as the match of the tournament so far, despite the best attempts of those steering us through in the commentary booth to denigrate it as scrappy and tetchy.

There were periods during which neither Spain nor Germany enjoyed much success in putting moves together, but that was the consequence of wonderful work from both sides out of possession. There was an energy and a level as yet unmatched in this tournament, two teams running and pressing and problem-solving in the moment like a high-end Champions League knockout tie.

The eight-goal disparity between the two teams after the opening fixtures certainly hinted at something altogether different. Spain exhaustively dismantled a Costa Rica side which recovered to beat the very same Japan who overcame Germany. This should have been a comprehensive schooling.

But tournament football is never that linear and Germany’s reaction to such a pressurised situation was admirable. Spain lost nothing by emerging from a spirited battle with scrapes, bruises and a smile either.

Both produced just enough to feel ever so slightly aggrieved at failing to win, while being content with the draw. Antonio Rudiger had a goal disallowed, Musiala ought to have made far more of one chance when put through with the option of squaring to a teammate for an open net, Leroy Sane helped change the game from the bench and Sergio Busquets was rendered far lass effective than usual.

Spain filtered their opportunities through Ferran Torres, while Dani Olmo forced an eye-catching save from Manuel Neuer and Morata showed his other side, failing to get the ball out from under his feet when clean through before Nico Schlotterbeck intervened.

Both keepers made notable mistakes playing out as everyone was pulled at least slightly into the chaos. This was imperfection at its most flawless, two teams endeavouring to win rather than simply trying not to lose.

The earlier result in Group E did help the spectacle in that sense, removing much of the jeopardy from the physical and psychological wounds Japan inflicted upon Germany on Wednesday. Hansi Flick’s side could have lost this match and still hoped to progress to the knockouts with victory over Costa Rica in their final game.

But there was more at stake against Spain, not least pride, a point to prove and perhaps even the chance to knock a rival down a peg or two. In each of those senses, Germany accomplished a mission they will hope to finish next week.

That is credit to Flick, just as Spain’s performance and continuing development is testament to Luis Enrique’s excellence. They have graced this World Cup with a coaching acumen few can match, particularly compared to how other managers have dealt with arguably better hands. Roberto Martinez at the very least should have cramp from taking notes.