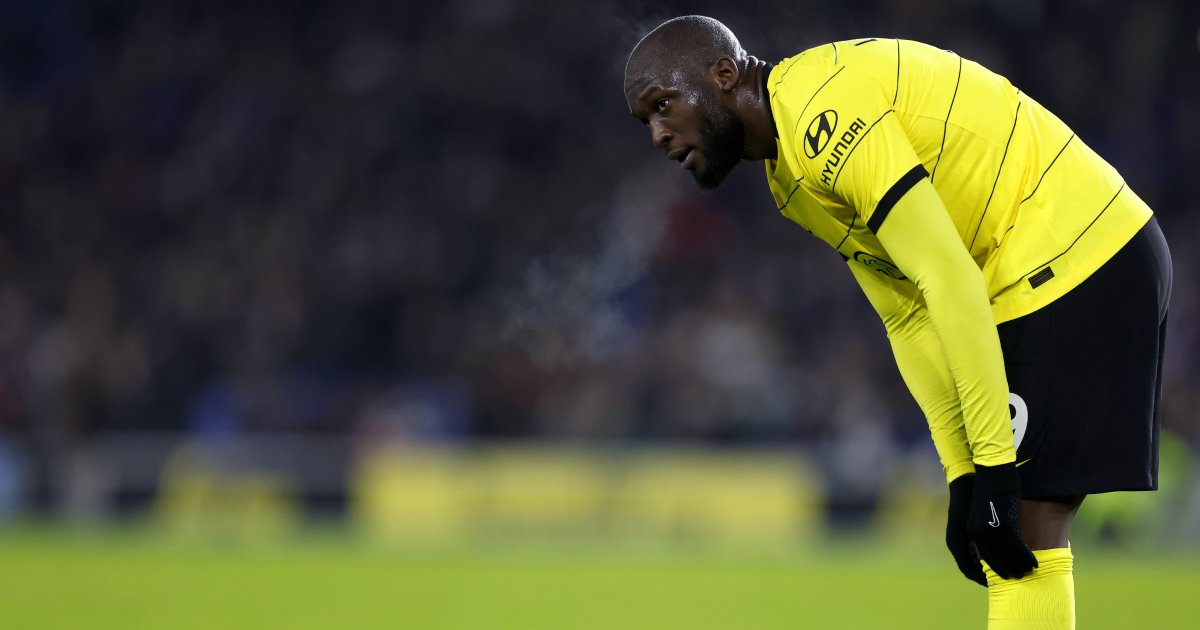 Romelu Lukaku is at best a passenger and at worst a parasite in this Chelsea team. Thomas Tuchel must consider a change.

Lukaku had two touches in the first half at Selhurst Park, including the kick-off, and seven in the entire game – the fewest for a player who played 90 minutes since Opta started collecting data back in the 2003-04 season. Of the Chelsea players to complete 90 minutes, Kai Havertz had the second fewest with 47. Lukaku spent the majority of the game – as he has done for at least the last two months with the Blues – with his hand in the air, barely moving.

Any runs he does make are in isolation. There’s no dropping deep then spinning in behind; no move to the front post then the back. It’s always one or the other. A player celebrated as a defender’s nightmare is currently incredibly easy to defend.

It’s as though his Chelsea teammates have given up on him. At the start of the season they were looking for passes into his feet and finding him in the channels. Now they’re back to slowly moving the ball from one side of the pitch to the other, as has been their wont for too long under Thomas Tuchel.

*Lukaku’s touch map from the first half at Selhurst Park. https://t.co/OBOdo5FfH7

There was a telling moment shortly after half-time, when Andreas Christensen intercepted for Chelsea and gave the ball to Hakim Ziyech, who had the option of a first-time ball for Lukaku in behind, but instead recycled it to the opposite side of the pitch. Lukaku flung his arms in the air in frustration, as we did watching. It’s those situations, on the half-turn, wrestling with a defender in the channel, that were Lukaku’s bread and butter at Inter Milan. We’ve seen it far too infrequently in Chelsea blue, and his teammates are as much to blame as he is.

He’s not a target man, and Chelsea’s lack of balls into his feet or on to his chest suggests that they’ve accepted that. But rather than utilising him in a different way, the right way – as a fast, strong, dribbling battering ram – they’re just not using him at all. Situations he found himself in at Inter Milan, breaking from halfway with grass in front of him, are fewer and far between at Chelsea. And it’s difficult to contrive those circumstances with the possession-based football Chelsea play. But when they do have those chances, they need to take them, otherwise Lukaku is at best a passenger, and at worst, a parasite.

Compared to Lukaku, Kai Havertz is perpetual motion. He lacked conviction again on Saturday, but he forces opposition players to make decisions, making runs for the team as well as himself, pressuring defenders into mistakes. If he doesn’t score, he aids the team. If Lukaku doesn’t score, he’s hampering them.

While Chelsea were by no means prolific last season under Tuchel, they were at least dynamic: winning possession high up the pitch, with forward players interchanging positions. They were lively. They were predictable and so, so boring on Saturday, and were very fortunate to claim all three points against Crystal Palace.

Ziyech was the difference once again. His 89th minute winner – a delicate volley at the back post – was his third in three Premier League games, after he had already had one ruled out for a marginal offside call against Lukaku. While the forwards around him grapple for any sort of form and consistency, Ziyech has been oustanding, in the sense that he’s been clearly noticeable more than especially brilliant. There’s still a sense that even he’s got far more to offer, and the fact that he’s so far ahead of his counterparts at Chelsea, is more damning of those counterparts than it is a feather in Ziyech’s cap.

Lukaku is not only chief among the Chelsea underachievers, but the longer he stays in the team, the more questions will be asked as to how much his underachievement is a hinderance to the progress of others. Tuchel spoke of an expected malaise from his team after their Club World Cup exploits, and as it turned out, this was a huge win for Chelsea ahead of a very big week, in which they play Lille in the Champions League before the League Cup final. But Tuchel must either get his team playing to his £100m striker’s strengths, or drop him, as Lukaku’s inertia is sucking the life from his team.