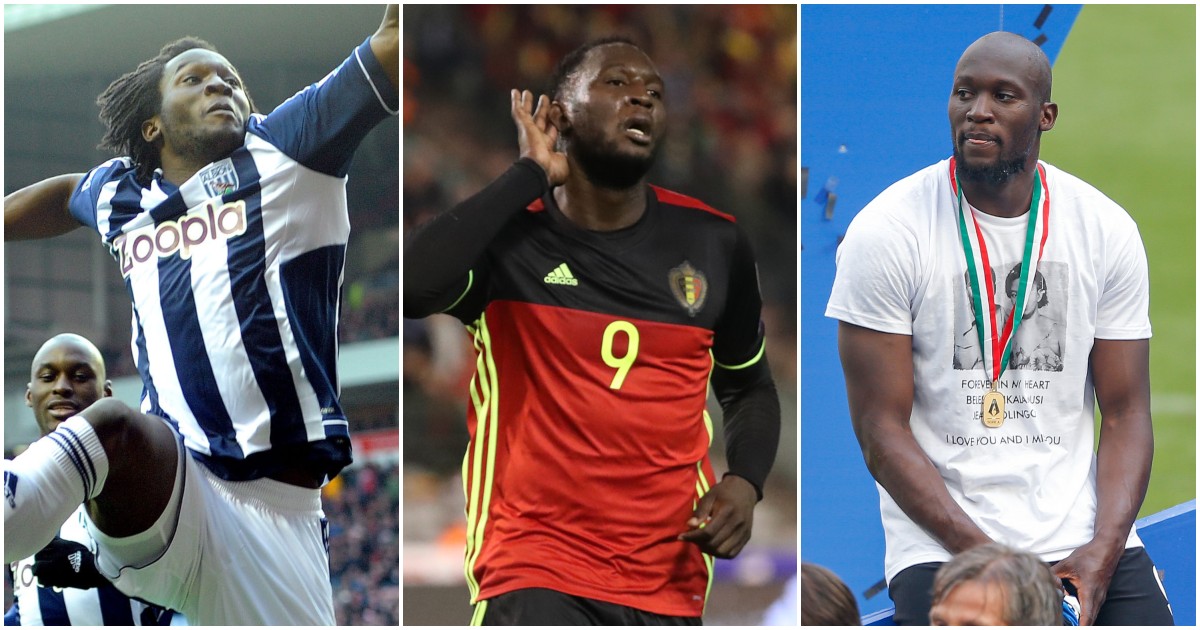 Romelu Lukaku is back at Chelsea, where many feel anything less than 30 goals would be a failure. He should be used to such critics by now.

Who’s this then?
Romelu Menama Lukaku Bolingoli is a 6ft 3ins, 28-year-old Belgian striker who has just signed for Chelsea for a little short of £100million. Born in Antwerp, he has played for six different clubs: Anderlecht, Chelsea, West Brom, Everton, Manchester United and Inter Milan. He is returning to Chelsea for a second time, having played just 15 games for them previously before being farmed out on loan and then sold.

He played two full seasons for Anderlecht from 2009 to 2011, scoring 41 in 98. It was here that Chelsea first saw him and snaffled his signature, only for Lukaku to find himself pushed into the reserves until the end of the season. Given he was really great, he was a bit put out by this turn of events and went to West Brom on loan in 2012 where he flourished, even scoring a second-half perfect hat-trick against Manchester United in a legendary 5-5 draw to crown Sir Alex Ferguson’s last game in charge. He ended up with 17 in 38 but this still wasn’t good enough for the good burghers of Chelsea who loaned him to Everton the next season. What was it they didn’t like about him?

He spent 2013/14 at Everton, bagged 17 in 38 and was generally scarily impressive, helping them to the dizzy heights of fifth. So Everton bought him for £28million as Chelsea had no use for prolific strikers. Lukaku repaid them with 20 goals in 48 games and began the hot streak that is still burning now. His 87 in 166 for the Toffees, scoring in nine consecutive games at Goodison Park at one stage, even made the notoriously dysfunctional Old Trafford transfer people sit up and take notice. Out came £75million and he moved to Old Trafford.

It was an odd two years for Lukaku at the Theatre of Falling Apart At The Seams. Despite scoring 27 in 51 in his first season and 15 in 45 in his second, he seemed to be forever the butt of criticism which rankles with him to this day. There was some feeling that he was all physicality and not enough skill. Indeed his lack of touch was widely disparaged. This was ridiculous. No-one else seemed to be judged in this way.

Jose Mourinho was sacked and Ole Gunnar Solsjaer took over but seemed to prefer Marcus Rashford.

By now, our man was the highest goalscorer in history for Belgium but even so, he was sold to Inter for £74m, money which it now seems they didn’t really have. A quick 64 goals in 95 games later and he was once again acquired by Chelsea, presumably having now proved himself, aged 28, nine years after they had originally signed him.

For his country he currently has 64 goals in 98 games.

However, for one of the finest and most prolific goalscorers of his era, his trophy cabinet is very bare. It holds just a Belgian league title with Anderlecht and one Serie A championship, though he was voted the league’s MVP last year.

There is an abiding feeling that Lukaku has been somewhat underrated, at least until he got to Inter Milan.

Why the love?
To listen to Lukaku talk, he is easily one of the most intelligent, engaging people in football and one who has had to overcome many struggles to get to his vaunted position today. Hard to begrudge him his wealth now when he started out so poor.

He was brought up in absolute poverty, rats in the apartment, sleeping on the floor, his mother watering the milk to make it go further, going without TV, electricity or heating. Having to pretend he’s seen the Champions League on TV like the other kids when they didn’t even have a TV.

Coming home to find his mother weeping, he promised them, even at age six, that as soon as he could become a professional at 16, things would change financially. And he was as good as his word.

A big kid, he was often ID-ed by the opposition who thought he was older. He seemed literally hungry when he played, scoring prolifically in youth football and averaging over two goals per game.

On top of his hardships there was the typical racism. When playing well he was called Belgian, when not he was Congolese. That he fought all of these battles and won through shows we are not looking at any ordinary player. This is one determined, ruthless man.

When it comes to playing football he just has so much presence. One of those players when he gets the ball, you move to the front of your seat. Over the years it is arguable there has been some subconscious racism at play by some, concentrating purely on his physicality and underplaying or ignoring all the skilful, intelligent parts of his game. Which it isn’t to say that, as a big unit, he isn’t absolutely thrilling when he runs at defenders, or when he has defenders bouncing off him at corners.

Sometimes used as a target man, that isn’t his natural or best role. He can run at and beat people; he can work on the wing, too, cutting in to devastating effect. As he’s got older, he seems to have got even better close control and is now providing assists as well as huge amounts of goals.

He’s especially exciting when he receives the ball on the turn around the halfway line, looks up, sprays a ball out wide right and sprints for the box. Must be terrifying to defend against. You know he can score with either foot or power in a header.

In addition to his native French and Dutch, he can speak fluent English, Portuguese, Italian, Spanish and a Congolese Swahili dialect, and can also understand German. Which is jolly clever of him, isn’t it? Some people seem to just have a natural affinity for speaking different languages.

What the people say
There is something a bit lumpy about a player going back to a club where some fans either rejected him a while ago, or the player was never given a decent chance in the first place, and now being welcomed back with open arms once he’s proved himself at other clubs. It seems incredibly bourgeois. But then again, the player has a chance to stick it right up all the old doubters and football’s collective memory grows ever shorter.

He does do a fair bit of engagement with the fans, with my favourite below. Unfairly pilloried for being the only footballer on the planet who occasionally miscontrols the ball. Would have him back at EFC in a flash. 😥
Unplayable at times and fantastic scoring record. pic.twitter.com/UPYo5YekVe

‘The football media just upped and decided he was a traditional number 9 due to his physique. He is much more than that, Jose/Ole.’

‘Difficult to know how good he really is. Scored lots of goals but none you would call career defining moments in big games that he will be remembered by. His career has another level to go before he can be considered world class. He will probably take that step this year.’

‘Even though he has moved for silly numbers, seems like a lovely person who happens to be a rather brilliant footballer. I always want him to do well. And I hate Chelsea.’

When he had him at #WBA it was like a cheat code Scoring and putting Carragher on his bum for his first goal was epic. His hat trick against United in his last a sign of his future quality. Seems to be held to a different standard by many. Sadly we know why. Few better. Top bloke

‘The last man to score against an Alex Ferguson team in a 5-5 draw. I hope this doesn’t get forgotten amid the nine-figure fee Chelsea have just paid to buy him back.’

‘The ultimate professional. A forward who runs all day and never complains. He is the Belgian Rooney in my opinion. To play for Mourinho and Conte, two of the hardest and defensive managers shows what Rom brings to the table. Glad to see him back in the PL.’

‘Famous old clubs in their own right, but seems increasingly baffling a player of his stature spent 5 years of his career at West Brom and Everton. So underrated.’

‘I am not sure this is what is good about him but annoyingly he loves scoring against West Ham.’

‘Surely Daniel Storey will flood you with tweets now.’

… his time at United was one of a huge missed opportunity. Playing up front for THAT Mourinho team must have been absolute hell. To dig him out for putting up with that dross is to pick on the wrong guy, if you ask me. He's the complete package, as a forward.

Three great moments
His creativity and teamwork is often overlooked:

Future days
It still feels odd that he played for West Brom, somehow. Chelsea are certainly getting Lukaku as he hits the peak of his powers and the expectation is that he will tear up the Premier League in the coming nine months. Quite what this means remains to be seen. I think many are expecting him to net 30 or more goals as a minimum. His fans might worry that a mere 25 may be seen as some sort of failure. Has the undervaluing and over-criticism gone now, or will it rear its ugly head again?

Seems to have managed to avoid any serious injury to date. Some players get lucky, others you just feel are innately strong and resilient. Including internationals, he’s already played 604 games. That’s more than many players clock up in whole career but he’s only 28 with a good ten years in him yet. As such it seems likely that he’ll get near to or over the 1,000-game mark as long as he avoids serious knackage.

As an Anderlecht man, he may choose to end his career back on Belgian soil but there are a lot of trophies to win for Chelsea over the next four or five years back in the Premier League. You wouldn’t bet against him scoring a brace against Manchester United after the hard time he had there, just as a reminder of what they could still have in their front line.

His is a success story we can all feel good about.