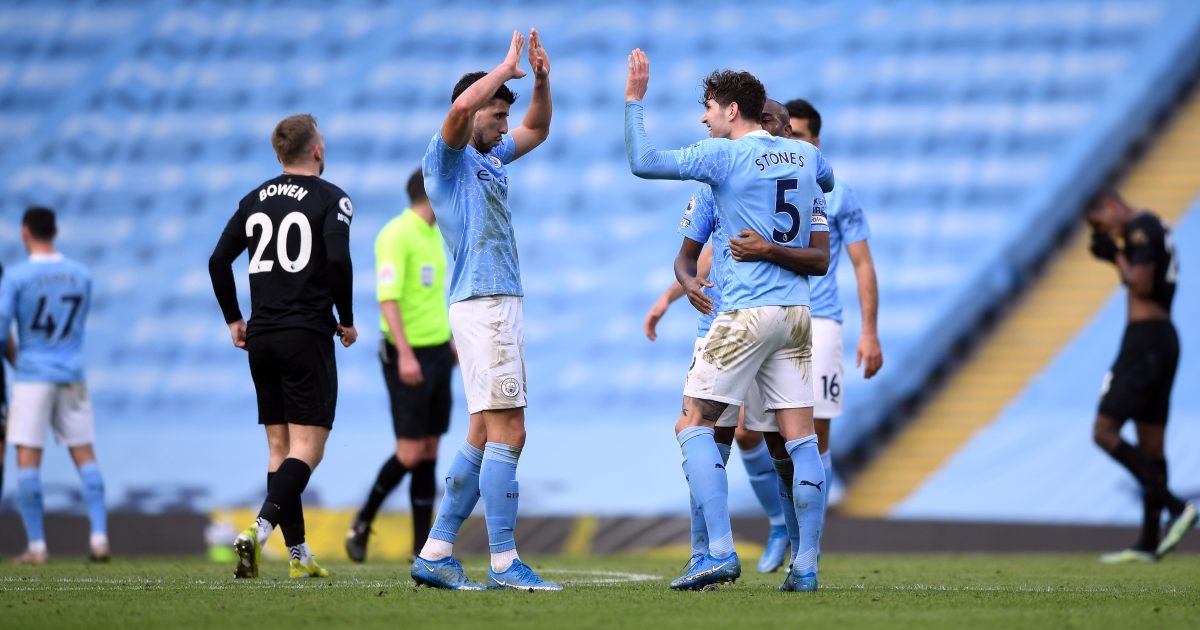 John Stones continued his remarkable transformation this season as he and Ruben Dias stepped up once again to increase Manchester City’s lead at the top of the Premier League to 13 points. Their defence was finally breached against West Ham but their partnership continues to blossom in time for spring.

West Ham arrived at the Etihad Stadium on Saturday with the two form sides in the division going head-to-head. The Citizens and the Hammers have the most points of any teams in the Premier League since the turn of the year. David Moyes’ side had won seven of their nine league fixtures in 2021 before facing City, while Pep Guardiola’s outfit had won 19 successive matches in all competitions heading into the game. And they extended that run on Saturday to 20 with West Ham giving them a good game before City’s class eventually told.

Dias and Stones have formed an amazing partnership in the Premier League this term that has seen Man City concede just 16 goals, including Michail Antonio’s equaliser at the end of the first half. The West Ham goal was the first goal City have conceded at home since December 15 when Dias put through his own net against West Brom and the first in 12 hours at home in the Premier League. Stones – who has struggled to cement his place under Guardiola until this season – has finally found a partner who compliments him with the superb Aymeric Laporte struggling to get back into the team.

4 – No Premier League defender has scored more goals in all competitions this season than John Stones (4), with all four of his strikes coming in 2021. Resolution. #MCIWHU pic.twitter.com/IPhvFrtgX3

The positioning and reading of the game from both players is phenomenal, with the pair prepared to throw their bodies on the line and make tough decisions under pressure. It’s clear they already know each other’s game well with their confidence allowing them to help their side out at the other end of the pitch too. Sergio Aguero was making his first league start since October against West Ham but that was completely overshadowed by the clinical nature of Dias and Stones’ play. Dias added to his goal for Benfica and a brace for Portugal in November with his first City finish on Saturday. Stones, who shocked everyone with a brace earlier in the season against Crystal Palace, couldn’t have taken his goal better against West Ham, with a first-time side-foot finish.

Paul Merson can’t see past Dias for Premier League player of the season and it’s hard to disagree with the former Arsenal playmaker. He said: “When you watch him now, I think players are fearful of him. They get him in a one on one situation, and they think they cannot get past him. He’s got that fear factor.” Manchester United midfielder Bruno Fernandes might have something to say about that yet with Dias’ compatriot also in red-hot form. But Merson reckons Man City are “a far better team than what they were last season” thanks to Dias. In the same way Virgil van Dijk has transformed Liverpool? If nothing else Dias has helped get the best out of Stones as well as maintaining his own excellent form,

Former England defender Lee Dixon recently said Stones was “too talented for his own good” and that City had previously allowed him to “get on with it”. It may be the case that Stones is now keeping it simple but there’s also been a psychological aspect to his improvements. The England international looks more assured and confident in the way he plays, while you can see the added enthusiasm in his body language, celebrations and interviews.

27 – Man City are unbeaten in their last 27 games in all competitions (W24 D3), the second longest such run in their history (28 games, Apr-Dec 2017). They have now also extended the longest ever winning run by a top-flight side in all comps to 20 matches. Astounding. pic.twitter.com/wLtXPXK2R7

With Man City scoring fewer goals this season, in part due to the form of Raheem Sterling and the injury to Aguero, clean sheets have been more important than ever for Guardiola’s side. To know his two best defenders can also chip in with goals in their hour of need will be of huge comfort to the Spaniard, who oversaw his worst ever start to a season as a manager earlier this term. To turn this season around in the manner he has has been nothing short of remarkable and Guardiola deserves huge praise for that. The Citizens were sat in 14th-place heading into their 5-0 demolition of Burnley at the end of November, while they are now 13 points clear at the top of the Premier League table with his team currently looking unbeatable.

Guardiola, who made seven changes from City’s victory over Gladbach in the Champions League in midweek, could guide his team from the worst start in his managerial career to his most successful season. It would surely be one of the most extraordinary shifts in fortune ever seen in the Premier League, with glory in the Premier League, Carabao Cup, FA Cup and Champions League still on the table.