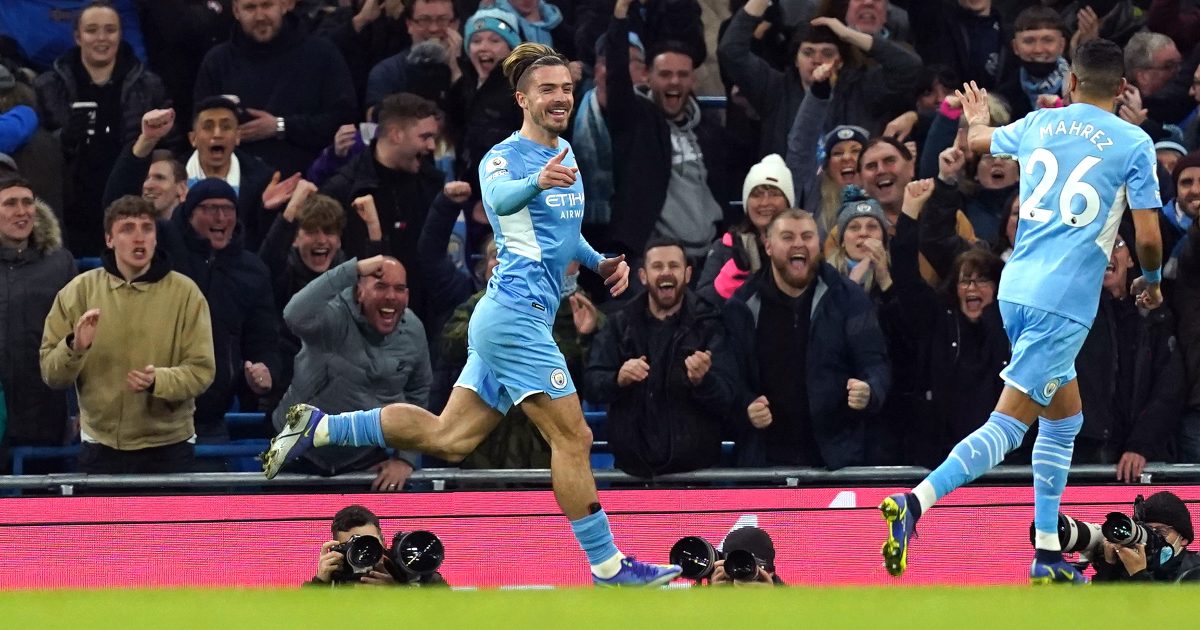 Jack Grealish added to his number in the numbers game fight for supremacy at Manchester City. Mind you, must of them added to their number against Leeds…

£100million and no Premier League goal since August. But Pep Guardiola promised goals were coming – “absolutely, not probably” – and one came against Leeds, in perhaps Grealish’s finest performance for Man City. And yet, he was inferior to every other City forward. Grealish was good, the rest were better…

It always looks fun playing in this City team; this game must have been an absolute hoot. There was presumably greater tactical structure than ‘f*** it, go where you want’, but it didn’t look like it. Rodri sat in front of a back four, while the five in front of him came deep, went wide, ran beyond, and completely tore Leeds apart. The difference in quality was as stark as you will ever see in a Premier League game. It was men against other men much worse at football.

Leeds’ injury problems essentially decided the outcome before it started. With Kalvin Phillips, Patrick Bamford and more than one centre-back, this would have been a completely different game – as it was last season, when Leeds won 2-1 at the Etihad. The same team gave Chelsea a huge scare on Saturday, but Leeds met the Blues at their lowest ebb of the season, while City were coming off the back of five wins on the bounce and in one of those moods where it’s impossible to imagine how they would ever fail to win a game of football.

Kevin De Bruyne made his first start since the win over Manchester United on November 6, scored one brilliant goal before nearly taking the net off with a stunning second, and was predictably ominous besides. Bernardo Silva had another sparkling half of close control, dribbling and extreme pressing before being replaced by Ilkay Gundogan, who is among the best of 2021. Phil Foden was ‘positioned’ as the false nine for the majority, showed three of four absurd touches among his standard exemplary ones and scored with a scuffed shot scuffed less than Stuart Dallas’ scuffed attempt at a clearance off the line. Riyad Mahrez scored via a deflection, produced some sublime crosses and one particularly ludicrous chipped pass for Gundogan.

For some players, in some teams, it’s hard to quantify their contributions. That was the case for Roberto Firmino at Liverpool for a couple of seasons, for example. He didn’t score or assist all too frequently, but his worth to the team wasn’t doubted (until more recently, when it was). There are no equivalent examples of that under Guardiola at City.

“He doesn’t have to score,” Guardiola said when asked about Grealish this week. “What he has to do is play like he knows what to do, feel that his contribution is helping to win games and the rest will come.” But it’s hard not to focus on tangible contributions when the rest of your teammates are producing consistently ridiculous numbers. Mahrez has nine goals, Bernardo Silva has seven, Raheem Sterling has six, Foden and Gabriel Jesus have five each. A team going for the title without a centre-forward has to make up the goals almost everywhere else. Guardiola may say publicly that goals aren’t the be all and end all, and even if he hasn’t made that clear privately, Grealish will know the score – you can’t spend time with this group of players and not be burdened by the weight of expectation.

The problem for Grealish is that he must avoid the temptation to force it. Shooting and not scoring when a teammate is in a better position is a big no-no. At Aston Villa his audacity was welcomed in the most part as he was so comfortably the best player; the man most likely to create something in any situation. At City, as proven by one goal from 24 shots ahead of kick-off against Leeds (the worst ratio of any City player to have scored a goal this season), they’re better off if he doesn’t shoot.

As more and more City players got on the scoresheet on Tuesday night, Grealish’s goal became less and less significant. But that shouldn’t matter to him. Grealish added to his number, and at Man City, it’s a numbers game.